Louisville heads for another night under curfew amid Breonna Taylor protests 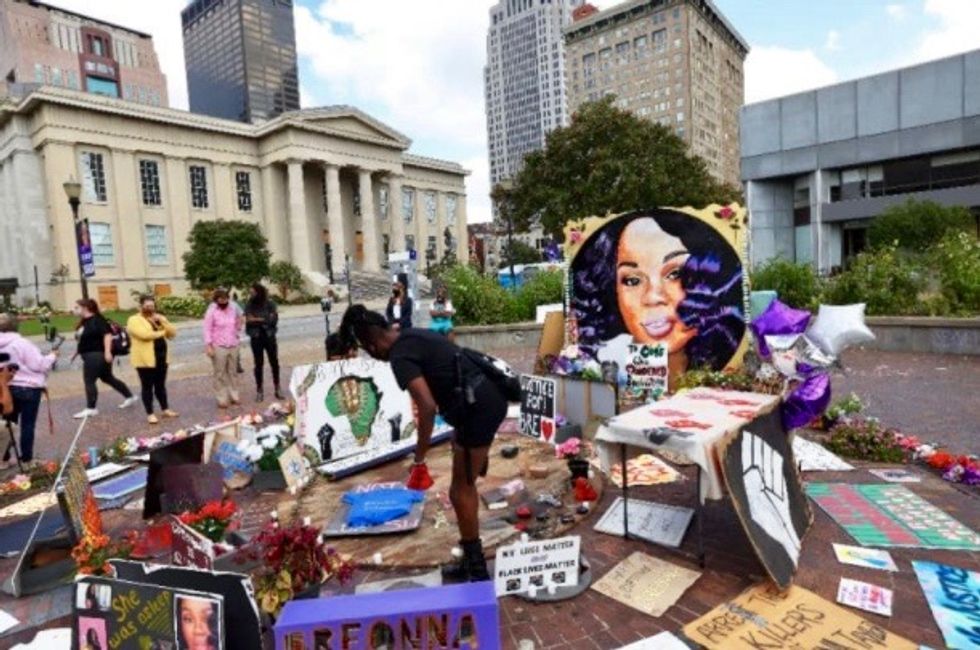 Louisville was headed for another night under curfew Thursday after the Kentucky city was rocked by protests over the news that no one would face charges for the police killing of Breonna Taylor -- a decision her family lawyer blamed on the "devil of racism."

Protests erupted in Louisville and other cities around the United States on Wednesday after a grand jury decided not to directly charge anyone in connection with the killing of Taylor, a 26-year-old black woman who was shot dead in her apartment by police earlier this year.

Taylor's death has become a rallying cry for the Black Lives Matter movement and the grand jury decision sent fresh demands for racial justice billowing across the country.

Thousands of people flooded the streets of Louisville, Taylor's home, to demand justice for the emergency room technician after the grand jury announcement.

The demonstrations began peacefully but quickly degenerated into violence as protesters clashed with police in riot gear.

Fischer said one was treated for a leg wound and released from the hospital while the other -- shot in the abdomen -- had undergone surgery but is expected to recover.

"What we saw last night with the two officers being shot is obviously completely unacceptable," the mayor said.

Louisville police chief Robert Schroeder said a suspect, Larynzo Johnson, had been arrested and charged with two counts of assault and 14 counts of "wanton endangerment."

Schroeder said there had been a total of 127 arrests across the city, Kentucky's largest with a population of 600,000, and at least 16 instances of looting.

Much of downtown has been closed to traffic, and several shops boarded up in anticipation of more violence.

Taylor was shot dead on March 13 after three plainclothes policemen appeared at her door in the middle of the night to execute a search warrant.

Taylor's boyfriend, who was in bed with her on the night she was killed, exchanged fire with the officers, who he said he thought were criminals.

"Until we afford Black people the basic rights promised by our founders — life, liberty and the pursuit of happiness — and end the rampage of the devil of racism, we will know no peace," her family's lawyer Ben Crump said in an opinion piece in The Washington Post.

Although the city center was calm on Thursday morning, Marcus Reed, a black 52-year-old barbecue restaurant owner, was braced for more trouble ahead.

"They can kill us and get away with it and keep doing it," he said. "They just get a spank on the wrist."

President Donald Trump, who is campaigning for reelection on a "law-and-order" platform and has repeatedly stoked fears about violence, tweeted that he was "praying" for the officers who were shot.

Seething protests have rocked America's cities for months, with the movement's anger fed by a stream of deaths of black people at the hands of police, and exacerbated by badly fractured national politics and inflammatory rhetoric by Trump.

Kentucky Attorney General Daniel Cameron said the two officers who had fired the shots that killed Taylor had done so in self-defense, and would therefore not be charged.

Cameron called Taylor's death a "tragedy," and said he knew "not everyone will be satisfied with the charges."

He also contradicted reports that the officers had executed a "no-knock" search warrant on Taylor's home, bursting in without warning.

"They did knock and announce," he said, citing a witness.

The civil settlement reflected the public pressure and emotion surrounding her death, which came about two months before that of George Floyd, a black man who was killed by a white police officer in Minneapolis, sparking nationwide anger.