Mick Mulvaney predicts 2 presidential debates will be canceled: ‘It’ll be the only one’ 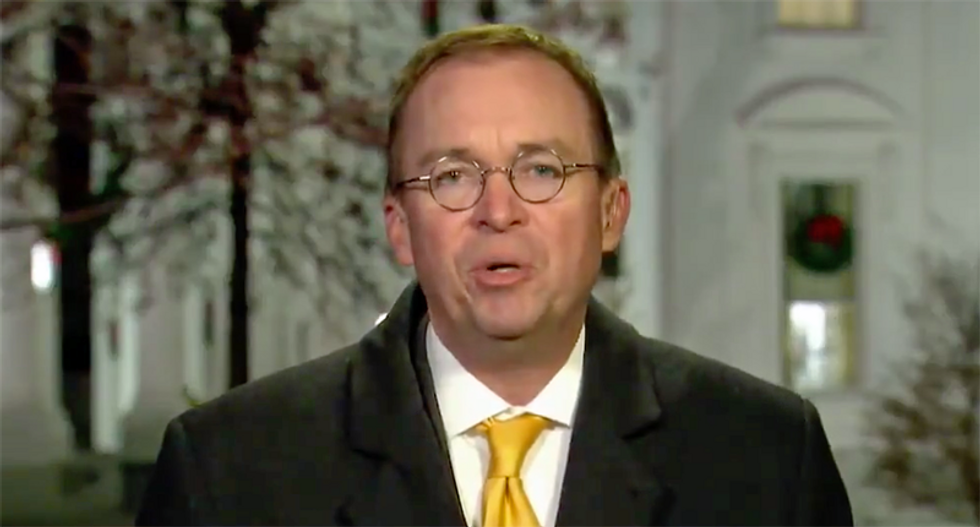 President Donald Trump's former chief of staff, Mick Mulvaney, seemed to indicate that his former boss might dodge additional presidential debates if he bombs in the first debate as he did in 2016.

In a conversation with Irish journalist Caitriona Perry, Mulvaney agreed with speculation about the election saying that because of the number of mailed-in ballots, the results of the election may not come for a few days. Somehow that makes Trump question the legitimacy.

When Perry asked about Trump's conspiracy theory that former Vice President Joe Biden is on debate performance-enhancing drugs, Mulvaney chuckled and said he thinks it "would be a lot of fun."

"I know the president. I know the president's sense of humor. I know not all folks understand him or understand his sense of humor," said Mulvaney. "I think his point was that, um, just as his health was an issue at certain points in his presidency -- you've seen newspapers in our country almost ad nauseam, 'did he have minor strokes,' 'why did he go to the hospital, such and such?' We think that the health of a president is always a relevant issue. And for that reason, the health of a candidate for office is always a relevant issue."

Mulvaney seems to be trying to have it both ways, claiming Trump is joking, but that his question is a legitimate one because Americans questioned why Trump was rushed to Walter Reed in the middle of the night, why he slurs his words, has trouble walking on steps or down a ramp, and needed to use two hands to drink a bottle of water.

Mulvaney said that it would be "fun" for one of the candidates to take the drug test and then challenge the other and that it's merely how people in the United States "have fun with our races." In fact, Trump is the only candidate in history to demand a drug test before a debate. He first did it to Hillary Clinton in 2016 and is doing so again with Biden.

The former Trump aide closed by saying that he thinks Biden will do so badly that it'll be the end of his campaign and as a result, there won't be any other debates.

"I think it may be the only one," he casually said.