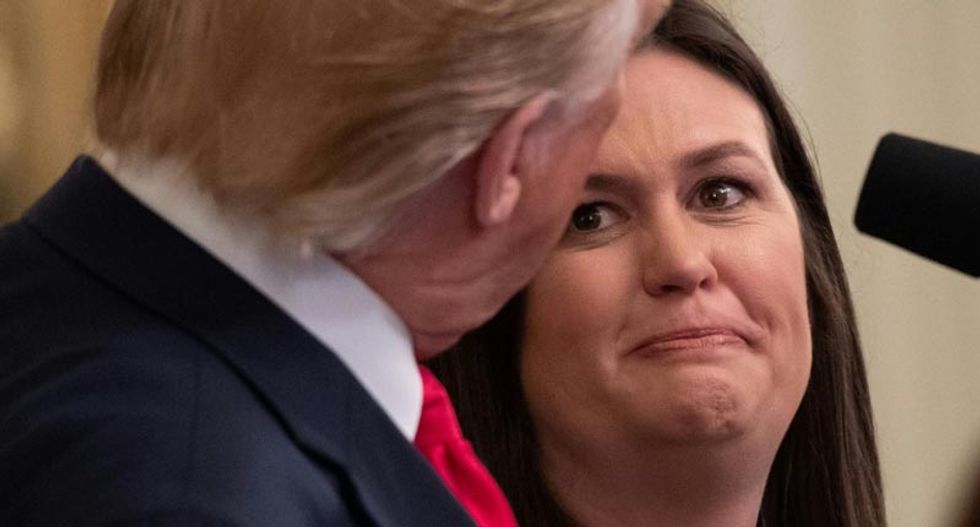 "Donald Trump has the greatest respect for the men and women of our armed forces," Huckabee Sanders, who is planning a run for governor in Arkansas, says in a recorded video. "I've traveled all over the world with the President and watched him interact with men and women of our military. I've seen him fight to make sure they have the resources they need."

"That story couldn't be further from the truth," she says, referring to the bombshell in The Atlantic, which was confirmed by multiple news outlets, including NBC News, The Washington Post, CNN, the Associated Press, and even Fox News.

In response to Huckabee Sanders defending Trump, many reminded her of her horrific performance as White House press secretary, when she lied regularly for Trump. Others noted in her new memoir she calls a colleague a "foulmouthed Jew." And others point to her documented lie to Special Counsel Robert Mueller.

The funny thing is that the lie that Sarah Sanders was exposed as having told by the Mueller report was a close cou… https://t.co/jn1MuJw1js
— Cody Fenwick (@Cody Fenwick) 1599448949.0

We remember when you set up Jim @Acosta with that fake tape that supposedly showed him hurting that Intern over the… https://t.co/5i1K4IupHm
— Thomas Paine (@Thomas Paine) 1599466530.0

ok, we've entered the comical stage of the suckers and liars story. Next we'll have @seanspicer do an interpretive… https://t.co/LO9anSQSMz
— Joe Lockhart (@Joe Lockhart) 1599439274.0