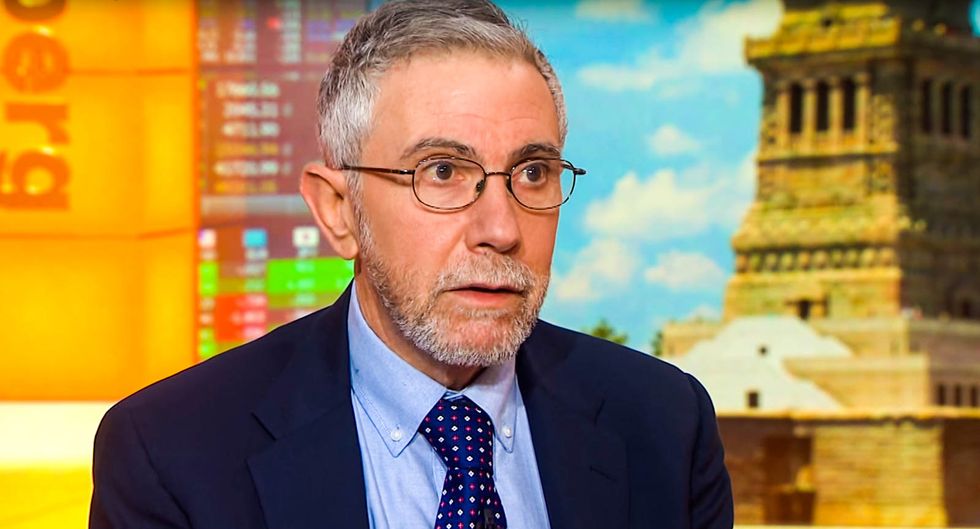 Anti-Muslim hate crimes soared after 9/11, and thousands of Muslims in the U.S. were detained—and some tortured—in George W. Bush's futile anti-terror dragnet.

New York Times columnist Paul Krugman faced withering criticism Friday after he claimed that there was no "mass outbreak of anti-Muslim sentiment and violence" following the September 11, 2001 terrorist attacks on the United States.

"Overall, Americans took 9/11 pretty calmly," Krugman tweeted on the 19th anniversary of the attacks that left nearly 3,000 people dead in New York, Washington, D.C., and Pennsylvania, and led to U.S. wars of choice in Afghanistan, Iraq and elsewhere in which at least hundreds of thousands—and perhaps as many as 2 million—people have died in predominantly Muslim countries.

On social media, Muslim Americans were quick to share their stories of Islamophobic attacks and bigotry suffered after 9/11.

Notable to who? I was a sophomore in HS & told not return to school until students/factulty felt ready. I was told… https://t.co/wPpBBtwnKJ
— Tahanie Aboushi (@Tahanie Aboushi)1599832129.0

Today is a day for remembering and reflecting on those who were lost. Not for rewriting history or erasing the harm… https://t.co/njdBGBDGHf
— ACLU (@ACLU)1599843817.0

There was a dramatic increase in anti-Muslim violence in the months after 9/11, a level of attacks that would not be surpassed until after the election of President Donald Trump. According to the FBI, self-styled "patriots" burned homes of Muslims or people they thought looked like Arabs, vandalized sacred buildings, and killed Muslims and people mistaken for them. The FBI identified 1,501 anti-Muslim hate crimes in 2001, up from 354 in 2000.

Krugman also claimed that President George W. Bush "tried to calm prejudice, not feed it." However, the Bush administration, taking advantage of the nation's collective fear following the attacks, proceeded to lock up thousands of foreign Muslims in "preventive detention" while requiring 80,000 mostly Muslim foreign nationals to register with federal authorities in the hopes that they might net some terrorists. They didn't catch a single one.

The fact that @paulkrugman and his family weren’t personally persecuted after 9/11 doesn’t mean that “Americans too… https://t.co/nBFtCQKYvp
— Glenn Greenwald (@Glenn Greenwald)1599827747.0

Scores of innocent men were rounded up and jailed at the Metropolitan Detention Center (MDC) in New York, which has been referred to as "Brooklyn's Abu Ghraib." Conditions at the MDC were shockingly inhumane. Prisoners, whose "crimes" were almost always minor immigration violations, were held without charge, presumed guilty until proven innocent, and often caged in solitary confinement for 24 hours a day with bright lights shining the entire time.

"We were deprived of our rights and abused simply because of our religion and the color of our skin."

Prisoners reported being shackled, beaten, slammed head-first into walls—one detainee's front teeth were smashed out—and locked outside in the dead of winter in light clothing. They were fed bad food and barred from properly practicing their religion. Some were sexually humiliated in front of female guards. Others were sexually assaulted—one detainee was sodomized with a flashlight that was covered in blood when removed from his body.

Much of this horrific abuse was videotaped and substantiated by the Justice Department, yet only two prison officials were fired in connection with it.

Relatives of Japanese-Americans interned in U.S. concentration camps during World War II for no other reason than their ethnicity saw alarming modern parallels and courageously objected to the treatment of Muslim detainees. They later filed a court brief protesting that the detention ruling "overlooks the...declaration by the...Congress and the president of the United States that the racially selective detention of Japanese aliens during World War II was a 'fundamental injustice' warranting an apology and the payment of reparations."

Five men detained and deported after 9/11 later won a $1.26 million settlement from the U.S. government. "We were deprived of our rights and abused simply because of our religion and the color of our skin," said one of the men, Yasser Ebrahim, from Egypt in 2009.