Professor who told Trump to let her finish says she cried after the event: ‘He didn’t answer any of our questions’ 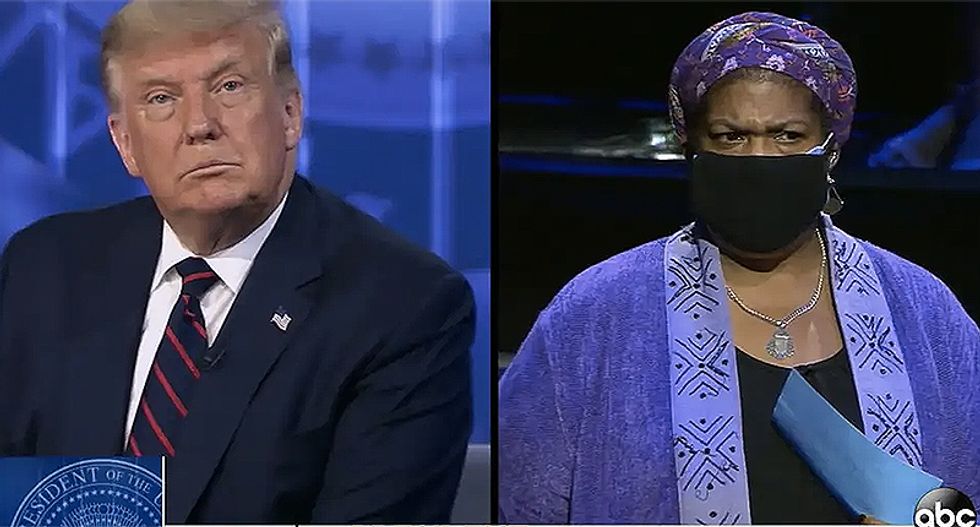 Assistant Professor Ellesia Blaque was the woman who shut down President Donald Trump when he tried to interrupt her during the ABC Town Hall on Tuesday. In an interview with MSNBC's Joy Reid, she confessed that she went outside and cried after the event was over because of the hopelessness.

The Kutztown University educator explained that she felt like she was giving a class lecture, and one of her students tried to interrupt her.

"When you said stop and let me finish my question, every Black woman in America knew you, we all know you," said Reid introducing Blaque. She asked if Blaque ever felt like she got an answer to her question.

"Actually, I walked away, and when I got outside of Constitution Hall, I found the first wall to sit down on and broke down and cried in frustration and anger. Because he didn't answer anyone's question, let alone mine, and he ignored us like we had no value. That -- like he was just using us as a catalyst to say what he wanted to say about himself as normal, as usual. And to push his own agenda, which is misinformation. Disinformation. Manipulation of language and it was tragic for him to do that because I really did go there with the -- with an open mind. My problem was, I didn't know if I was going to vote or not. It was never a question of will I vote for President Trump or Biden. It was a question of, will I vote or not?"

She went on to say that she teaches both history and literature and has read and taught about American slavery and understands the struggles that Black people face in the U.S.

"I know the struggles that we have been through, and we've already fought and won this war multiple times," Blaque said. "To have to fight it and win it again in the 21st century is horrific, and I'm getting old. My disease is wearing me down."

She said that she had a driver who took her home after the event and who talked about how excited he was to vote in his first election. When she got out of the car, even though she was frustrated and upset, she realized that not voting was disrespecting her ancestors.

"If he's excited to vote, I have to be excited to vote, too, and I have to take the risk and believe in that Constitution I just taught my students," said the professor. "I'm still teaching my students right now. So, I decided, I'm just going to bite the bullet and vote for Biden and pray that -- for once in the lifetime of Black Americans, that things will change as they did under the chief court in the '60s and LBJ. Because we need drastic, drastic change, you know, we can't continue to be abused by people in the street, simply because of the color of our skin, where we live, where we're from, how we speak. All of this is inappropriate because we never did anything to deserve what it is that we get, and yet another century has come and we suck it up, and we're gracious about it. I don't want to be gracious any more I want change, and I want it now."

See the powerful video below: