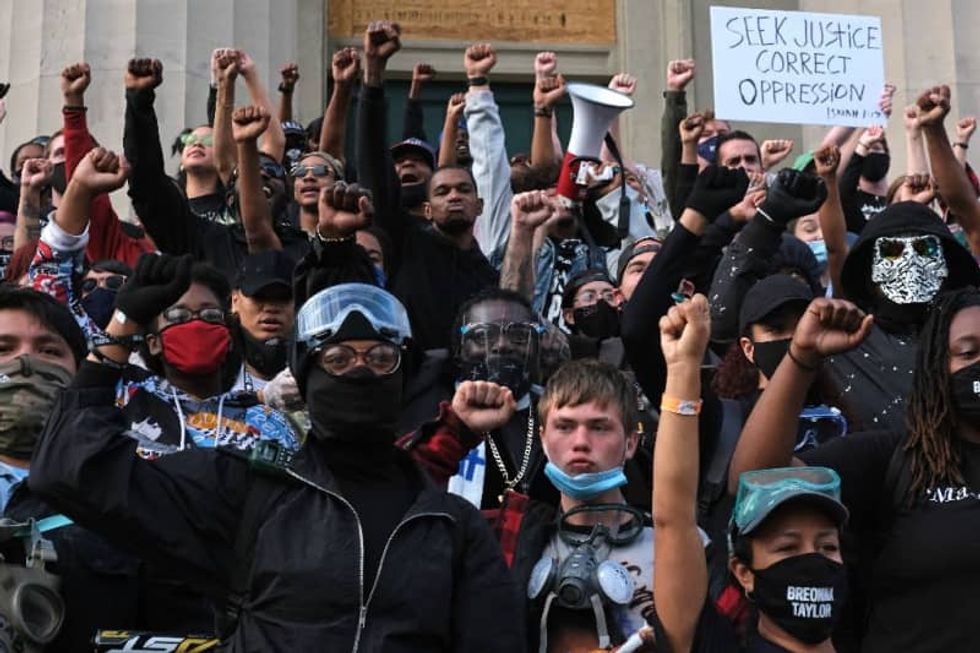 More than 1,000 people defied a second night of curfew in the US city of Louisville to protest over the lack of criminal charges in the police killing of Breonna Taylor, with some seeking refuge in a church.

Two officers were shot during clashes in Louisville a day earlier, after authorities announced a grand jury had decided not to charge anyone in connection with the death of Taylor -- a 26-year-old black woman shot dead in her apartment by police earlier this year.

"Until we afford Black people the basic rights promised by our founders -- life, liberty and the pursuit of happiness -- and end the rampage of the devil of racism, we will know no peace," her family's lawyer Ben Crump said in an opinion piece in The Washington Post.

Over a thousand people protested Thursday evening in the city center, much of which was closed to traffic, with several shops boarded up in anticipation of more violence.

"No way we can be peaceful any longer," said Michael Pyles, a 29-year-old black man who said he has been protesting for 120 days, and had a 9mm handgun on his hip.

"We're out here to protect our people and the people who support us," he said. "We are under attack."

Grace Pennix, 19, who is also African American, said she can't help but place herself in Taylor's shoes.

"I often be passing by my front door and thinking, dang, the police could be coming at my door and shoot me and kill me just like they did with Breonna.

With a 9:00 pm to 6:30 am curfew in place through the weekend, about a hundred protesters in violation of the rule Thursday sought refuge at the First Unitarian Church late Thursday.

Heavily armed police surrounded the building, and helicopters whirled overhead, but the demonstrators were allowed to leave around 11 pm.

Authorities arrested at least 24 people on charges including unlawful assembly, failure to disperse and riot in the first degree, police said, though the city appeared to avoid the violence of the previous evening.

Taylor's death has become a rallying cry for the Black Lives Matter movement and the grand jury decision sent fresh demands for racial justice billowing across the country.

Two police officers were shot and wounded Wednesday as thousands flooded the streets of Louisville to protest the grand jury's decision. Both are expected to recover.

Louisville police chief Robert Schroeder said a suspect, Larynzo Johnson, had been arrested and charged with two counts of assault and 14 counts of "wanton endangerment."

Schroeder said there had been a total of 127 arrests overnight Wednesday across the city, Kentucky's largest with a population of 600,000, and at least 16 instances of looting.

Taylor, an emergency room technician, was shot dead on March 13 after three plainclothes policemen executing a search warrant in the middle of the night burst into the apartment.

Taylor's boyfriend exchanged fire with the officers, who he said he thought were intruders.

President Donald Trump, who is campaigning for reelection on a "law and order" platform and has repeatedly stoked fears about violence, tweeted that he was "praying" for the officers who were shot.

Seething protests have rocked America's cities for months, with the movement's anger fed by a stream of deaths of black people at the hands of police, and exacerbated by badly fractured national politics and inflammatory rhetoric by Trump.

Kentucky Attorney General Daniel Cameron said the two officers who had fired the shots that killed Taylor had done so in self-defense, and would therefore not be charged.

The city of Louisville settled a wrongful death suit with Taylor's family for $12 million last week.