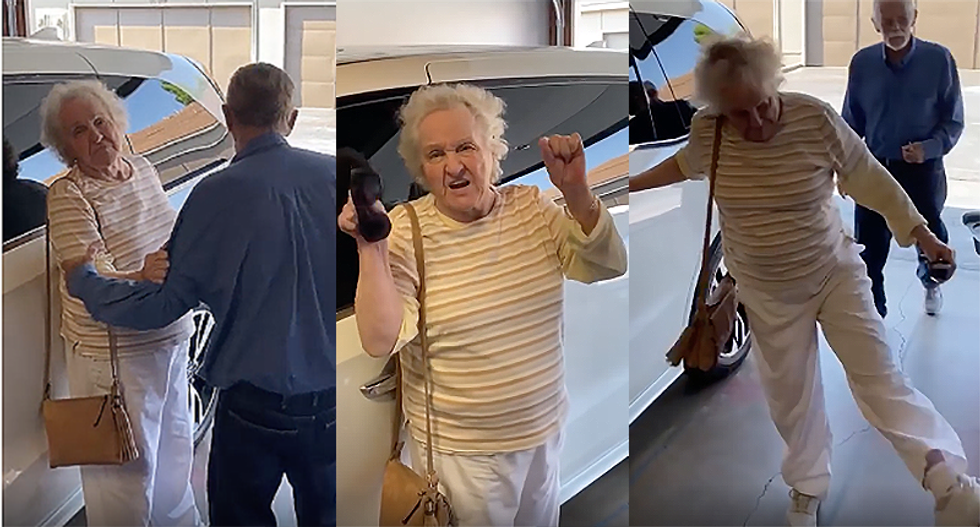 An Asian-American father captured a video of his elderly neighbor losing it after his children drew on the sidewalk with chalk.

The International Business Times posted the video Monday showed the elderly woman coming into his garage and yelling at him for his children's art.

Xiao Huang posted the video on Facebook with a lengthy explanation of what happened. Calling her a "Karen," Huang said that she walked into his house "uninvited" to shame him about his children's drawings looking "like sh*t."

"Tell your kids to stop or else I'm gonna....." the woman said, but Huang cut her off, asking repeatedly, "You're going to do what?"

"I don't think you live here because you have slanted eyes," she was heard saying.

"The entire neighborhood doesn't have a problem with it, except you. You've had a problem with me ever since I moved in here," he told the elderly people.

"I'm going to get a pail and a brush and tell your kids to come out here and clean it," she can be heard saying.

"Over my dead body! You touch my kids, you're going to see something coming," he warned her. She then came back into the garage and kicked over a table fan.

"We tell our kids to respect people's boundaries, we tell them to never color on walls, garages and anything that is not ours. I always, ALWAYS live by the motto love your neighbors as yourself...but she crossed the line," Huang wrote in his caption. "I can't tell you how upset I am. I pride myself in how I present myself. Jenine and I do the best we can to raise our kids right, teaching them right from wrong, respect others, doing the right thing even when people aren't looking. I am not going to let this woman and her husband's actions overshadow all the good that I see in my neighbors and this world."

He noted in his post that there are no mentions of children using chalk on the sidewalk in their community rules.

Who gets mad over chalk art?! This man was in his garage just minding his own business at his home in #California. This elderly woman walked into the garage of an Asian man’s home and yelled at him for all of the chalk on the concrete outside their home. He mentioned that no one else in the neighborhood has said or mentioned anything. During the whole ordeal, her husband is seen trying to pull her out and take her home. She proceeds to tell the man that he has slanted eyes. This old woman is wild!! When will this Karens stop? Comment your thoughts below! (The original video was posted and shared by a Chinese man on Facebook.)