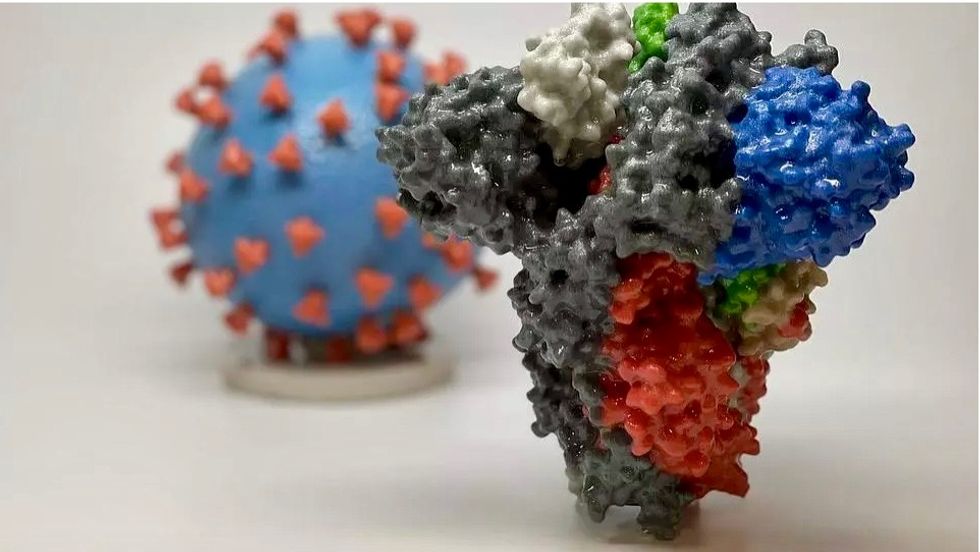 A 3D print of a spike protein of SARS-CoV-2, the virus that causes COVID-19, in front of a 3D print of a SARS-CoV-2 virus particle Handout National Institutes of Health/AFP/File

The US biotech firm Regeneron said Tuesday its antibody cocktail against the coronavirus reduced viral load and recovery time in non-hospitalized Covid-19 patients during an early-stage clinical trial.

"We are highly encouraged by the robust and consistent nature of these initial data," said George Yancopoulos, the company's president and chief scientific officer.

"We have begun discussing our findings with regulatory authorities while continuing our ongoing trial," he added.

"We have begun discussing our findings with regulatory authorities while continuing our ongoing trial," he added.

The results related to the first 275 patients recruited into Regeneron's Phase 1 trial. The patients were randomized to receive either a low-dose, high-dose or placebo of the drug, and they were also classed by whether their bodies had mounted their own antibody response or not.

The greatest treatment benefit was seen in patients who had not mounted their own effective immune response, which suggested the drug, called REGN-COV2, could act as a substitute in the absence of naturally occurring antibodies, according to Yancopoulos.

Regeneron said it would recruit 1,300 patients for the next stages of the outpatient trial. It is also concurrently running late-stage trials for hospitalized Covid-19 patients and for the drug's potential use as a prophylaxis.

Antibodies are infection-fighting proteins made by the immune system that can bind to particular structures on the surfaces of pathogens and prevent them from invading cells.

Vaccines work by teaching the body to make its own antibodies, while scientists are also testing ready-made antibodies from the blood of recovered patients, called convalescent plasma.

Researchers can also comb through the antibodies produced by recovered patients and select the most effective out of thousands, and then manufacture it at scale.

Regeneron uses a multi-antibody strategy to decrease the chances that the virus will mutate in order to evade the blocking action of a single antibody, an approach the company detailed in a recent study in Science.

Last year, a triple-antibody cocktail developed by Regeneron was shown to be effective against the Ebola virus.

Also on Tuesday, the biotech firm Moderna -- one of the frontrunners in the race to develop a Covid-19 vaccine -- reported results from the Phase 1 portion of its clinical trial that showed its drug was safe and generated a strong immune response among a group of 40 older adults.

Moderna's Phase 3 trial, the final phase before possible approval, is also underway and could report interim results by the end of the year.