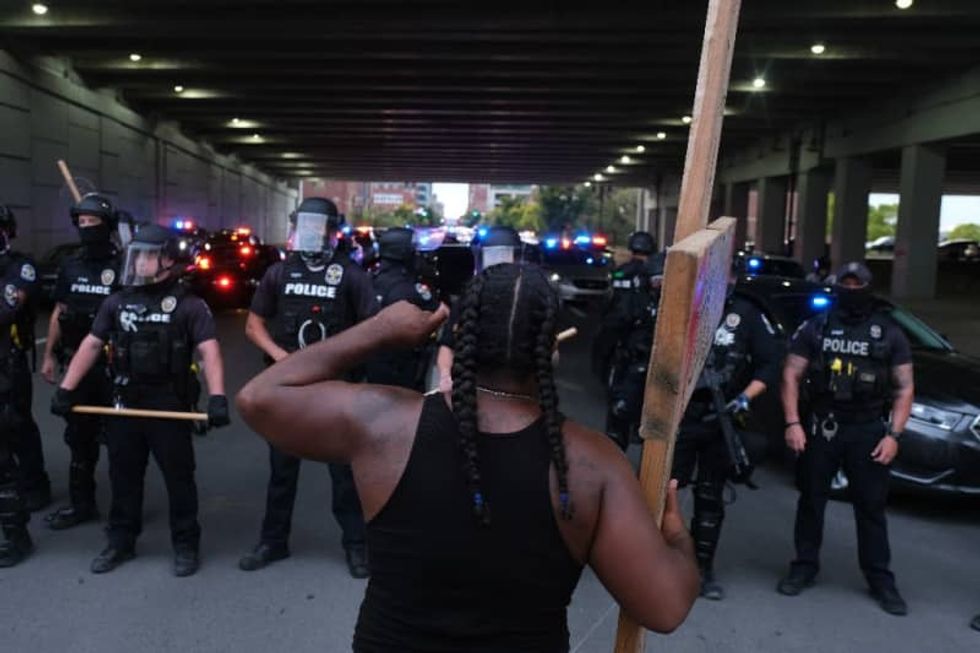 The family of Breonna Taylor on Friday demanded US authorities release grand jury transcripts to show why no police will face direct criminal charges over her death, which has galvanized police brutality protesters.

Taylor, a 26-year-old black emergency room technician, was shot dead in Louisville, the largest city in Kentucky, on March 13 after three plainclothes policemen executing a search warrant burst into her apartment in the middle of the night.

Her boyfriend exchanged fire with the officers, who he said he thought were intruders.

The family's lawyer Ben Crump led chants of "release the transcripts" at a press conference in Louisville, calling for them to be loud enough for Taylor to "hear it from heaven."

He demanded that Kentucky Attorney General Daniel Cameron demonstrate whether he presented "any evidence on Breonna Taylor's behalf," or if he had "made sure that her family never got their day in court."

"It's like they charged the police for missing" but did not charge them for "shooting bullets into black bodies," Crump said.

A grand jury is a panel of citizens empowered to screen accusations and decide if they should lead to criminal charges.

Their proceedings are secret, and involve only the prosecutor. Neither the defendant nor their lawyers are present.

Crump described Taylor's family as being "heartbroken, devastated and outraged and confused and bewildered" at the decision.

He questioned whether Taylor's boyfriend, or other witnesses including neighbors who have said they did not hear police identify themselves, were among those who testified -- and if not, then "what kind of sham grand jury proceeding was this."

The grand jury decision, coming after a summer of historic civil rights protests across the United States, sent a fresh wave of anger rippling from coast to coast.

In Louisville thousands have demonstrated for three nights running, defying a curfew.

At Jefferson Square, where the crowd converged, several groups offered to register people to vote.

"We're giving them easy access by bringing it to them like pizza," said Felicia Garr, 52, who was coordinating the action.

Garr said she understands the frustration of discouraged black citizens.

"If you say you're here for Breonna Taylor and not voting, you are not getting the message!" she harangued the crowd, speaking through her pink megaphone.

One new voter was Jamie Bethel, 20, who was a minor when President Donald Trump took office. As she filled out the paperwork with a pen she said that she's "sick of the cops thinking they can get away with anything."

Trump "is not doing anything about it," Bethel said.

The US president, who is hammering home a "law and order" message, has fanned fears about violence at the protests in recent months.

Some demos have devolved into clashes between demonstrators and heavily armed police or largely white, armed militias.

Two officers were shot and wounded at the Louisville protests late Wednesday, and more than 120 people were arrested.

The demonstrations Thursday, while tense, appeared largely peaceful, with dozens of protesters seeking refuge from authorities in a church, and police arresting about two dozen people.

Lawyers for Taylor's family called on media to stop "skewing" the protests, accusing journalists of focusing disproportionately on the violence.

Black residents of Louisville, home to the late boxing great and rights advocate Muhammad Ali, said they have long had to endure police abuses.

One black demonstrator, Marc Wilson, 49, was convinced that police in the United States were fundamentally "racist."

Wilson, who moved around in a wheelchair, told AFP that he carried weapons with him at all times. Since he did not trust police, citizens will have to protect themselves, he said.