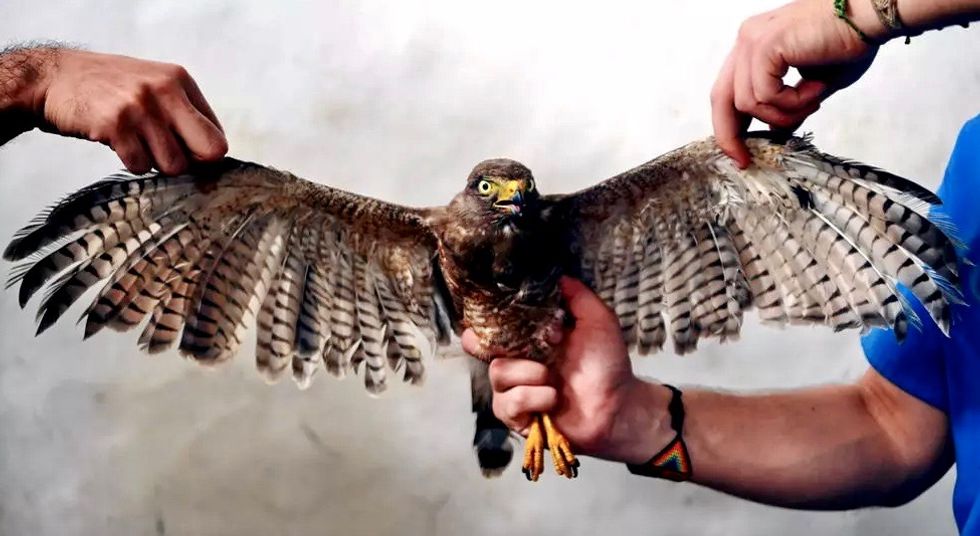 Veterinary surgeon Jose Coto's clinic at the El Salvadoran environment ministry has its hands full as it cares for a wide array of injured, neglected or abused wild animals in the Central American country.

But he was stunned when police recently brought him a large-beaked hawk that had its wing feathers hacked off.

It fell to the 30-year-old veterinary surgeon and his assistants to painstakingly graft on a new set of feathers to the wings of the brown-and-white animal in the hope it can fly again.

Clipping its wings -- the act of a man who wanted to keep the wild hawk as a pet -- "is the cruelest idea of what not to do to a bird," said an aghast Mauricio Sermeno, head of the Salvadoran Ecological Unit, an environmental NGO.

"Trying to turn wild birds into pets is the same as killing them, because they can no longer reproduce," said Sermeno.

"Birds need to live in the open air, it's their natural way of living."

Painstakingly, matching up identical feathers from another hawk that died months ago, Coto and his team were able to graft on a new set of wings to the 12-inch (30 centimeter) bird of prey in a two-hour operation.

The new feathers were carefully "inserted into the stump of the ones that were cut," the vet explained.

Most birds molt and grow new feathers every year, but the transplant will mean this hawk won't have to wait the six-months to two years it would need to grow its wings back, during which Coto says it would likely die.

To the delight of veterinary team, the bird was soon able to fly five meters (17 feet) across a room, without losing a feather. Coto says a release back into the wild is being set for next Friday.

Injured animals as diverse as boa constrictors and raccoons are sent to the clinic by members of the public or the country's environmental police.

"All species have a function in nature. If we start to attack them or keep them in captivity, they will no longer fulfill their specific function," Coto said.

The main objective of the environment ministry vets is "to send wild animals back to their natural habitat so they can continue to fulfill their role in the ecosystem," according to Coto.

The case of the hawk shorn of its wings is particularly cruel, said Semeno.

"It's important that these cases be made public so that people are aware of the consequences of keeping wild animals in captivity," he said.

The Roadside Hawk (Rupornis Magnirostris) is a common bird of prey found along highways all across the Americas, from northern Argentina to southern Texas.

Population confinement and the general hush brought to many cities by coronavirus lockdowns have brought wildlife closer to human populations, and the hawks are making new habitats "in unprecedented numbers" in parkland in and around San Salvador, said Sermeno.

The number of injured or sick animals has also increased significantly, as have the reports of animals held in captivity, according the Environment Ministry's Director of Wildlife, Marcelo Angulo.

For the first eight months of the year in El Salvador, 900 animals were rescued, compared to 700 over the same period last year, he said.