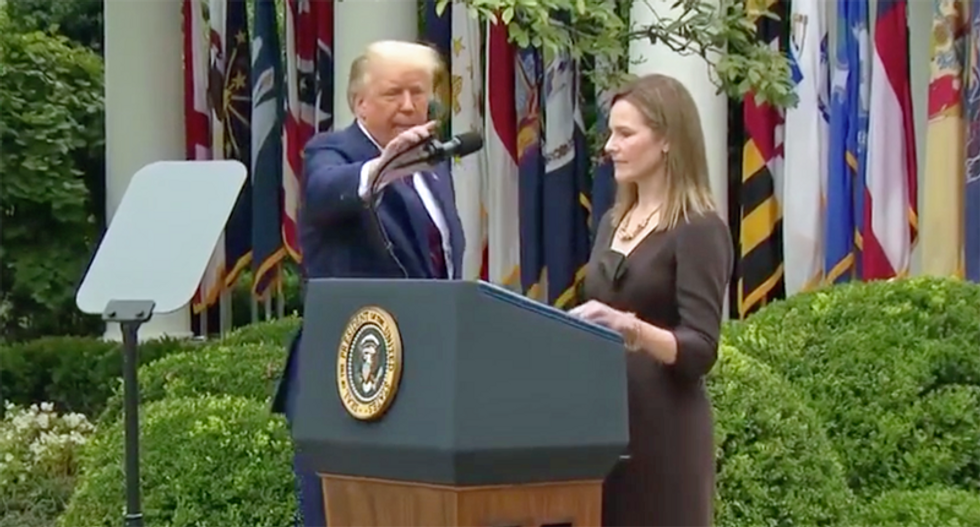 "A vote for Judge Amy Coney Barrett is a vote to eliminate health care for millions in the middle of a pandemic," Schumer wrote. "Democrats are fighting for Americans' health care."

Sen. Dianne Feinstein (D-CA), the ranking member on the Senate Judiciary Committee, ripped the nomination for coming so close to the election.

"No Supreme Court vacancy has been filled this close to a presidential election. The Senate shouldn't consider any nominee until the American people have spoken and the next president has been inaugurated," Feinstein wrote.

Sen. Richard Blumenthal (D-CT), who is the Senate's most experienced prosecutor, said, "I will refuse to treat this process as legitimate and will not meet with Judge Amy Coney Barrett."

Here's what other Senate Democrats were saying about the nomination:

Amy Coney Barrett’s nomination to the Supreme Court is the product of a corrupt, illegitimate process that undermin… https://t.co/k9R0ze4gOn
— Kirsten Gillibrand (@Kirsten Gillibrand)1601156526.0

I’ve said from the beginning that Senator McConnell should follow his own precedent from 2016: This vacancy should… https://t.co/SwwWCYzuKy
— Tim Kaine (@Tim Kaine)1601155442.0

Donald Trump's nominee is a direct threat to the Affordable Care Act, reproductive choice, and so many other libert… https://t.co/qva6MDe4pH
— Cory Booker (@Cory Booker)1601155371.0

We are barely 1 month away from Election Day. There is no honor or fairness in the way @senatemajldr and @POTUS ar… https://t.co/4JurYp74jB
— Senator Ben Cardin (@Senator Ben Cardin)1601159930.0

The Senate should not be considering a Supreme Court nomination before Inauguration Day. https://t.co/Ptc5O2Yf0K
— Mark Warner (@Mark Warner)1601157153.0

Trump made a bargain in 2016: support him and he would let right-wing, pro-corporate groups hand-pick their favorit… https://t.co/2kDpG8AOVw
— Elizabeth Warren (@Elizabeth Warren)1601155530.0

It doesn’t matter who the Supreme Court nominee is; it matters who’s behind this pick. And the answer is special in… https://t.co/4q1jEmxDXd
— Sheldon Whitehouse (@Sheldon Whitehouse)1601154724.0

Americans need Supreme Court Justices who will protect the rights of all Americans, and deliver equal justice for a… https://t.co/0JKYRo50ch
— Senator Tina Smith (@Senator Tina Smith)1601155862.0

Regardless of the nominee, I believe there aren’t different sets of rules for Democrats and Republicans, and we mus… https://t.co/m1zi37Hbkd
— Senator Jon Tester (@Senator Jon Tester)1601158708.0

Make no mistake: A vote for Judge Amy Coney Barrett is a vote to end the healthcare law in the middle of the COVID… https://t.co/S8W2yeW5dk
— Senate Democrats (@Senate Democrats)1601159824.0