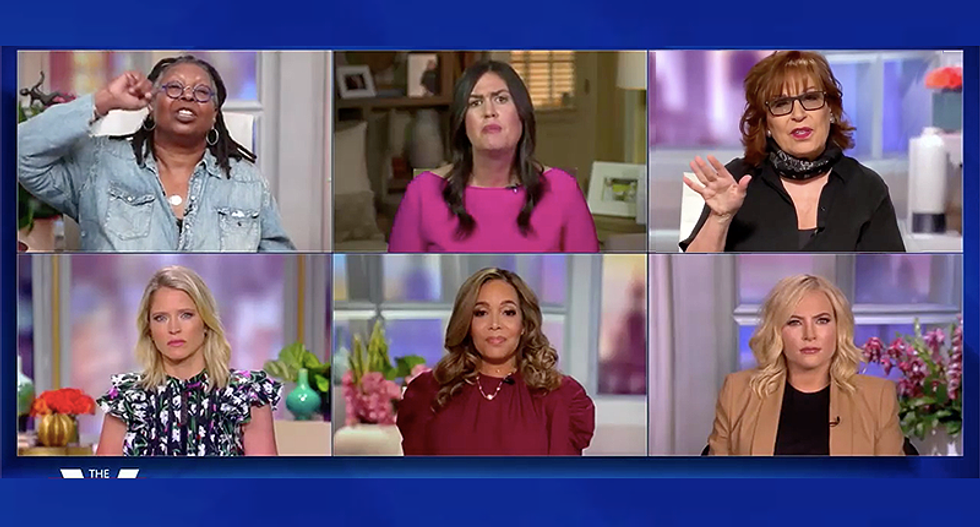 Sanders tried to promote the president as caring about Jacob Blake's family, but Trump never reached out to them, nor has he attempted to solve the problems with systemic racism in law enforcement. Instead, he denies it even exists.

Co-host Sunny Hostin hammered Sanders on why Trump refused to incorporate the Black family into his Wisconsin visit, which Sanders struggled to answer. She went on to attack the violence, but Hostin cut in again, noting that all of this is happening under Trump's watch. Sanders repeated Trump's dodge of blame, claiming that the cities are being run by Democrats and that's where these things are happening.

At one point Joy Behar had to tell Sanders to stop filibustering because "it's only an hour show." She asked more questions about Trump's treatment of the military, but Sanders used her token line about how much Trump loves the troops.

Sanders went on to claim police can't all be blamed for "bad apples," but then blamed all protesters for the "bad apples" that are violent.

McCain cut in again, saying that Sanders was also in the White House when Trump started going after the McCain family and did nothing to stop him.

"We all share a different opinion, the problem is, Sarah, you were serving in the White House when President Trump decided to not have the flags raised when my father passed which had very great outrage," said McCain. "You were there during a lot of instances. You know I have spoken with President Trump on the phone in the past about issues like this. I think he's aware that there has been serious damage done by the criticism not only by my family, like I said the Khans and Col. Vindman. The problem with the story is it seems like something he would do."

She went on to say she doesn't doubt that Sanders has seen Trump do something nice, the problem is that it hasn't been the experience of so many other people who don't work for Trump.

"For me and my brothers who serve we don't feel respected," she said. "We're a military family that doesn't feel respected by this president. Part of the problem is it's great unless you're a person who disagrees with the president and then your service becomes people who weren't captured. I understand you have to do a job because you're his supporter. At least concede that it has to be very uncomfortable to have this conversation with me right now."

Watch the fight in the video below: