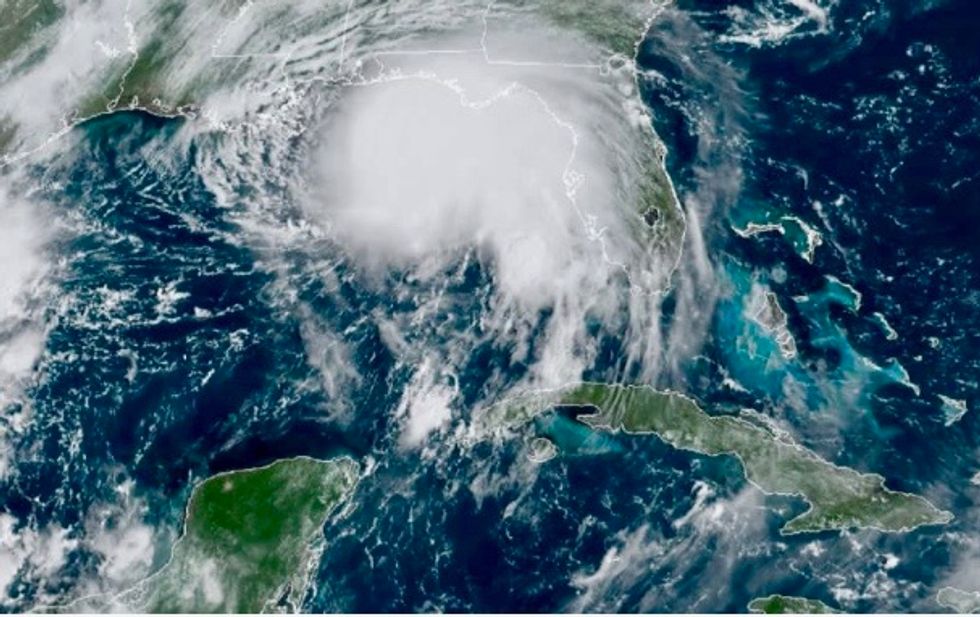 This RAMMB/NOAA satellite image shows Hurricane Sally off the Gulf of Mexico
Hurricane Sally was churning slowly towards the coast of the southern US states of Alabama, Louisiana and Mississippi on Monday as a Category 1 storm.

The National Hurricane Center said the storm in the Gulf of Mexico was packing maximum sustained winds of around 90 miles (150 kilometers) per hour.

At 1800 GMT, it was located 160 miles southeast of Biloxi, Mississippi, and heading in a west-northwesterly direction at seven mph.

It was expected to make landfall late Tuesday or early Wednesday.

Governor John Bel Edwards of Louisiana, which is still recovering from Hurricane Laura, which made landfall as a Category 4 storm, said Sally could impact the southeast part of the state and told residents to be prepared.

The governors of Alabama and Mississippi both declared a state of emergency ahead of the approaching storm.

"The storm surge projections continue to be worrisome with anywhere from five to eight feet (1.5 to 2.4 meters) of coastal surge," Reeves said.

"We are continuing to be very concerned about the amount of rainfall," he said, adding that some areas could be drenched in as much as 20 inches of rain.

Sally is one of five active tropical cyclones in the Atlantic Ocean.

The others are Hurricane Paulette, tropical storms Teddy and Vicky and tropical depression Rene.

According to meteorologists, the only other time there were five active tropical cyclones in the Atlantic at the same time was in September 1971.

Hurricane Paulette, a Category 2 storm, pounded the island of Bermuda on Monday with strong winds and heavy rains, according to the NHC.