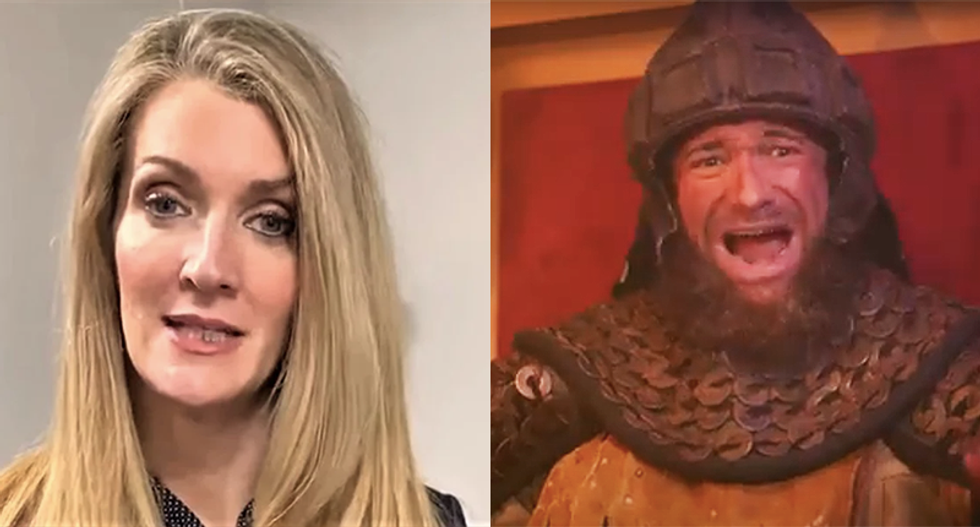 Sen. Kelly Loeffler's (R-GA) new campaign ad brags that she's "more conservative than Attila the Hun," with an actor grunting off a "list" of things he would do.

It appears neither Loeffler nor her staff thought to google who Attila the Hun was and why associating yourself with him could be a public relations disaster.

Among the things the History Channel remembers about Attila, was that he killed his own brother to ensure absolute power. He invaded Gaul in an attempt to score a wife. He also had a "legendary lust for gold."

"Again, this is the senator whose initial appointment last year was greeted with much punditry about how she'd appeal to moderate women in the Atlanta suburbs who were drifting away from the GOP and turning Georgia purple," noted Jacob Rubashkin, reporter and analyst for InsideElections.

"Now she's comparing herself favorably to Attila the Hun," he added.

Among the list of things Attila rattled off in the ad is "eliminate the liberal scribes." The derivation of the word "scribe" goes back to Judaism, as a person who transcribes law and traditions. It was referenced in the Old Testament. It's unclear if Loeffler is attacking the Jewish liberal media, Jewish lawyers, liberal Jews or liberal writers in general.

"Collins and Loeffler are both running so far to the right, there's a whole swath of potential voters in the middle up for grabs," said Rubashkin. "If Stacey Abrams had run and cleared the Democratic field... On the flip side, if [Raphael] Warnock manages to squeeze past [Doug] Collins for the second spot in the runoff, as most Democratic strategists believe he will, then this race ends up at a *very* interesting January runoff, one that Democrats could have a real shot at."

It underscores what a missed opportunity the special election could be for Democrats. Collins and Loeffler are both… https://t.co/V178r6oTpq
— Jacob Rubashkin (@Jacob Rubashkin)1600711382.0

On the flip side, if Warnock manages to squeeze past Collins for the second spot in the runoff, as most Democratic… https://t.co/zN40bb9DU5
— Jacob Rubashkin (@Jacob Rubashkin)1600711501.0

Rep. Collins responded to the ad in a statement saying: “Kelly thinks conservatives are grunting, filthy, mass-murdering open borders atheist polygamists. She lives in a seriously warped palace with an odd view of the peasants.”

See the shocking ad below: