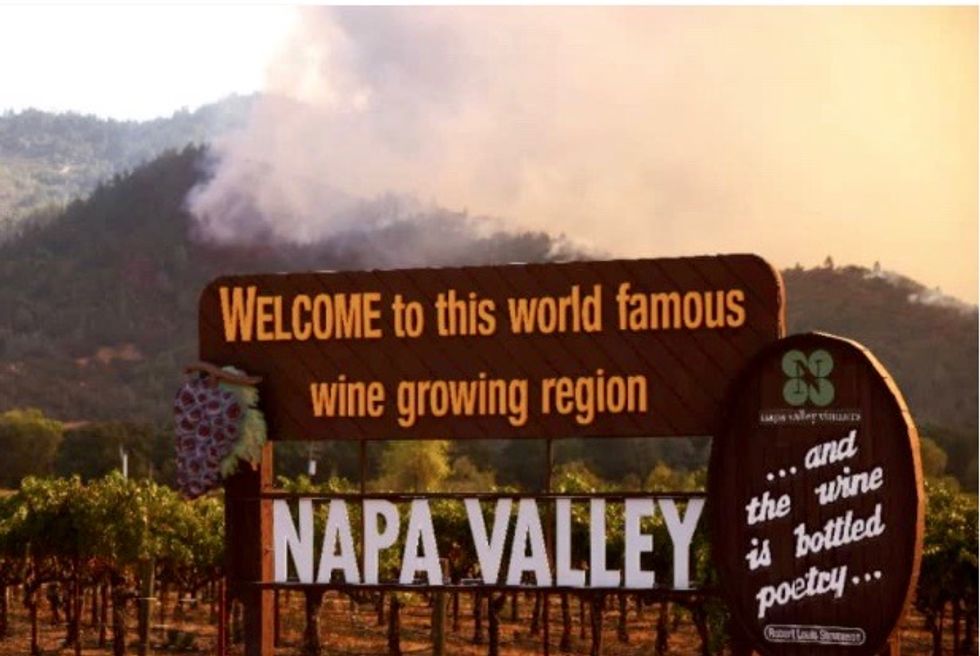 Wildfire rips through the world-famous Napa Valley, with smoke rising from the fast-moving Glass Fire on hills on September 27, 2020 in Calistoga, California (AFP)

Tens of thousands of Californians fled their homes in the Napa and Sonoma wine regions in the face of wildfires, emergency officials said, as a new blaze in the north of the state killed three people.

Under an orange sky and a sweltering heatwave, some of Napa Valley's best-known vineyards were consumed by an out-of-control blaze that raced through more than 35,000 acres (14,000 hectares), according to state fire agency Cal Fire.

Celebrated wineries such as Chateau Boswell and part of Castello di Amorosa went up in smoke, while there was a "significant loss" of buildings on the fringes of Santa Rosa -- neighboring Sonoma County's largest town -- said fire chief Tony Gossner.

The causes of the fires are still being investigated.

Calistoga, a picturesque community at the top of the Napa Valley known for hot springs and as a launchpad for wine tours, has largely been evacuated.

"We could see flames shooting up all night long," Thompson told AFP. "The only thing we have left to do is put the cats in the car."

The inferno is threatening communities in Napa and neighboring Sonoma, still reeling from devastating wildfires in 2017 when 44 people died and thousands of buildings were razed.

California governor Gavin Newsom -- who blames the severity of recent blazes on climate change -- said winds were expected to stabilize overnight, which should help firefighters.

The new conflagrations come during a record season, with five of the state's six biggest wildfires in history currently burning.

The Zogg Fire, which has already torn through more than 30,000 acres, is expected to merge with the 900,000-acre August Complex fire.

Kale Casey, a spokesman for firefighter efforts at the blaze, said winds had already been "pulling" flames away from contained areas before the latest conditions.

"And then you have a day like yesterday where all hell breaks loose," he said.

More than 2,000 firefighters battled Monday to bring the flames under control in a region that "has been hit over and over and over again," said Governor Newsom.

Susie Fielder fled her St Helena home in Napa County before dawn, grabbing a photo of her grandparents off the wall and a small, bag of essentials after a warning alarm sounded in her neighborhood.

"This morning I was thinking what do you do if you lose everything?" Fielder told AFP.

Returning from a refuge in the city of Napa shortly before noon, she found her home ash-coated and without electricity, but otherwise unscathed.

Nearby flame-ravaged Spring Mountain was barely visible through the smoke as Fielder got to work cleaning and moving food into a freezer powered by a generator.

She doesn't plan to unpack her "go bag" of essentials.

"I'm going to stay until somebody comes and knocks on my door and tells me I have to leave," Fielder said.

Newsom warned that California is only "now moving into the peak of the wildfire season," with Santa Ana winds sweeping south toward Los Angeles, where another major heatwave is expected.

Evacuations have been complicated by the coronavirus, which has hit the Golden State hard. Hotels and university accommodation are being used as alternatives to mass shelters.