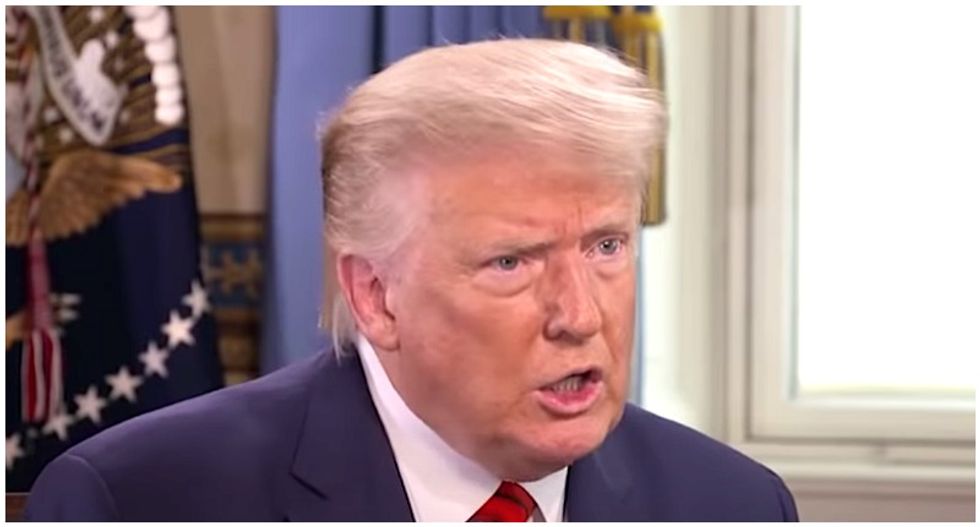 September has featured one scandal after another stemming from Donald Trump's belief that the best way to handle the coronavirus pandemic is to let a bunch of people get sick and die, and then deny that it's happening. First, journalist Bob Woodward started to releasing recordings in which Trump said he "wanted to always play it down" and admitted he had deliberately lied to the public about how serious this virus really is. Then, in a town hall for ABC News, Trump confessed that his real strategy was to let the virus run loose to create herd immunity — or rather "herd mentality" which would be "herd developed," to quote the president accurately — even though that would literally kill millions of Americans. Then the New York Times published a new exposé revealing that Trump officials had overruled medical researchers at the Centers for Disease Control and Prevention, forcing the agency to publish misleading and dangerous information designed to discourage people who have been exposed to the virus from being tested.

None of this, it's critical to underline, is good for Trump's re-election campaign. Polling shows that only 35% of Americans approve of Trump's handling of the pandemic, which is the same percentage of Americans who would probably say they'd still love Trump if he nuked their hometowns. Polls also show that because of Trump's malice and incompetence, 69% of Americans have little to no confidence in the safety or efficacy of a vaccine that he may announce. Only 9% of Americans say they have a great deal of confidence in Trump. Even his own supporters know he's a liar and a fraud: They've entrusted him with the nuclear codes, but don't trust him with a vaccine.

Yet despite all this, Trump keeps on keeping on with his "let them die and lie about it" strategy.

At a rally in Ohio Monday night, Trump leaned heavily into the "play it down" strategy, going on a rant about how young people "have a strong immune system" and the virus primarily "affects elderly people, elderly people with heart problems and other problems."

"But it affects virtually nobody. It's an amazing thing," he continued, even though the "nobodies" he's talking about — older people, people with health problems — are more likely to be Republican voters than Democrats, who skew younger. Trump himself is 74 years old, though he has probably deluded himself with all his "good genes" talk into believing he's not in the high-risk category.

Trump made these "nobody" comments as the death toll from the virus approached 200,000 Americans — a benchmark we passed on Tuesday morning — and the number of people infected surpassed 6.8 million. But the circle of "nobodies" is much larger than that, since basically everyone in the country is affected by this pandemic. Either someone they love has gotten the virus or lockdowns and the severe economic downturn have negatively impacted their lives.

Trump's efforts to weaponize the CDC haven't slowed down either. Last Friday, a new guidance slipped onto the website that emphasized that coronavirus transmission is airborne and that indoor, crowded spaces such as fitness classes and choir practice are especially dangerous. On Monday, however, the guidance was removed and the CDC said it had been "posted in error."

That is, of course, absolutely ridiculous. As Ben Guarino, Chris Mooney and Tim Elfrink at the Washington Post report, "Evidence that the virus floats in the air has mounted for months, with an increasingly loud chorus of aerosol biologists pointing to superspreading events in choirs, buses, bars and other poorly ventilated spaces."

It's possible, of course, that this is all a matter of bureaucratic mismanagement and that any moment now the CDC will post a guidance that reflects the scientific evidence that indoor airborne transmission is a serious threat. But it's reasonable to be suspicious, especially as the guidance that was yanked down conflicts with Trump's repeated insistence on returning Americans to a lifestyle that involves a great deal of close contact in indoor spaces such as offices, restaurants, churches, schools and — perhaps most importantly, in Trump's eyes — political rallies.

Considering that Trump's pandemic mismanagement has destroyed any hope of a return to normal life anytime soon, all eyes have turned toward the possibility of a vaccine as the thing that will save us from this pandemic. While there's reason to hope that a safe and effective vaccine will be ready for distribution in the coming months, there's also reason to be worried that Trump is going to screw the entire thing up.

Trump just keeps lying and lying about a vaccine, insisting that one is not only coming on a much quicker timeline than actual health experts believe, but even setting concrete deadlines, suggesting (of course) that a vaccine may be available before Election Day.

It's tempting to shrug off such antics, but as with all things, Trump's relentless lying and meddling are only making a bad situation worse. The more this pathological liar talks about a miracle vaccine that's right around the corner, the more the public appears to be skeptical about it, on the sound grounds that it's bad news to trust a blowhard moron who posited that bleach injections might be a useful treatment for COVID-19.

People probably shouldn't be worried that Trump will try to force a dummy vaccine onto the market. He's way too lazy to pull that off. What's more likely is that he'll find some thin pretext to host some reality TV-style October-surprise announcement of a vaccine that doesn't actually exist yet, holding up an empty syringe and falsely claiming — as he has done for months — that the pandemic is finally over.

The real problem isn't so much a fake vaccine as the possibility that Trump will screw up the distribution of a real one, whenever such a thing exists. Past is predictor, after all, and in the past, meddling by Trump and his administration — especially his son-in-law, Jared Kushner — has actively blocked efforts by government officials or medical experts to control the pandemic. Kushner shut down strategies to distribute protective equipment to people in need, embracing instead a "market" strategy that drove up prices and increased shortages. Trump himself has waged a war against the widespread testing necessary to slow down viral spread.

Trump's instincts will always lead him to lie and cheat, and his distrust of experts makes it impossible for him to get out of the way and let competent people do their jobs. Witness how he took over the coronavirus task force briefings, interfering with the ability of public health officials to share valuable information so that he could indulge his fantasy of being the star of the show and the preeminent authority on every topic.

If Trump wins re-election (by fair means or foul), his compulsive need to interfere with everything and his paranoia about the "deep state" that's out to get him will surely affect vaccine distribution, just as he and Kushner messed with distribution networks for protective equipment and testing.

Also, the more Trump runs his mouth about a vaccine, the more people will distrust that a vaccine is trustworthy and safe, since everyone — including his own supporters — knows he will say anything if he thinks it benefits him. If people don't trust a vaccine, they won't get it, no matter how many experts vouch for its safety.

The grim reality is that it won't be enough to have a safe and effective vaccine. (Bearing in mind that we don't quite know what "effective" will mean: Will it be more like the measles vaccine, which protects most people for their entire lives, or like the flu vaccine, which offers partial protection for a single season?) To bring an end to the pandemic and a return to something like normal life, the vaccine must be distributed widely and efficiently, and most people need to trust it enough to take it. With Trump in charge, there's a good chance that all of that will go sideways. The only way to be certain that the coronavirus pandemic is brought to an end is for a real president to be in charge when a real vaccine is finally available.