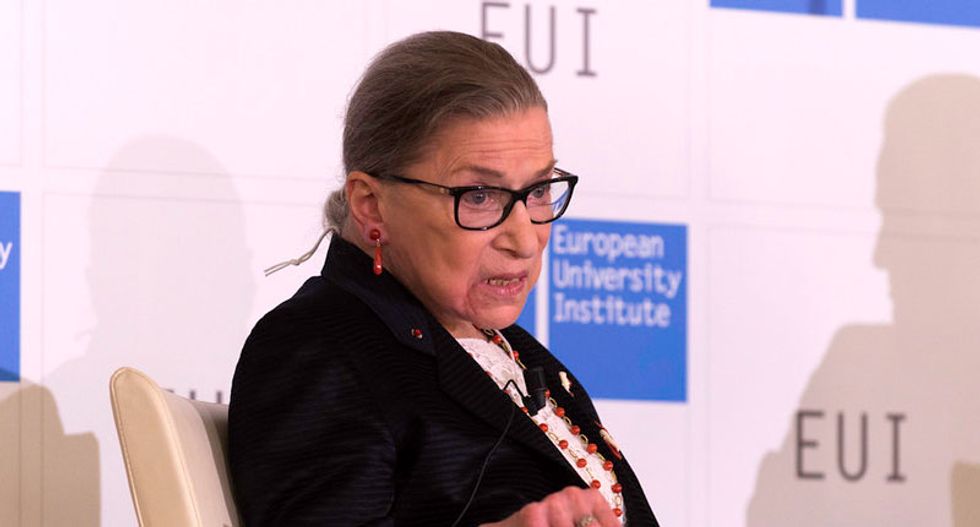 On Friday evening, just before 7:30 p.m., the U.S. Supreme Court announced that Justice Ruth Bader Ginsburg, a pioneer in using the law to advance gender equity, had died from complications due to metastatic pancreatic cancer just six weeks ahead of the presidential election.

The death of Ginsburg, who had battled various forms of cancer over the years, was not altogether surprising.

Neither was Washington’s response.

Less than 24 hours later, the president was already discussing potential replacements, telling reporters that he expected to announce his choice within the week and it would “most likely” be a woman. Shortly after, in front of a cheering crowd in North Carolina, Trump confirmed that it would indeed be a “very brilliant, very talented woman.”

Republican senators sprang into statement mode. “Given the proximity of the presidential election … I do not believe that the Senate should vote on the nominee prior to the election,” Sen. Susan Collins of Maine, who is in a competitive race to hold her seat, said Saturday afternoon. On Sunday, Alaska Sen. Lisa Murkowski, who is not up for reelection this year, followed suit: “For weeks, I have stated that I would not support taking up a potential Supreme Court vacancy this close to the election. Sadly, what was then a hypothetical is now our reality, but my position has not changed.” Both are following McConnell’s own precedent, set when he blocked a 2016 vote on Merrick Garland, President Barack Obama’s pick to replace conservative Justice Antonin Scalia, who died the February before the presidential election.

McConnell, who has led his party in the Senate since 2007, has executed a decades-long conservative quest to remake the judiciary, first by blocking Obama’s nominees so effectively that when Trump was elected, he had more than 100 federal court vacancies to fill and a Supreme Court seat.

Senate Democrats, frustrated by McConnell’s success in derailing Obama’s nominees even when Republicans were in the minority, had in 2013 eliminated the 60-vote threshold previously needed to confirm most judicial nominees in the 100-seat chamber. McConnell then extended that to the Supreme Court during the 2017 confirmation of Justice Neil Gorsuch. The next year, Trump nominee Brett Kavanaugh was confirmed, as were more than 200 of the president’s lower-court picks. McConnell’s legacy will be an enduring conservative stamp on the courts.

The partisan rancor over Trump’s court picks now extends to a third Supreme Court nomination process. Republicans hold a slim 53-to-47 Senate majority, and Democrats will need four of them to prevent McConnell from confirming a nominee. A fight to slow or delay the process is expected, with Democratic senators already speaking out. As hundreds gathered at the Supreme Court to pay Ginsburg tribute at a vigil-cum-political rally on Saturday night, there were cheers among the tears when Democratic Sen. Elizabeth Warren said she would not allow McConnell to “ram through” a nominee before the election.

Ginsburg herself had lamented the political acrimony spilling over to the Supreme Court, a chamber that typically considers itself above the fray. In 2018, she called Kavanaugh’s confirmation hearings a “highly partisan show,” even before the process was rocked by allegations he sexually assaulted a classmate while in high school. She described her own 96-to-3 confirmation vote in 1993 as “truly bipartisan.” Gorsuch, by contrast, was confirmed by a 54-to-45 vote with the support of only three Democrats. “The way it was, was right. The way it is, is wrong,” she said during a 2018 event at the George Washington University Law School.

Ginsburg’s confirmation process, once nominated and before the Senate, may have appeared smoothly bipartisan — for Sen. Joe Biden, then head of the Judiciary Committee, it was also a chance to redeem himself with women after his questioning of Anita Hill two years prior — but the nearly three months leading up to her nomination were not.

Then President Bill Clinton was struggling to deliver on his promise to assemble an administration that “looked like America” during the 1990s “culture wars” over sex, gender and religion. Earlier that year, Clinton’s first two picks for attorney general, Zoë Baird and Kimba Wood, were derailed after media reports that they had both employed undocumented workers to care for their children. (Janet Reno was subsequently confirmed as the first woman to the post.)

When Clinton turned to fill a Supreme Court vacancy, the opposition to Ginsburg came from what today might seem a surprising source: women who supported abortion access. They were skeptical of Ginsburg’s opinions on Roe v. Wade, the 1973 decision that legalized the procedure nationwide. Ginsburg thought that the legal framework underpinning the high court’s decision in the case may be “unstable.” In one law review article, she had called it “heavy-handed judicial intervention.” Ginsburg, who supported abortion access, thought a stronger precedent would have been set in a case citing the 14th Amendment’s equal protection clause, which she had used throughout her career to advance gender equity. “The women are against her,” Clinton told then Sen. Patrick Moynihan, a Democrat helping with the search.

Liberal women’s groups, Harvard historian Jill Lepore recounted in a 2018 story for the New Yorker, dropped their opposition to Ginsburg’s nomination once it was thought that an adviser was steering Clinton to instead choose a man.

“There were some people who thought she was, it’s funny now, that she was too conservative. That’s because anything that is political tends to be two dimensional, almost cartoonish in its demand for labeling. And she was not a woman to be labeled,” Clinton told CBS “Face the Nation” on Sunday.

In the hours after her death, it became just how apparent public perception has come full circle, with many women on both sides of the political aisle, including Senate candidates, holding up Ginsburg as the last bulwark protecting the 1973 abortion access ruling.

Trudy Caviness, a 76-year-old county Republican Party chair in Iowa — where Republican Sen. Joni Ernst, a member of the Judiciary Committee, is trailing Democratic challenger Theresa Greenfield — said she hoped a nominee would be quickly confirmed. The future of abortion access could be determined by a more conservative bench, she said. Meanwhile, in Maine, where Collins is likewise trailing her Democratic challenger, Bates College student Olivia Eaton said that her friends were already discussing the potential impact as well. “I walked into my dorm room last night and my roommate said: ‘Are we going to lose reproductive care?’ It’s scary, I couldn’t answer,” she said.

With McConnell’s condensed timeline to confirm a justice before the election, or possibly in the lame-duck period between the election and the swearing in of the next Congress, the Supreme Court has assumed center stage in the 35 Senate races in November.

Roughly a dozen of those are competitive, and liberal voters sprang into action over the weekend to wage a public pressure campaign intended to peel off two more Republicans by funding their Democratic opponents. A record-crushing 1.5 million contributions totaling $91.4 million were made between the announcement of Ginsburg’s death and midnight on Saturday, with a focus on retaking the Senate majority, according to the Democratic fundraising platform ActBlue.

“I appeal to those few Senate Republicans, the handful who really will decide what happens: Please follow your conscience. Don’t vote to confirm anyone nominated under the circumstances President Trump and Senator McConnell have created, don’t go there, uphold your constitutional duty,” Biden said on Sunday.

Other elected officials signaled a more strong-armed approach than a heartfelt appeal. Sen. Richard Blumenthal, a Democrat on the Judiciary Committee, wrote: “If Republicans recklessly & reprehensibly force a SCOTUS vote before the election, nothing is off the table.” When asked on ABC’s “This Week” whether impeachment would be among the options that House Speaker Nancy Pelosi would consider, she said: “We have options, we have arrows in our quiver that I am not about to discuss right now,” except to say that she is prepared to use all of them.

Ginsburg knew her vacancy would set off a partisan tug-of-war. She had already said earlier this year she would not retire in a move to deny Trump and McConnell the chance to replace her. It was on her mind even in her final days, when Ginsburg told her granddaughter, “My most fervent wish is that I will not be replaced until a new president is installed.”

The majority of Americans, including half of Republicans, are in agreement, telling Reuters/Ipsos pollsters that they believe the vacancy should be filled by the winner of the November 3 election.

But Ginsburg also cared about how battles are fought. In 2015, at a Radcliffe Institute for Advanced Study at Harvard University event honoring her career, Ginsburg delivered this advice to today’s women: “Fight for the things that you care about, but do it in a way that will lead others to join you.”

Several years later, at the 2018 event where Ginsburg talked about Kavanaugh’s overtly partisan confirmation process, she said, “I wish I could wave a magic wand and have it go back to the way it was.” With confirmation hearings, potentially twinned with impeachment proceedings playing on the opposite side of the Capitol dome, in the weeks before an election, there may be no going back.

Barbara Rodriguez contributed to this report.