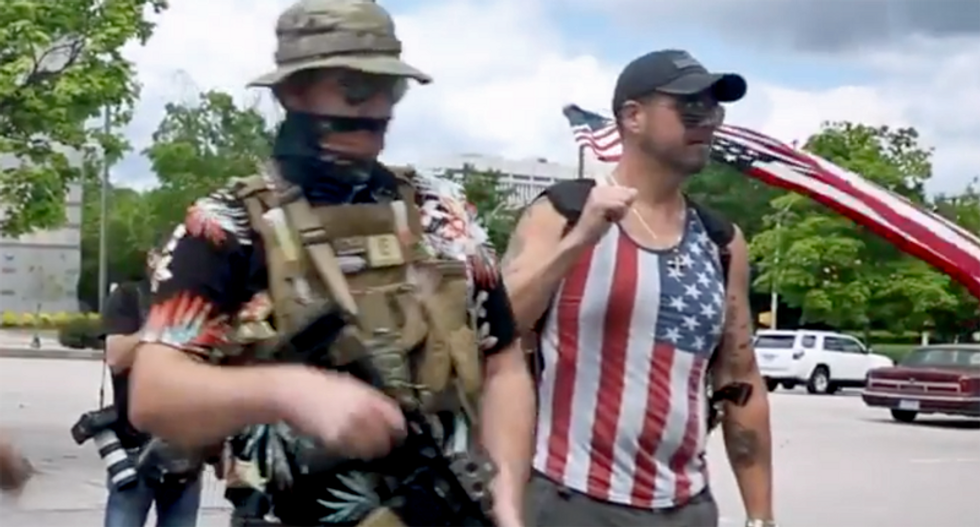 A new draft report from the U.S. Department of Homeland Security warns that white supremacists are the “most persistent and lethal” threat in the United States, according to a new CNN report by Geneva Sands.

It stands in sharp contrast to the notion of terroristic threats typically portrayed by conservatives, which focuses on the threat from Muslim attackers from other countries and, more recently "Antifa" and leftist groups. The DHS report warns that although foreign terrorist groups will continue to call for attacks on the U.S., those groups “probably will remain constrained in their ability to direct such plots over the next year.” But it predicts that the U.S. will face an “elevated threat environment at least through” early 2021 because of white supremacists.

Sands notes that DHS has had three different drafts of that report. According to Sands, the language in the drafts varies. But all three versions cite white supremacists as the greatest terrorist threat in the U.S.

Journalist Abigail Tracy, in Vanity Fair, reports that some former DHS officials believe that Trump is seriously downplaying the threat that white supremacists and far-right militia groups pose — or is even encouraging them. One former DHS official who is especially critical of Trump is John Cohen, former deputy undersecretary for intelligence and analysis at the agency.

Trump has praised Kyle Rittenhouse, the 17-year-old militia member who is accused of shooting three people — two of them fatally — at an anti-racism protest in Kenosha, Wisconsin. And according to Cohen, praising Rittenhouse is the last thing Trump should be doing.

“He is literally throwing gasoline on a fully raging fire,” Cohen told Vanity Fair. “You’re going to see potentially armed extremists from the other side of the political spectrum travel to those same cities to protect the protesters. Then you run the very real risk of a full-blown firefight breaking out between these different armed camps. Rittenhouse is a classic illustration of the concern.”

Miles Taylor, another former DHS official, also believes that Trump’s administration has downplayed the threat posed by white supremacist groups. Taylor told Vanity Fair, “There was a mindset in this administration from Day One that the threat wasn’t real — a deliberate burying of the head in the sand. I didn’t ever see that change within the White House, even as attacks started to happen.”

The Trump White House, Tracy notes, has been uncomfortable with the term “domestic terrorism” — and Taylor blames Trump.

“I’d say most of this lays at the president’s feet because ultimately, people are following the tone that he sets and the vision that he lays out,” Taylor told Vanity Fair. “In this case, it’s very clear to someone who would serve the president that he would hold views sympathetic to conspiracy-theory-wielding, semi-violent groups because they tend to like him…. People knew that talking about these issues too much was going to get them in trouble. And so, it had a chilling effect on the subject, whether or not the president directly ordered them to stand down.”

Elizabeth Neumann, a conservative Republican who served as assistant secretary for threat prevention and security policy at DHS and is now supporting Democratic nominee Joe Biden in this year’s presidential race, has stressed that the greatest threat of violence in the U.S. isn’t coming from Antifa — as Trump claims — but from far-right groups like the Boogaloo movement and QAnon. Neumann told Vanity Fair that Trump is “more than willing to talk about domestic terrorism in the context of Antifa. He clearly has a hard time admitting when he’s made a mistake.”

Neumann told Vanity Fair: “What we’re seeing now is more coordination among the white supremacist groups. They’re extremely sophisticated…. an enemy that is sophisticated enough to know how to operate without getting themselves caught. We might be aware of them, but we can’t do anything about their activities. The bigger concern is when some of these folks get together and they decide: this is it, this is the time to start that civil war, that race war — and they plan something big.”

The Jan. 6 committee has received about two years' worth of text messages sent and received by conspiracy theorist Alex Jones.

The data was handed over to the House select committee by attorney Mark Bankston, who represented two Sandy Hook parents who won nearly $50 million in penalties in their defamation suit against Jones and received the contents of the phone after the right-wing broadcaster's lawyers mistakenly sent them, reported CNN.

James on Friday notified State Supreme Court Judge Arthur Engoron, who held Cushman & Wakefield in contempt last month, that it had "received Cushman’s production, which amounts to about 35,867 documents since entry of this court’s contempt order." James also asked Engoron to "dissolve the contempt order and hold any contempt purged, without any fines due or owing."