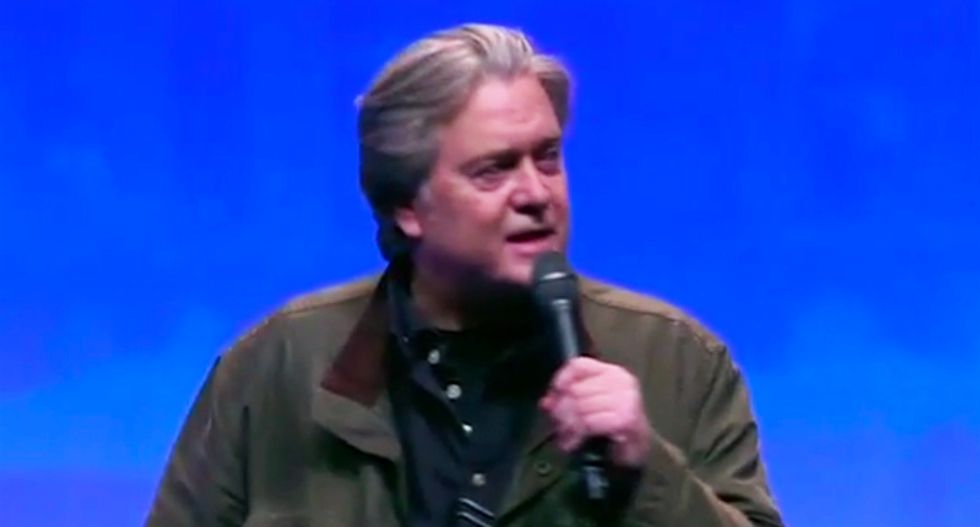 A 2008 case involving a loan shark and longtime business partner of Steve Bannon's, Andrew Badolato, may impact the fraud case against the former White House adviser. Bannon and Badolato worked together on a penny stock deal as well as political "documentaries."

The ironic twist was explored by Bloomberg News Tuesday, describing the efforts Badolato made to help the FBI record calls in a case involving organized crime. Badolato helped with another case in which he gave information that helped send an associate to prison for securities fraud.

A 2018 profile by the Sarasota Herald-Tribune revealed that Badolato taped his phone conversations with Bannon and other far-right leaders.

"Now the Sarasota, Florida, businessman is at the center of a third criminal case -- this time as a defendant," reported Bloomberg. "Federal prosecutors have accused him of conspiring with Bannon and two others to siphon hundreds of thousands of dollars from a campaign to raise funds for a border wall between the U.S. and Mexico."

Badolato pleaded not guilty in court Monday before being released on bail, while "disabled military veteran Brian Kolfage, who founded the campaign, Colorado businessman Timothy Shea and Bannon have also denied wrongdoing."

Bloomberg News cited former prosecutors that Badolato’s work with federal investigators increase the chances that he would turn on Bannon.

“The two of them knowing each other well is an important piece for a cooperator,” said former federal prosecutor Harry Sandick. “You want someone who can say, ‘I’ve known this person for years, and this is what we did together.’”

Badolato would be looking for leniency if he agrees to a deal with prosecutors.

Bannon was arrested for his GoFundMe enterprise "We Build the Wall," which sought to crowd-fund the building of the U.S./Mexico border wall. They only were able to build a small portion of the wall that is now on the brink of collapse.