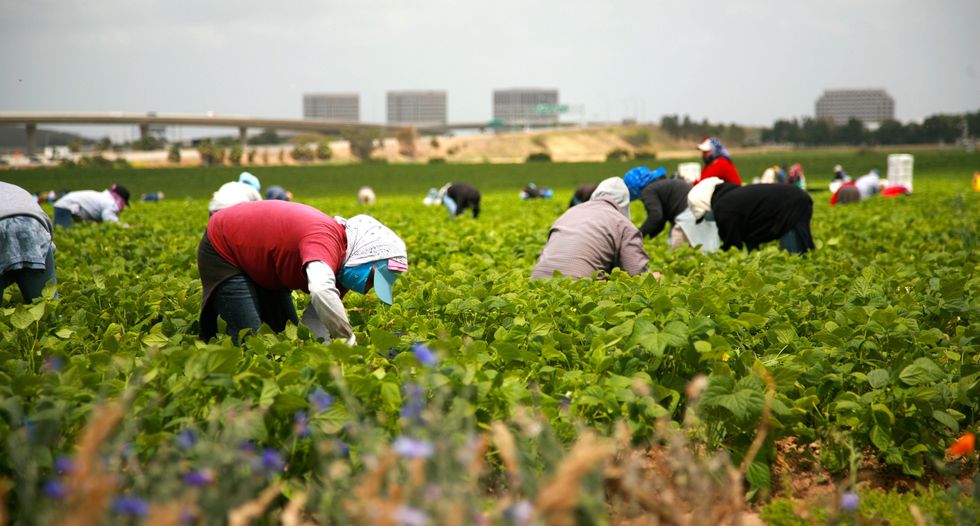 "For the workers, their hands were forced by a combination of circumstances as toxic as the ash that falls over the region's famous vineyards."

This Labor Day, immigrant and worker's rights advocates are sounding the alarm in response to reports of migrant grape pickers, many of whom are undocumented, being forced to work in fire evacuation zones by California growers in a situation critics say demonstrates how some of those deemed "essential" at the outset of the coronavirus pandemic have been rendered "disposable" in the face of a record-setting heat wave and extremely dangerous conditions.

"What's needed more than anything is an economic safety net in times of disaster so that people don't have to accept perilous work and changes to immigration laws, so they don't have to fear offers of help."

While the threat of flames and smoke was strong enough in Sonoma County to provoke the relocation of area residents, "the county agriculture commissioner invited workers to continue laboring in the fields, doling out evacuation-area access passes to dozens of agricultural producers," Alleen Brown reported for The Intercept.

"Workers were in no position to decline an offer for work," explained Brown, owing to "a combination of circumstances as toxic as the ash that falls over the region's famous vineyards."

One key factor underlying growers' willingness to sacrifice the health of grape pickers, explained Brown, is the profit-driven commitment to sustain the wine industry even in times of crisis. She wrote:

Over four years of massive wildfires, the wine region's agricultural commissioners worked closely with the Sonoma County Farm Bureau and Sonoma County Winegrowers to repeatedly grant permission to growers to harvest in wildfire-evacuation zones. Smoke from wildfires can damage the delicate flavor of the region's world-famous wines. The threat of deep financial losses creates a pressing incentive to harvest as quickly as possible, even when fire and smoke risk damage to lungs—and especially during a year when yields are expected to be lower than usual and the pandemic cut down restaurant sales.

Members of Movimiento Cultural de la Unión Indígena, a local Indigenous workers’ group, worry that the effects of wildfire smoke on their lungs will increase their susceptibility to Covid-19, Brown reported, but growers are keenly aware of the material desperation experienced by migrant farmworkers suffering from a lack of economic support and fearful of deportation.

On social media, United Farm Workers president Teresa Romero explained that many farm workers are excluded from some labor laws and ineligible for "basic supports most Americans receive." She said that "President Trump has made all of this worse, terrorizing our rural communities by saying the people who feed us are somehow criminals."

They’re excluded from many labor laws. Many farm workers are not eligible for basic supports most Americans receive… https://t.co/jI2YAP1L61
— Teresa Romero (@Teresa Romero) 1599494398.0

Immigration rights advocate José Alonso Muñoz juxtaposed the significant work being done by undocumented farm workers "keeping us fed during this pandemic" and the manner in which the same workers are being "treated as disposable, with reckless abandon."

This Labor Day I’m thinking about the farmworkers in places like California who have been keeping us fed during thi… https://t.co/edfnOOoGbB
— José Alonso Muñoz (@José Alonso Muñoz) 1599484037.0

While California is the only state in the U.S. to have passed labor rules around wildfire smoke and extreme heat, critics told Brown that the existing regulations are inadequate.

Yet, despite the extreme risks, many undocumented immigrants are compelled to work in dangerous conditions due to a lack of public support beyond their meager wages. The shortage of resources is especially acute for non-Spanish-speaking Indigenous Latin American workers for whom linguistic barriers present an additional challenge. On top of that, the economic hardship created by the pandemic along with the absence of robust government relief has intensified these dynamics, explained The Intercept.

can compound and deepen the vulnerability of the most economically insecure. As was true in much of the rest of the U.S., for the Indigenous immigrant communities of Sonoma, anxiety over losing income was as severe as concerns about health effects. The difference in Sonoma County was that a large proportion of the workforce lacks access to any meaningful income replacement. Undocumented workers cannot typically obtain unemployment or federal disaster supports like stimulus checks.

Even when California's Democratic Gov. Gavin Newsom offered $500 assistance cards, fears of deportation prevented many people from obtaining the benefits because they "were afraid that if they received assistance from the governor, the federal government would know and might be able to obtain information about where to find them," a community organizer told The Intercept.

"The paltry sum," wrote Brown, "wasn't worth the risk to their safety."

Instead, "as the pandemic raged, many of those who lost work in the service sector or other industries turned to the fields, where agricultural labor had been declared essential," she added.

With their own labor as the only resource available to countless people, the pool of workers willing to take on unsafe jobs will only expand. So long as government officials continue to prioritize the needs of business owners also hurt by disasters, workers are likely to find themselves in increasingly dangerous situations... What happens in California... will likely be mimicked across the country, as state and federal legislators grapple with the impacts of increasingly severe fires, floods, and heat. But far more than masks rules will be needed to protect workers in wildfire zones.

"What's needed more than anything," Brown argued in her story, "is an economic safety net in times of disaster so that people don't have to accept perilous work and changes to immigration laws, so they don't have to fear offers of help."