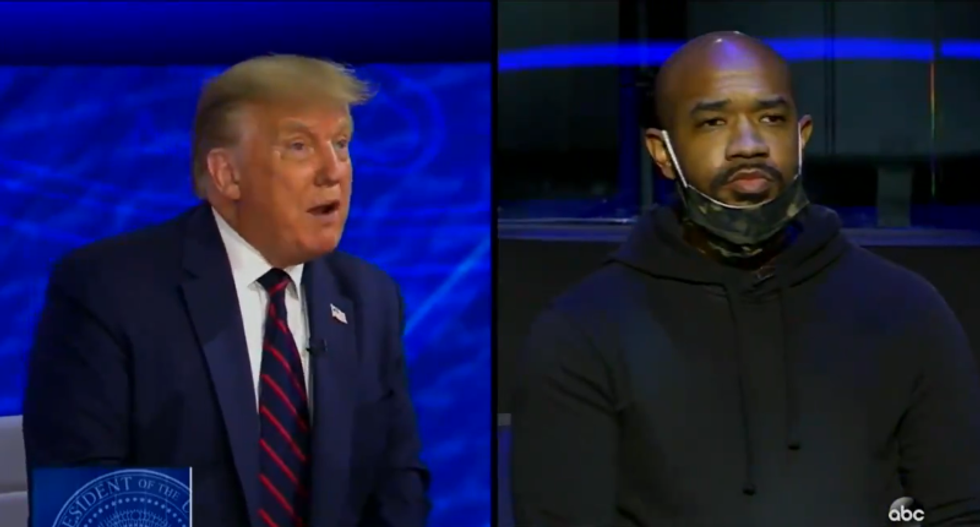 At President Donald Trump's Philadelphia town hall on Tuesday, Carl Day, an African-American pastor, asked the president to confront the realities of racial injustice in the country, only to be talked over and dismissed.

"You've coined the phrase Make America Great Again," said Day. "When has America been great for African-Americans in the ghetto of America? Are you aware of how tone-deaf that comes off to African-American communities?"

"Well, I can say this," said Trump. "We have tremendous African-American support. You probably have seen it in the polls. We're doing extremely well with African-American, Hispanic-American, at levels that you've rarely seen a Republican have."

"I mean, your statement is make it great again," Day pressed him. "So, historically, the African-American experience, especially in these ghettos that have been redlined, historically these ghettos that have systemically been set up and treated they have been, the conditions of the drugs, the guns and everything else that actually created the symptoms for what we see, that you profess to just be Democratic cities themselves, these things have historically been happening for African-Americans in these ghettos and we have not been seeing a change. Quite frankly, under your administration, under Obama's administration, under Bush, under Clinton, the very same things happen, the cycle continues to ensue and we need to see — because you say again, we need to see when was that great? Because that pushes us back to a time in which we cannot identify with such greatness and, I mean ... you have yet to address and acknowledge that there's been a race problem in America."

"Well, I hope there's not a race problem," said Trump. "I can tell you, there's none with me, because I have great respect for all races, for everybody. This country is great because of it. But when you go back six months and you take a look at what was happening, you can't even compare that with past administrations. When you look at income levels and a lot of things, because of the job situation, where they had the lowest income, the best unemployment numbers they've ever had, the Black community, by far."

Asked by a Black man to explain when America has every been great for Black people, Trump immediately changes the t… https://t.co/02gaPzyNQQ
— Aaron Rupar (@Aaron Rupar)1600219752.0