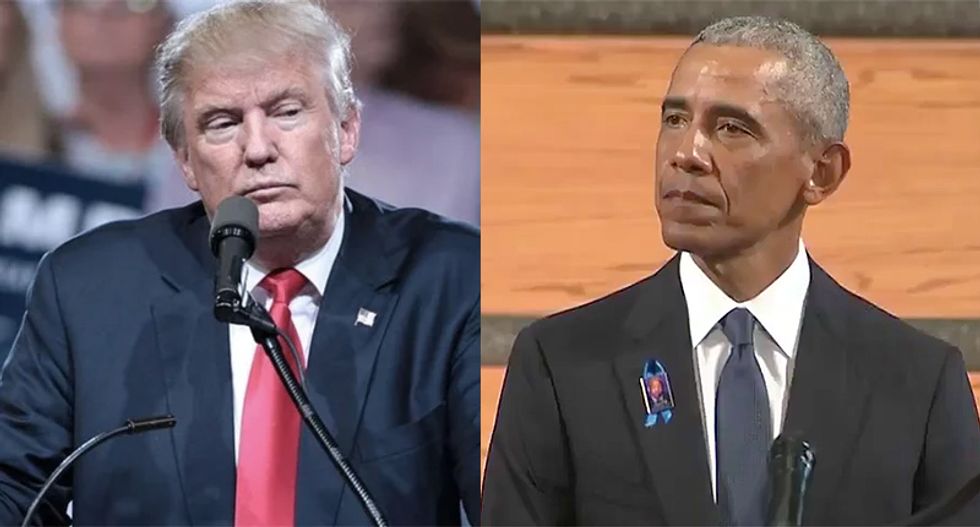 On Saturday, Snopes.com — one of the oldest and best-known online fact-check organizations — took a hard look at President Donald Trump's repeated claim that he inherited a "depleted" military from President Barack Obama.

Their verdict: the president is not telling the truth.

"The U.S. national defense budget was slightly reduced during Obama's second term, in large part due to efforts by Congress to limit government spending and the withdrawal of troops from the Middle East," wrote Dan Evon. "However, the military wasn't 'depleted' under Obama. The military never ran out of ammunition and never went 'years' without funding. The budget for national defense during the Obama's term of office totaled nearly $6 trillion."

As the report notes, this is not a new claim. Trump claimed in 2018 that "They never gave us money for the military for years and years. And it was depleted," and in 2019 he said the military had "no ammunition."

According to the report, it is true that certain elements of the military were cut back in the Obama administration, as the Iraq war drew down, the post-9/11 security state was relaxed, and Congress passed the sequester to curtail spending across the board. However, "The military the president inherited from Obama was not depleted or facing a massive readiness crisis, which resulted from massive underfunding in the Obama years. In fact, according to Gen. David Petraeus, who commanded our troops in both Iraq and Afghanistan and also headed the CIA, and Michael O’Hanlon, there was no readiness crisis and in 2016, the year Trump was elected, the state of our military was 'awesome.'"

"Nor was the defense budget seriously underfunded in the Obama years," said the report. "If one controls for inflation, in FY2021 dollars Obama spent $3.3 trillion in his first term compared with the $2.9 trillion under Trump. Moreover, while defense spending did decline slightly in Obama’s second term, it still amounted to $2.7 trillion, about $200 million, or 7 percent less, than Trump’s first-term budget." And the decline was due to the Budget Control Act — which was pushed through by then-Rep. Mark Meadows (R-NC), who is now Trump's chief of staff.