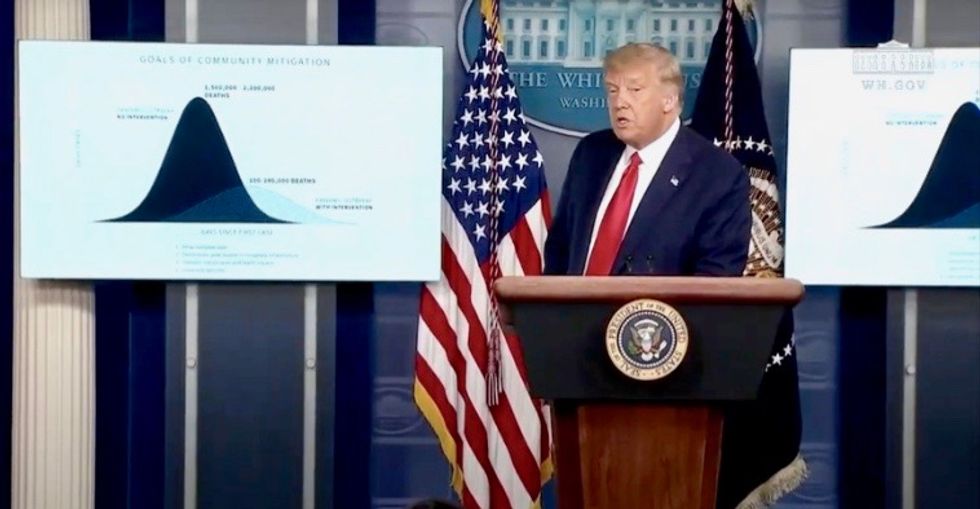 President Donald Trump is now claiming he has met his own expectations and prediction of the number of coronavirus deaths. That's false.

The early on insisted that if the number of people who died from COVID-19 were 60,000 he would have done a good job.

Then he upped the number.

That was almost exactly five months ago.

"This was our prediction," Trump said Wednesday, "that we do a really good job will be at about 100 – 100,000 to 240,000 deaths. And we're below that substantially and we'll see what comes out but that would be the good job, the not so good job was done he had been between 1.5 million I remember these numbers so well and 2.2 million."

No credible and respected expert predicted 1.5 million to 2.2 million deaths.

"That's quite a difference. So we're down," Trump said, again falsely.

He then went on to blame "blue states," as if they somehow are not part of the United States. He's also ignoring that the virus hit states which happen to be run by Democratic governors first.

"And that's despite the fact that the blue states had had tremendous death rates. If you take the blue states at we're at, at a level that I don't think anybody in the world would be at, we're really at a very low level but some of the states," Trump said, again falsely.

"Because if you look at certain of them, North Carolina, Pennsylvania, Michigan, and a couple of others. We have to get those states open. It's hurting people it's hurting people far more than the disease itself."

That, too, is false.