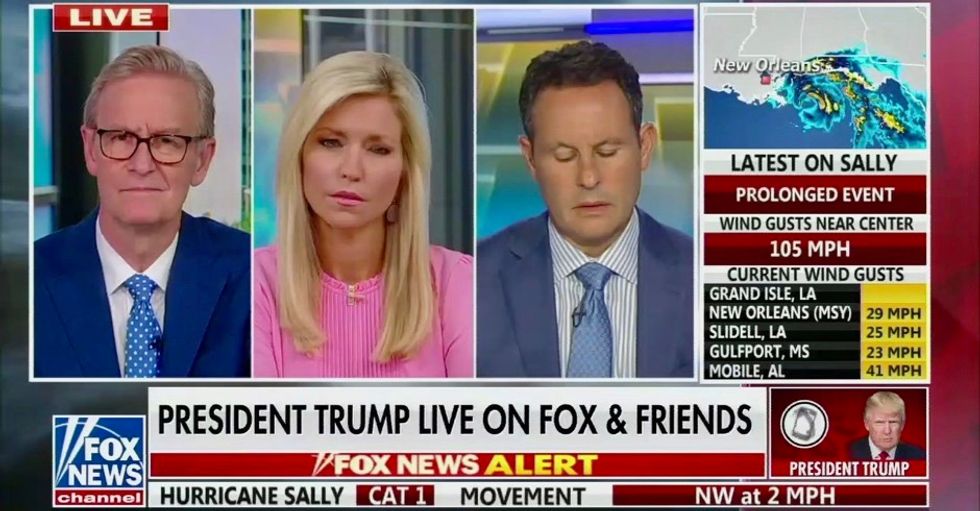 Short on campaign cash Trump is looking for as much free media coverage as he can get. The "Fox & Friends" hosts were stunned and horrified when he said he'll be doing this every week.

“You may want to do it every week, but Fox is not committed to that. We’re going to take it on a case-by-case basis," Steve Doocy abruptly said to the president at the end of the interview. Both hosts mentioned Joe Biden is welcome to come on the show too.

Here Steve Doocy tells Trump a lot of people are asking "why on earth" he talked to Bob Woodward 18 times.

It's not going well:

Usually later in the interview before we get the hollow-eyed, moderately horrified looks from the hosts but here we… https://t.co/mDVhdzbZIn
— Matthew Gertz (@Matthew Gertz)1600172260.0

"You have forests all over the world you don't have fires like you do in California, you know, in Europe they have forest cities you look at you look at countries, like, Austria, you look at so many countries they live in the forest they considered Forest Cities so many of them, and they don't have fires like this, and they have more explosive trees. They have trees that will catch easier, but they maintain their fire they've, they have an expression they thin the fuel the fuel is what's on the ground the leaves the trees that fall they're dry, they're like, they're like a matchstick you know after 18 months if they're underground longer than 18 months. They're very explosive and they have to get rid of that stuff."

Trump insists Nevada Democratic Governor Steve Sisolak tried to stop his campaign rally. He also claims Sisolak is in charge of the ballots (that's false, the Secretary of State is) and baselessly accuses him of election tampering.

No word yet on if Trump will be back Monday.