'Trump is a fraud, exhibit one billion': Trade deficit soars to 12-year high despite president's promises to wipe it out 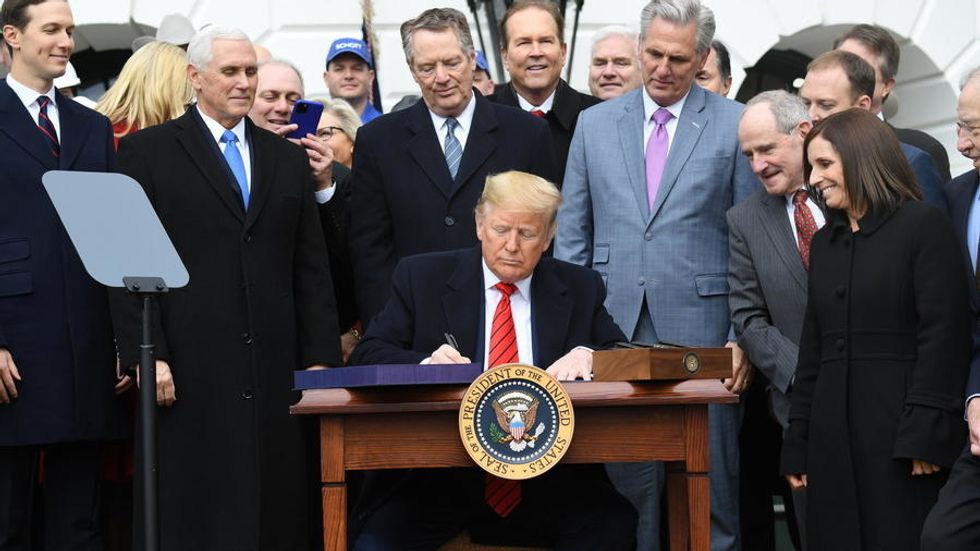 "Trump pledged to eliminate the trade deficit and end job outsourcing, but the overall 2020 deficit is on track to be larger than when he took office, and his Labor Department has certified more than 300,000 American jobs were lost to outsourcing and imports during his presidency."

Donald Trump promised on the campaign trail in 2016 that, if elected president, he would bring about a rapid and unprecedented decline in the U.S. trade deficit.

But new figures released by the Commerce Department on Thursday—nearly four years after Trump's victory in the 2016 presidential election—show that the trade deficit soared to a 12-year high in July due in large part to a surge in imports, bringing the total negative trade balance in the first seven months of 2020 to $340 billion.

"The unexpectedly large growth in the trade deficit is especially notable given that trade flows have declined overall because of the global Covid-19 crisis."

"Trump pledged to eliminate the trade deficit and end job outsourcing, but the overall 2020 deficit is on track to be larger than when he took office, and his Labor Department has certified more than 300,000 American jobs were lost to outsourcing and imports during his presidency," Lori Wallach, director of Public Citizen's Global Trade Watch, said in a statement.

Wallach noted that the 300,000 job-loss number is likely an underestimate given that it only "reflects the number of workers whose trade-related job losses were approved for Trade Adjustment Assistance (TAA) retraining and other benefits."

"The July 2020 deficit is the largest monthly deficit since July 2008, during the global financial crisis and related recession," said Wallach. "The unexpectedly large growth in the trade deficit is especially notable given that trade flows have declined overall because of the global Covid-19 crisis."

Democratic presidential nominee Joe Biden—who Trump has hit over his support for the job-killing North American Free Trade Agreement in the 1990s and now-dead Trans-Pacific Partnership under the Obama administration—highlighted the surging trade deficit on Twitter, writing that "American workers can't afford another four years of his failed leadership."

"In 2016, President Trump promised to reduce the trade deficit and said: 'You will see a drop like you've never seen before,'" Biden tweeted. "The reality? It's the highest it's been in 12 years."

"Trump is a fraud, exhibit one billion," tweeted Hanlon.

As the Associated Press reported Thursday, the new Commerce Department statistics show that "despite a number of high-profile trade battles and a renegotiation of the North American Free Trade Agreement with Canada and Mexico, America's trade deficits have remained stubbornly high" throughout Trump's presidency.

"For July, the deficit with China in goods totaled $31.6 billion, an 11.5% increase from the June imbalance," AP noted. "The goods deficit with Mexico hit a record high of $10.6 in July... The United States ran a deficit in goods trade of $80.1 billion in July, the highest on record."

The July trade deficit numbers come less than a month after a report by the Economic Policy Institute (EPI) found that despite Trump's repeated vows to "bring back" U.S. manufacturing jobs, the president's first-term trade agenda and disastrous handling of the coronavirus pandemic have "wiped out much of the last decade's job gains in U.S. manufacturing."

"The Trump administration has taken credit for 'reshoring' manufacturing jobs, but the data show that isn't true," said Robert Scott, senior economist and director of trade and manufacturing research at EPI. "Nearly 1,800 factories have disappeared under Trump between 2016 and 2018."

"Additionally, the U.S. trade deficit in manufactured goods rose significantly between 2016 and 2019," Scott added. "In fact, the real U.S. trade deficit has increased in every year since 2016, reducing GDP growth by roughly 0.25% annually over the past three years. Compounded with the devastation left by the coronavirus pandemic, the blue collar manufacturing workers need serious help from policymakers."