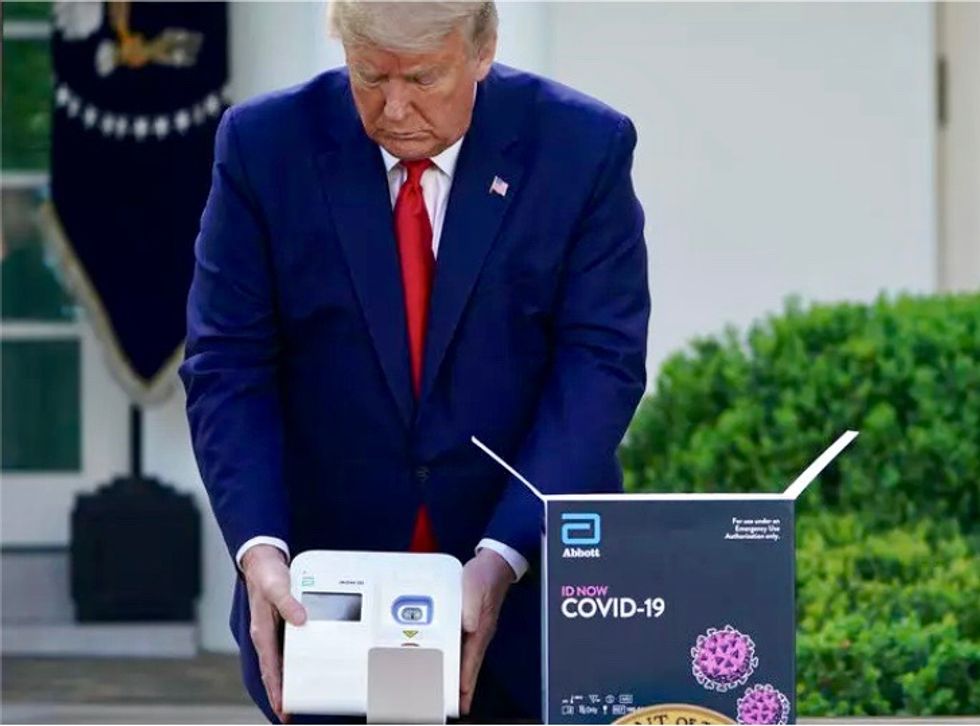 President Donald Trump's White House announced this week that by Nov. 1 they would have thousands of places where the coronavirus vaccine can be distributed, and they'll be up and ready to go. The problem with that promise is that all of the other promises Trump has made around this have proved to be false.

Speaking to Pulitzer-Prize-winning science reporter Laurie Garrett, MSNBC's Chris Hayes noted that it was just months ago that Trump promised to have virus testing centers in every Walmart, CVS, Walgreens and Target in the country. As it turns out, that not only didn't happen, only 4 percent of those stores opened testing centers.

It's a far cry from the promise of nationwide testing for anyone who wants a test.

"Some of Walgreens' testing sites are at shuttered stores, and all of Rite Aid's sites are at locations such as closed schools and vacant parking lots, not at the stores themselves," said NPR.

"On one level, none of us are surprised," said Garrett. "We have all been talking about will there be an October surprise? There certainly have been steps taken to push the FDA to approve and approve. About a month ago, it was announced that on Oct. 22, the special advisory panel at the FDA that would decide whether or not to greenlight a vaccine would be convening. So, the timing was already kind of sitting out there. But this letter goes a whole other step. I mean, my jaw was on the floor when I saw it."

She said that she can't remember ever seeing anything like it for any other vaccine in the United States before.

"It's basically telling governors all over the states and territories that you got to be ready for this private company to come in and run a giant operation of vaccination," she explained. "We don't have a vaccine. We don't have one. You're all still in various stages of clinical trials. None have completed phase three, the final clinical trials to tell you whether it works and whether it's safe or not. You need to have at least 30,000 people in each of these clinical trials. Half of them get a placebo, half of them get a vaccine. You want them to live in a place where the vaccine is rapidly spreading, the prevalence is high so that in a short amount of time, maybe two weeks, you can see whether or not one arm, you know, the placebo arm or vaccine arm has significantly more or less infection and you want to be able to follow it long enough to make sure it's safe."

There are only 59 days until now and Nov. 1 when Trump announced that these centers would be opening.

"I mean, they have to be working around the clock, have absolutely nothing go wrong, have every single volunteer show up for every single appointment and zoom through this at a speed unlike anything we have ever seen in the history of pharmaceuticals," Garrett said.