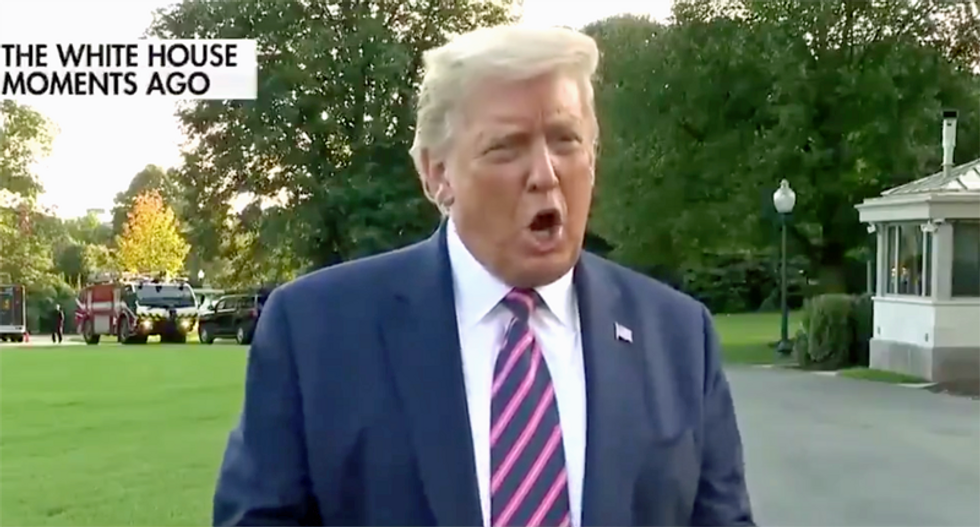 "They aren't hiding that they want to confirm a new Trump justice so that justice can steal the election."

Speaking to reporters on the South Lawn of the White House Tuesday evening, President Donald Trump frankly stated his motive for rushing to fill the Supreme Court vacancy left by the passing of Justice Ruth Bader Ginsburg: To help him dispute the legitimacy of mail-in ballots in the November election.

"We need nine justices. You need that. With the unsolicited millions of ballots that they're sending, it's a scam, it's a hoax," said the president, who for months has falsely attacked mail-in voting as highly susceptible to fraud. "Everybody knows that. And the Democrats know it better than anybody else."

Trump said pushing his nominee through the Republican-controlled Senate before Election Day—now just over 40 days away—"would be a very good thing" and baselessly claimed Democrats are "trying to sow confusion and everything else."

"And, you know, when they talk about Russia, China, and all these others, they will be able to do something here because paper ballots are very simple—whether they counterfeit them, forge them, do whatever you want. It's a very serious problem," Trump said, without offering a shred of evidence for the supposed threat of ballot manipulation by other nations. "And the Democrats know what they're doing is wrong, and all they want to do is go forward with it. So I think you're going to need the nine justices."

Trump's remarks Tuesday were the president's latest attempt to preemptively cast doubt on the results of the November election by lying about mail-in voting, which states nationwide have expanded in response to the ongoing coronavirus pandemic.

As Buzzfeed reported last week, the president's reelection campaign and the national Republican Party are "devoting millions of dollars to wage a state-by-state legal battle against mail-in voting during the coronavirus pandemic, not only suing state officials but also intervening in cases where they aren't a party to limit how Americans can vote from home."

With the unprecedented surge of mail-in ballots expected to delay the final election results for days or even weeks, voting rights groups and Democratic lawmakers are growing increasingly concerned that Trump could falsely declare victory on Election Night or refuse to accept the results if he loses to Democratic presidential nominee Joe Biden.

The president's latest comments, observers warned, suggest he is looking to rely on the conservative-dominated Supreme Court to provide his assault on the legitimacy of the election with a stamp of legal approval.

"They aren't hiding that they want to confirm a new Trump justice so that justice can steal the election," Ian Millhiser, senior correspondent at Vox, tweeted late Tuesday.

Journalist Matt O'Brien said the president "is like a Bond villain who can't help but tell us about his plan to rig the election."

"That's telling his supporters to vote in person so he wins the votes that cast on Election Day itself and then suing to stop absentee ballots from being counted," O'Brien added. "Bush v. Gore 2.0 is the plan."

Earlier Tuesday—just before Sen. Mitt Romney (R-Utah) officially ensured Senate Majority Leader Mitch McConnell (R-Ky.) will have enough votes to move forward with the nominee—Trump tweeted that he will announce his Supreme Court pick on Saturday.

The current favorites, according to Politico, are Amy Coney Barrett and Barbara Lagoa, right-wing judges who are both viewed as potential threats to Roe v. Wade.

"Senate Republicans on the Judiciary Committee met midday Tuesday to discuss different scenarios for how quickly they can process the nominee," Politico reported. "No final decision was made, but a hearing could take place starting the week of October 12, according to a GOP aide."