Trump attacks Biden for not holding rallies during pandemic: ‘This guy never goes out’ 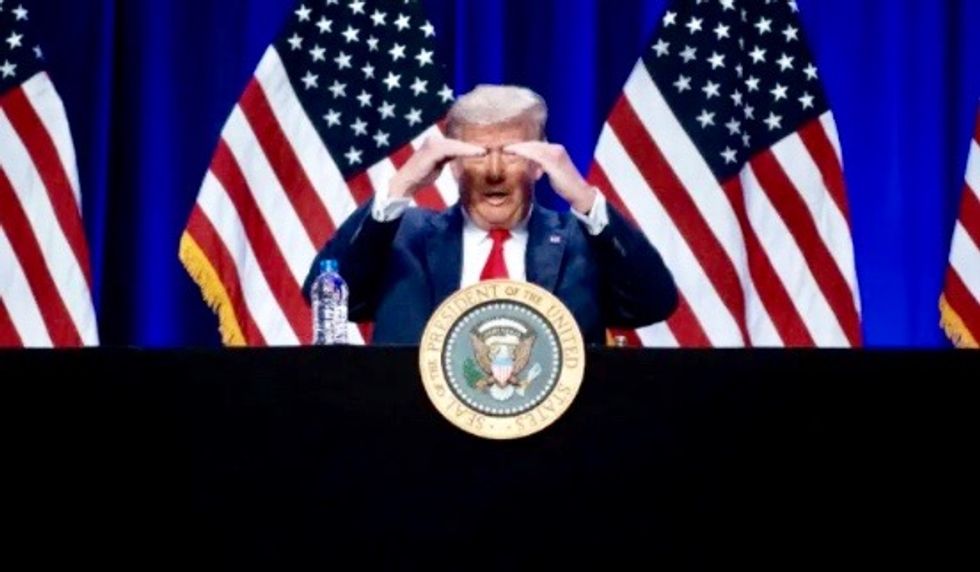 With just 39 days until the US election, President Donald Trump ramped up his campaigning with back-to-back events Friday in battleground states -- a frenetic pace in contrast with the more sedate approach of Democratic rival Joe Biden.

The 74-year-old president's grueling schedule includes hosting events in three states plus the capital Washington in a 12-hour slog that culminates with a nighttime rally in Virginia.

Trump -- who trails Biden in national polling and is narrowly behind in several swing states seen as crucial to his path to re-election -- is under pressure to make the most of the remaining weeks before the November 3 election.

During his whirlwind day the president mocked his rival for a lower-energy campaign, saying Biden was "staying in again today."

"This guy never goes out. It's terrible huh?" he told a black economic empowerment event in Atlanta, where few people wore masks and social distancing was non-existent.

"If I lose to a man who doesn't campaign... I don't know," he told the laughing crowd.

Biden traveled from his home in Delaware to Washington on Friday to attend a ceremony at the US Capitol as late Supreme Court justice Ruth Bader Ginsburg lay in state there.

But there was no in-person campaigning on the former vice president's schedule.

In a bid to fire up his base over the weekend, the president on Saturday will announce his pick to replace the liberal icon Ginsburg, who died last week at 87.

Trump began the day in Florida with a roundtable with Latino voters, a crucial constituency in the swing state.

Biden has "been very bad to Hispanics," the president said at the event which took place at his golf club in Doral, near Miami.

"I'm a wall between the American dream and chaos."

Trump next flew to neighboring Georgia, which has voted Republican in the last six elections but is now rated a toss-up, where he insisted that as president he did "even more than I promised" for African Americans.

"I did more for the black community in 47 months... than Joe Biden did in 47 years," he said, repeatedly swiping at Biden's legislative record in co-sponsoring 1990s tough-on-crime legislation that many experts say resulted in high incarceration rates for black Americans.

Trump said he was unveiling a "platinum plan" that aims to increase capital to African Americans, create three million new jobs for the black community and implement "the highest standards of policing."

Trump then returns to Washington to gather with supporters before flying to a Make America Great Again nighttime rally at an airport in Newport News, Virginia.

The state's Democratic governor meanwhile announced that he and his wife have tested positive for Covid-19.

"As I've been reminding Virginians throughout this crisis, Covid-19 is very real and very contagious," Governor Ralph Northam said in a statement.

Trump appears to dismiss coronavirus concerns at his events, where he appears maskless and crowds are often packed together -- a scenario his own government experts have warned against.

Biden's campaign has been cautious ever since the pandemic forced several US states into extended lockdown, with the US death toll now topping 200,000.

Biden, 77, spent months mostly hunkered down in his Delaware home. While he has increased campaigning in swing states like Wisconsin, Pennsylvania and Michigan, his events are tightly scripted with only occasional interaction with voters.

The Democratic candidate visited Florida last week to kick off Hispanic Heritage Month, but the event featured no large audience.

His recent go-to strategy to counter Trump appears to be releasing statements that address the president's various campaign stops.

"Since President Trump's last visit to Florida just two weeks ago, over 40,000 more Floridians have tested positive for coronavirus and the state marked 13,000 Covid-related deaths," Biden said Thursday as Trump flew to a Jacksonville rally.

"President Trump does not have a plan, but I do -- to beat Covid-19, build our economy back better, and protect and build upon the Affordable Care Act."

Trump's barnstorming comes as his recent refusal to clearly guarantee a peaceful transfer of power -- "we're going to have to see what happens," he said Wednesday -- has stirred outrage among Democrats.

Pressed on his remarks, White House spokeswoman Kayleigh McEnany told reporters that "the president will accept the results of a free and fair election."