US student charged with murder of Italian policeman apologizes in court 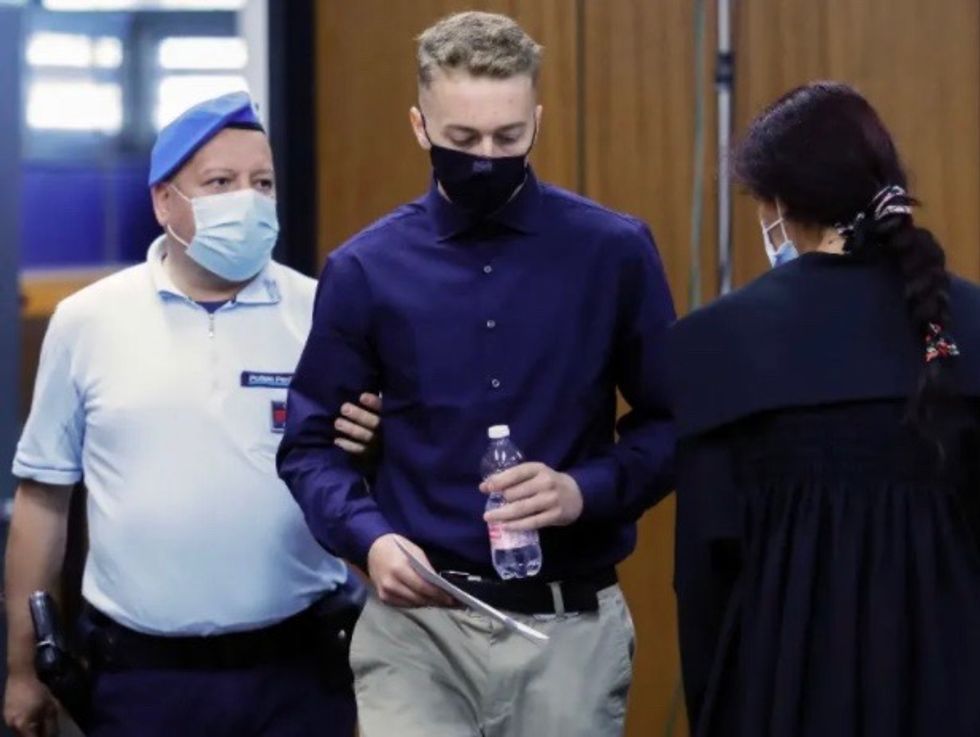 A US student on trial for killing an Italian policeman during a failed drug bust last year tearfully apologised on Wednesday, saying he would never forgive himself.

Finnegan Lee Elder, 20, read a statement in front of the Rome court in which he said the evening of July 26, 2019 was "the worst night of my life", according to Italian news agencies at the hearing, which is closed to most media due to coronavirus restrictions.

Prosecutors say Mario Cerciello Rega was killed in an unprovoked nighttime attack after he and his partner, both in plain clothes, approached the two American friends on vacation in Italy, who had earlier tried to buy drugs.

Elder has admitted to stabbing policeman Mario Cerciello Rega several times with an eight-inch combat knife, but both he and Hjorth say they were jumped from behind by men they thought were drug dealers.

"I want to apologize to everyone, the Cerciello family and his friends," Elder, in tears, told the court.

"To the whole world. That night was the worst night of my life and if I could go back and change things I would do it now, but I can't," he added.

"I want to say that that night was the worst night of my life, not because I am in prison, away from everyone," he said.

"There are other reasons: I took a person's life, I took a husband from his wife, I broke a bond between brothers. And I have taken a son from his mother. I will never be able to forgive myself for all this."

Cerciello's death was front-page news last year due to an outpouring of public sympathy for the policeman, who had just returned to work after his honeymoon. But there was also widespread shock over leaked photos of Natale-Hjorth blindfolded and handcuffed inside a police station.

Natale-Hjorth fought with Cerciello's partner during the attack. Even though he did not stab Cerciello, under Italian law he faces the same charge of "voluntary homicide" with a special circumstance of killing a police officer.

Elder and Natale-Hjorth, both from San Francisco, were 19 and 18 at the time of the killing.

A confusing web of events led to the 32-second attack, beginning with the young Americans looking for cocaine earlier in the evening.

After an intermediary introduced them to a drug dealer who sold them aspirin instead, the teens stole the bag of the intermediary in retaliation, later demanding money and drugs to return it.

The dealer was actually an informant, who reported the bag's theft to police. Cerciello and his partner Andrea Varriale left their designated patrol area and showed up at the designated exchange point near the teenagers' hotel before the attack.

Defence attorneys have tried to show that police committed multiple errors the night of the incident -- alleging lies by Varriale, a falsified police report and the withholding from the defence of evidence that the drug dealer was a police informant.

They hope these missteps will give credence to the young men's claim that the officers did not show their badges before the attack.

In July, Varriale testified that the two officers approached the young men from the front and showed their badges, although Cerciello's badge was never subsequently found.

Varriale admitted to lying when he said following the attack that both officers had been armed, as they should have been while on duty, and that he conspired with a superior officer to lie about it.

In his statement in court, Elder said "many mistakes were made that night. Mine was the biggest."

"I would like to go back and change things, but I cannot. All I can say is that I feel remorse. I am in pain for the suffering I have caused. I am sorry and very sad for what happened to Cerciello".

MSNBC's Joe Scarborough ripped House minority leader Kevin McCarthy for making up "stupid" nicknames for a pair of Republicans who refuse to go along with Donald Trump's election lies.

Reps. Liz Cheney (R-WY) and Adam Kinzinger (R-IL) were among 10 GOP lawmakers who voted to impeach Trump for his role in the Jan. 6 insurrection, and they will sit on the House panel investigating that assault on democracy -- and McCarthy mocked them as "Pelosi Republicans."

A financial scandal involving an opaque, loss-making Vatican property deal paid for with charity funds goes to trial Tuesday after a two-year probe that has implicated a once-powerful cardinal.

Vatican prosecutors allege that ten defendants, including high-rolling London financiers and church employees, engaged in various crimes such as embezzlement, fraud, and corruption.