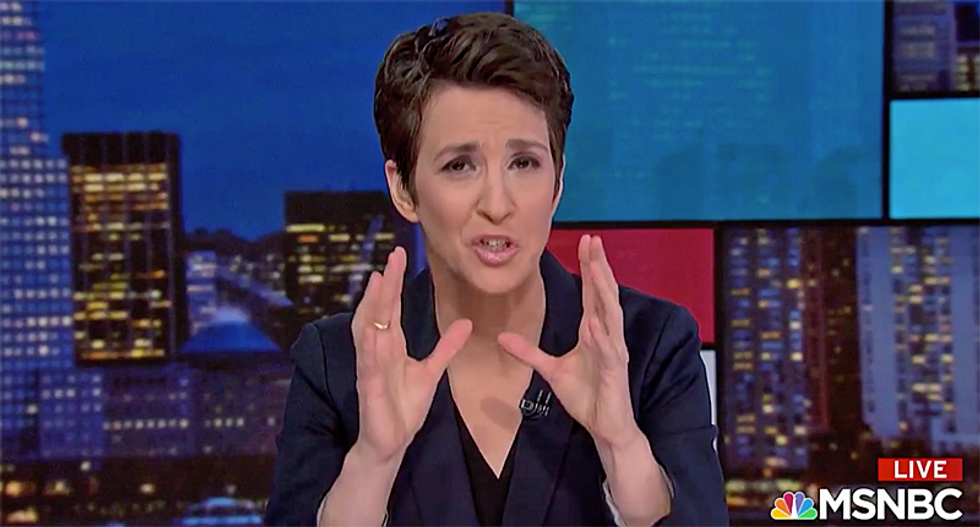 The host of "The Rachel Maddow Show" on MSNBC updated her viewers on the latest reporting on President Donald Trump's attacks on the American military.

"Now tonight the yuck factor has come to pretty gross focus with a just jaw-dropping new piece reporter by Jeffery Goldberg that was published by The Atlantic. It does put the focus on something odd and wrong at the center of this," she explained. "You see the headline here, 'Trump says Americans who died in war are losers and suckers.'"

The host read extensively from the story.

"When President Donald Trump canceled a visit to the Aisne-Marne American Cemetery near Paris in 2018, he blamed rain for the last-minute decision, saying that “the helicopter couldn’t fly” and that the Secret Service wouldn’t drive him there. Neither claim was true," Maddow read from the report. "Trump rejected the idea of the visit because he feared his hair would become disheveled in the rain, and because he did not believe it important to honor American war dead, according to four people with firsthand knowledge of the discussion that day."

The reporting was confirmed by the Associated Press.

A senior Defense Department official I just spoke with confirmed this story by @JeffreyGoldberg in its entirety. Es… https://t.co/vkExCh2XOa
— James LaPorta (@James LaPorta) 1599173923.0

"In a conversation with senior staff members on the morning of the scheduled visit, Trump said, 'Why should I go to that cemetery? It’s filled with losers.' In a separate conversation on the same trip, Trump referred to the more than 1,800 marines who lost their lives at Belleau Wood as 'suckers' for getting killed," she continued. "Belleau Wood is a consequential battle in American history, and the ground on which it was fought is venerated by the Marine Corps. America and its allies stopped the German advance toward Paris there in the spring of 1918."