WATCH: Pat Robertson predicts 5 years of ‘paradise’ – which he says includes the end of Black Lives Matter and Antifa 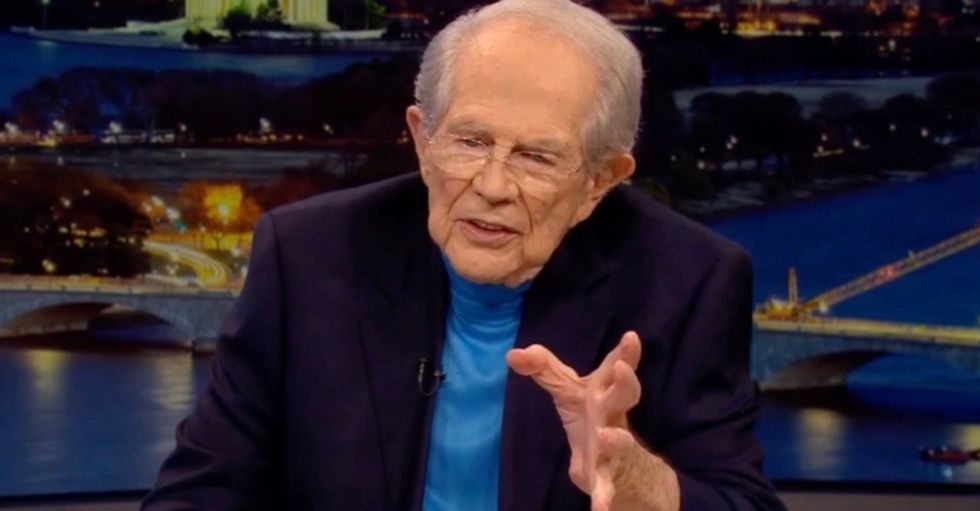 To televangelist Pat Robertson "paradise" means the end of the racial justice activism group Black Lives Matter, and the end of the fascism-fighting group Antifa.

Robertson, the 90-year old former preacher whose net worth a decade ago was placed at $200 million to $1 billion, is predicting a four or five year period of paradise, thanks to a right wing prayer rally held in Washington, D.C. this past weekend. His predictions are frequently wrong,

“I believe that what’s happened out there on Saturday with all this prayer, I think God is going to hear it, and we’re going to see a dramatic change in our society,” Robertson said, as Right Wing Watch's Kyle Mantyla reports. “I think the dictators of this world will be coming down. I believe that we’re looking at four or five years of really — it’ll be like paradise because the devil is going to be bound for time.”

Also included in Robertson's definition of paradise is the outlawing of abortion, and a taking down of dictators.

“The dictator of China and the dictator of Turkey and places like that, they’re going to come under the wrath of God, and God’s going to destroy the destroyers of the Earth,” Robertson said. “And in the next few years, instead of having something really bad coming, I think something really good is coming. I think the Supreme Court is just one evidence. We may stop this awful slaughter of abortion. We’ve had 60 million unborn babies killed in America, and there’s a real good possibility with a shift on the Supreme Court that we could overturn Roe v. Wade.”

“There’s going to be a major shift in Congress, in the Senate, in the House,” Robertson continued. “It’s going to be a good thing. We’re looking at hope not, not disaster. I think disaster was on the way, coming into our society with Antifa and the radical group that has got a named called Black Lives Matter and other groups like this that had communist influence. I think the Lord is going to put an end to it ,and we’re going to see a period of blessing.”

The Senate is currently controlled by Robertson's party, the Republicans, so it's unclear how a "major shift" there would support Robertson's prediction.

Pat Robertson Predicts 'The Return' Prayer Rally Will Unleash Five Years of 'Paradise' in the U.S. from Right Wing Watch on Vimeo.