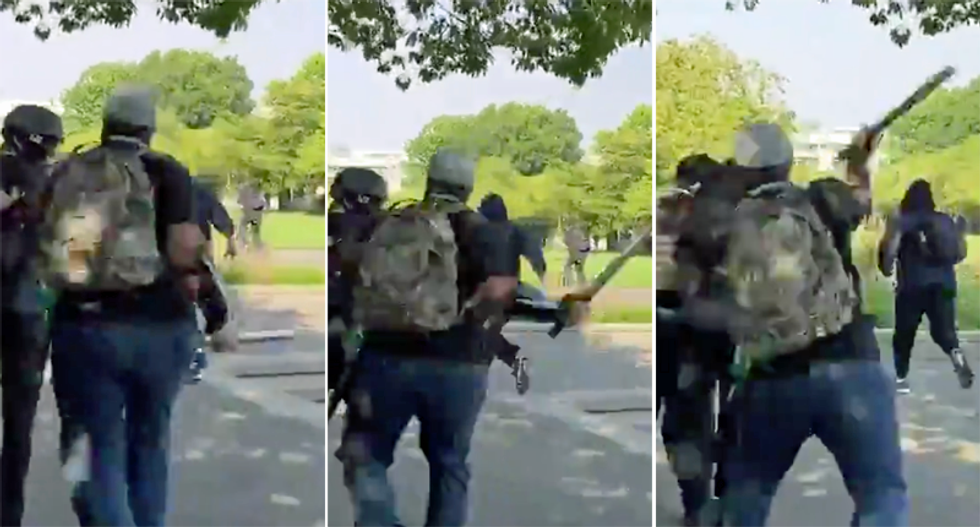 Graphic video was posted on Twitter on Labor Day by Oregon Public Broadcasting.

"Hundreds of pro-Trump demonstrators gathered in Oregon City on Labor Day for a planned vehicle rally," Jonathan Levinson and Sergio Olmos reported. "The rally’s organizers did not lead the caravan into Portland, as happened at the previous week’s event. Instead, vehicles drove from Oregon City and headed south on Interstate 5. Some drivers traveled with their vehicle doors open on the highway, or with people perched on top of vehicles as they drove."

The caravan officially ended in Woodburn.

"Members of the Proud Boys, an extremist group that regularly engages in street violence, and other demonstrators traveled to Salem after the official rally concluded. They congregated at the Oregon State Capitol Building, where some carried firearms and baseball bats," the network reported. "In one clash between the groups, members of the pro-Trump group attacked a counterprotester with a baseball bat and pepper spray. After a second similar attack, Salem police officers and Oregon State Police troopers arrested at least two men with the conservative demonstrators."