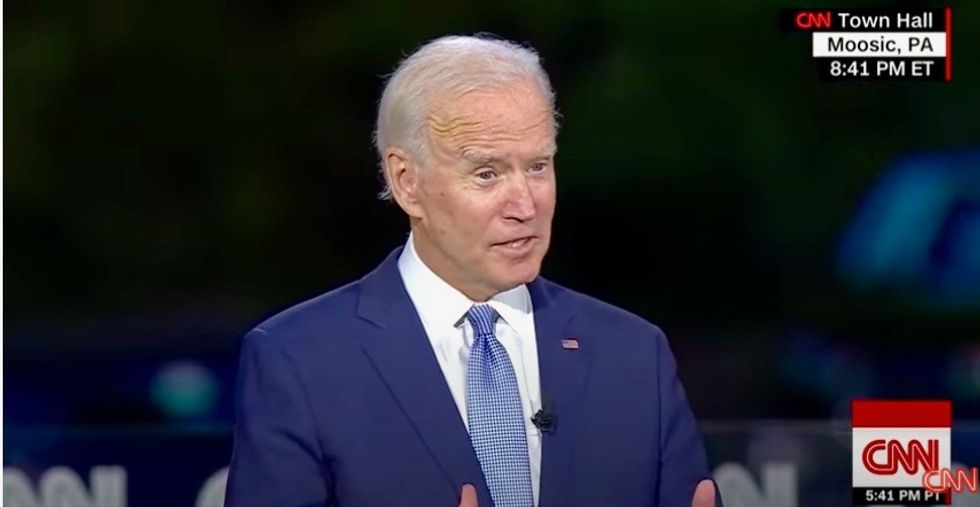 Joe Biden on Thursday lashed President Donald Trump over his "close to criminal" handling of the coronavirus as the Democrat fielded questions from voters impacted by the pandemic in a state that is key to his election hopes.

Returning to the gritty city of his birth, the former vice president engaged in an outdoor town hall in Scranton, Pennsylvania, where he painted himself as the champion of hardworking Americans who he said have been ignored by a president more concerned about boosting Wall Street than helping working families.

Biden, appearing energized as he handled participants' questions, also accused Trump of knowing the seriousness of the coronavirus threat early this year and hiding it from the nation.

"He knew it and did nothing. It's close to criminal," Biden said in one of several fiery criticisms of Trump.

"This president should step down," he added.

The 77-year-old candidate also used a populist inflection, framing the 2020 election between him and billionaire real estate mogul Trump as "a campaign between Scranton and Park Avenue."

Blue-collar Americans -- like the family Biden grew up in -- "are as good as anybody else," he said.

"And guys like Trump, who inherited everything and squandered what they inherited, are the people that I've always found a problem with -- not the people who are busting their neck."

The tough remarks appeared aimed at working-class white voters with whom he must do better if he is to win back swing states that went to Trump in 2016.

Biden also showed his famously empathetic side when speaking to questioners who had medical ailments, whose relatives died from Covid-19 or who were suffering financially.

With less than seven weeks before the November 3 election, Biden has ramped up his public appearances after spending large chunks of time at his Delaware home, even as Trump repeatedly barnstorms swing states.

Now both candidates are hitting the physical campaign trail in earnest, although still in different ways.

Trump returned to Wisconsin Thursday for a public rally fueled by his signature bravado -- a contrast to Biden's quieter style.

Ahead of his departure, Trump railed on Twitter against the move by many states to encourage voters to mail in their ballots, thereby avoiding possible coronavirus risks in polling stations.

The shift, which is popular with Democrats, will promote "ELECTION MAYHEM," he tweeted, claiming that the results of the November 3 vote "may NEVER BE ACCURATELY DETERMINED."

He offered no evidence for his claims, and US mail-in voting has never been tied to any wide-scale fraud.

Biden is attempting to project a calming alternative to Trump's fury.

At the CNN town hall Biden took questions from a live, socially distanced audience of 100 people, who parked in front of the stage to watch the event.

Trump focused on promises of economic growth -- one area where polls consistently show him ahead of Biden -- and claimed that under the Democrat pension funds would "go down like to depression levels."

Biden has largely kept close to his home in Delaware during the pandemic which has so far killed nearly 200,000 Americans.

He has traveled to swing states like Wisconsin, Florida and Pennsylvania, but has dodged crowds and engages with voters in small, controlled settings.

The dueling events come amid rising tensions over the handling of the pandemic, and Trump's insistence that a safe and effective vaccine was just weeks away.

"I don't trust the president on vaccines," Biden said, explaining that he trusts the government's top infectious disease expert Anthony Fauci instead.

The animosity has ramped up between Trump and Biden ahead of their first debate, scheduled for September 29 in Ohio.

He is also ahead in several key battleground states like Florida, Michigan, Pennsylvania and Wisconsin -- all won by Trump in his shock 2016 election victory -- although by dwindling margins.