'Yet another alarm bell': Ice chunk twice the size of Manhattan breaks off Greenland glacier Amid Record Arctic Warming 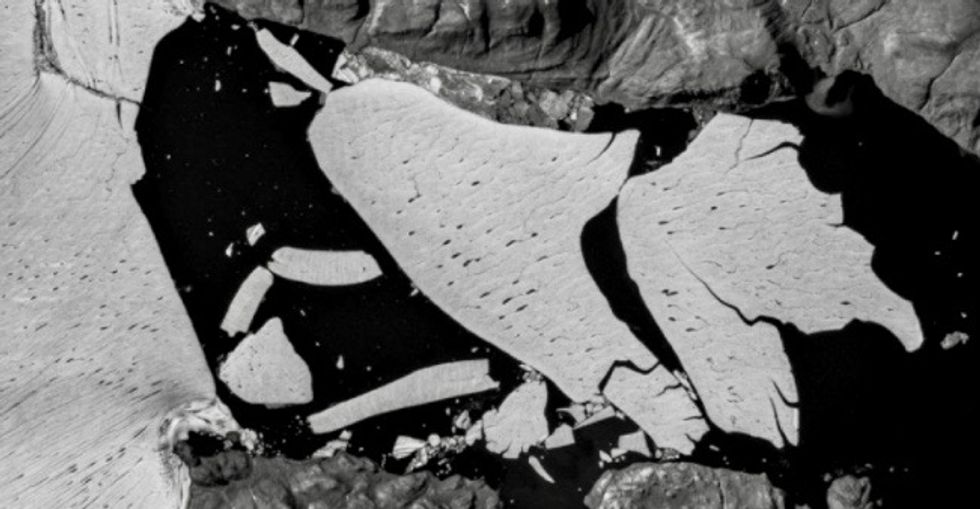 News of the development came as the National Oceanic and Atmospheric Administration declared this summer the hottest ever recorded in the Northern Hemisphere.

A chunk of ice nearly twice the size of Manhattan has broken off from Greenland's largest remaining glacier and fallen into the ocean, a frightening phenomenon that researchers and environmentalists attributed to record-breaking Arctic warming driven by the human-caused climate crisis.

"This is yet another alarm bell being rung by the climate crisis in a rapidly heating Arctic," Greenpeace spokesperson Laura Meller told the Associated Press.

In a statement announcing the development on Monday, the Geological Survey of Denmark and Greenland (GEUS) said the Nioghalvfjerdsfjorden ice shelf has lost 160 square kilometers since 1999.

"We should be very concerned about what appears to be progressive disintegration at the Arctic's largest remaining ice shelf," said Jason Box, a glaciology professor at GEUS.

Jenny Turton, a researcher at Germany's Friedrich Alexander University, noted that "the last few years have been incredibly warm in northeast Greenland."

"We had very early melt onset in 2019 linked to the heatwave across Europe and Greenland," said Turton. "The atmosphere in this region has warmed by approximately three degrees Celsius since 1980 and record-breaking temperatures have been observed in 2019 and 2020."

In a blog post on Tuesday, University of Michigan history professor Juan Cole writes "in the old days before human beings started burning so much coal, gasoline and natural gas, there were seasonal changes to the ice shelf. It would melt a bit in the summer but then grow back in the winter. Now it is just melting."

"Speaking of the disintegration of glaciers, it is happening in Antarctica, too," Cole notes. "There are two gargantuan glaciers, Pine Island and Thwaites, that are already responsible for 5% of sea level rise. They anchor the West Antarctic Ice Shelf. If they become unmoored, and the parts of the ice shelf that are not already in the water plop in to the ocean, it would raise sea level by an average of 10 feet over time. That would pretty much do in Miami and New Orleans, but also parts of lower Manhattan. It would be a catastrophe."

News of the latest breakage from the Arctic's largest ice shelf came as the National Oceanic and Atmospheric Administration (NOAA) announced Monday that this summer has been the hottest ever recorded in the Northern Hemisphere.

"The three-month season from June through August 2020 was the Northern Hemisphere's hottest meteorological summer on record, surpassing both 2019 and 2016 which were previously tied for hottest," the agency said in a statement summarizing its findings. "This period, which also marks the Southern Hemisphere's winter, was Earth's third warmest in the 141-year record at 1.66 degrees F (0.92 of a degree C) above the 20th-century average."