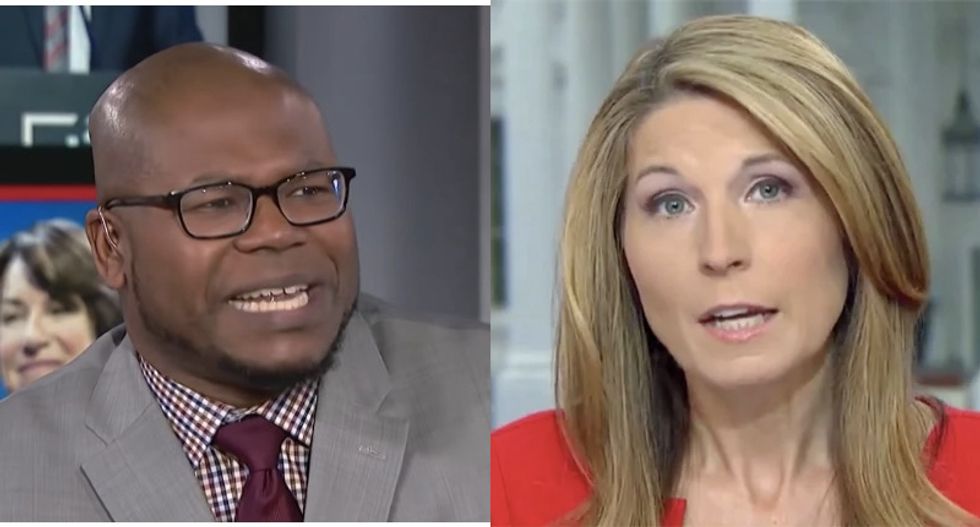 A frustrated Jason Johnson lamented his exhaustion and sadness that in Louisville, Kentucky, there were militia members who were safer than people of color because of how people of color continue to be treated.

"You know, every time this happens, and this has happened a lot, I always tell myself before I go on air, I'm not going to get pissed or do any sort of performative tears or rage or anything like that," Johnson confessed. "And yet today, I can't help it. I'm so disgusted by this. I'm so disgusted by Daniel Cameron's performance."

He went on to say he is exhausted from the non-stop double standard for the way that people of color are treated on television, by the police, by communities and more.

"I am so sick and tired of Black people going on air and performing for violence and white supremacy and state-sponsored violence against Black people and claiming their mamas and claiming because of Black people they care about," the passionate Johnson continued. "This woman got shot in her house! When she was asleep! It's like Atatiana Jefferson got shot playing video games with her nephew at 2:00 in the morning. Like Botham Jean was eating ice cream and got shot on his couch. If cops bust into my house right now and shot me on the air, what Daniel Cameron basically told America is that that would be legal. If they thought that there was something wrong, I could be shot in broad daylight, on national television, in my house, because the cops can break in and shoot whoever they want if they're 'concerned.' That is why people are upset."

At the top of the show, MSNBC host Nicolle Wallace asked the reporter on the ground to go into detail about the different groups of people there. The terrorist militia group, the Three Percenters was on hand as well as other militias. There were people with "press" on their jackets that it was unclear if they were actually press and people who act like they are part of Black Lives Matter that the reporter speculated weren't actually members of the movement. He noted that many protesters were angry at the media, something Johnson said he can empathize with.

"That is why protesters are mad at the media because they're tired of these discussions being teased out in ways that give justifications for nothing other than state-sponsored white supremacy and killing of Black people," Johnson explained. "It is so infuriating and so maddening. And I empathize with the people who are there and I empathize with the protesters who are going to be home by 9:00, Nicole. That's the thing! The Black Lives Matter protesters, they're going to take their signs, and they're going to go home. And you're going to have a whole bunch of interlopers and white nationalists and Three Percenters and terrorists battling out in the street, like the 'No Church in the Wild' video."

He explained it's why Black Lives Matter protesters depicted by the right-wing and people like Donald Trump.

"I want to thank you for being so good in your opening, by saying, 'Hey, can we distinguish between the people wearing black and the folks protesting? Can we distinguish between the white nationalists walking around with guns and the people there who are centering around Breanna Taylor?' Because that's where the frustration comes from," he explained. "Not that another life was snuffed out, but that a lot of people aren't doing what you're doing, about our criminal justice system and the routine murder of Black people and those who want to co-op the experience for their own politics."

See the passionate comments from Johnson below: