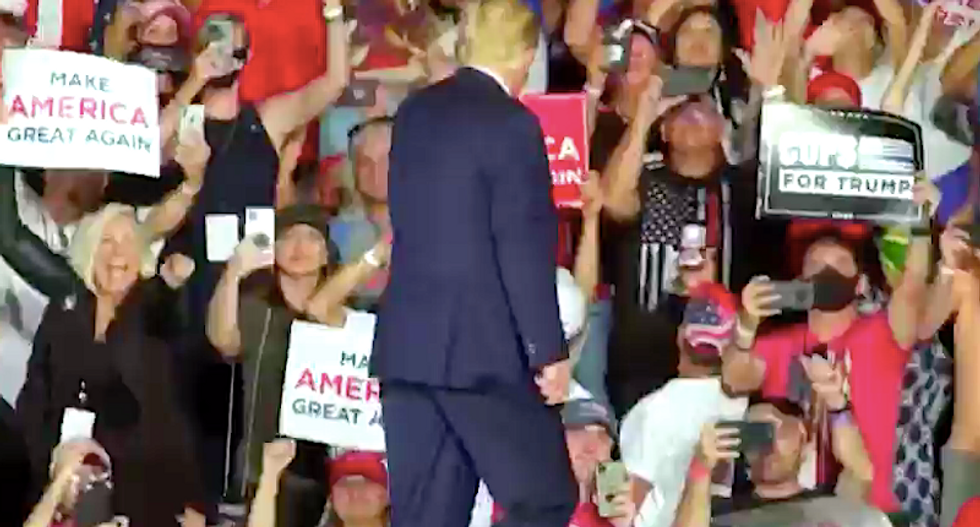 As the Trump administration ignores the pleas of its own health experts and embraces a "herd immunity" strategy that scientists have condemned as fringe and dangerous, researchers at the University of Washington School of Medicine are predicting an 80% spike in U.S. coronavirus deaths by February as cases continue to rise across the nation.

A model designed by experts at the Institute for Health Metrics and Evaluation forecasts that the U.S. coronavirus death toll will soar from around 217,000 at present to 389,087 fatalities by February 1.

Under the model's best-case scenario—in which all Americans adhere to mask guidelines—the U.S. death toll is predicted to rise to 314,000 by the beginning of February. If mask-wearing requirements are eased, the model predicts total U.S. deaths from the pandemic could rise to 477,000.

"We expect deaths to stop declining and begin increasing in the next one to two weeks. Daily deaths will reach over 2,000 a day in January even with many states reimposing mandates before the end of the year."

—Institute for Health Metrics and Evaluation

"We expect deaths to stop declining and begin increasing in the next one to two weeks," the institute's researchers told CNN. "The winter surge appears to have begun somewhat later than the surge in Europe. Daily deaths will reach over 2,000 a day in January even with many states reimposing mandates before the end of the year."

The alarming projection—which runs directly counter to President Donald Trump's repeated insistence that the pandemic is fading away—came as the U.S. reported more than 64,000 new coronavirus infections on Thursday, the highest single-day total since late July.

As the Washington Post reported Thursday, "In 44 states and the District of Columbia, caseloads are higher than they were one month ago, and many of the new infections are being reported in rural areas with limited hospital capacity."

The upward trend of new infections is "a very ominous sign," Dr. Peter Hotez, professor and dean of tropical medicine at the Baylor College of Medicine, told CNN. "This is the time when we could be entering one of the worst periods of our epidemic and one of our worst periods in modern American public health. I'm very worried for the nation."

Despite rising cases and the advice of public health officials, Trump—who was diagnosed and hospitalized with Covid-19 just two weeks ago—has resumed holding large in-person rallies across the nation ahead of next month's election, prompting concerns that the president's campaign is sanctioning "superspreader" events that could endanger both those in attendance and entire communities.

"Wisconsin has had over 10,000 Covid cases in three days," Rep. Mark Pocan (D-Wis.), co-chair of the Congressional Progressive Caucus, tweeted Friday. "Donald Trump, why are you still holding a superspreader rally here tomorrow?"

Just ahead of Trump's rally in Sanford, Florida on Monday—where many attendees did not adhere to mask or social distancing guidelines—Dr. Anthony Fauci said the president is "asking for trouble" by holding massive in-person events.

"We've seen that when you have situations of congregate settings where there are a lot of people without masks, the data speak for themselves," said Fauci, the director of the National Institute of Allergy and Infectious Diseases. "It happens. And now is even more so a worse time to do that, because when you look at what's going on in the United States, it's really very troublesome."

As Common Dreams reported earlier this week, the White House has embraced a declaration by a right-wing think tank calling for a "herd immunity" approach to the coronavirus pandemic—a strategy that experts have warned would result in millions of additional deaths if implemented without a widely available and effective vaccine.

In an interview with CNBC Thursday, Fauci denounced the so-called herd immunity approach as "nonsense" and "dangerous."

"By the time you get to herd immunity," Fauci said, "you will have killed a lot of people that would've been avoidable."