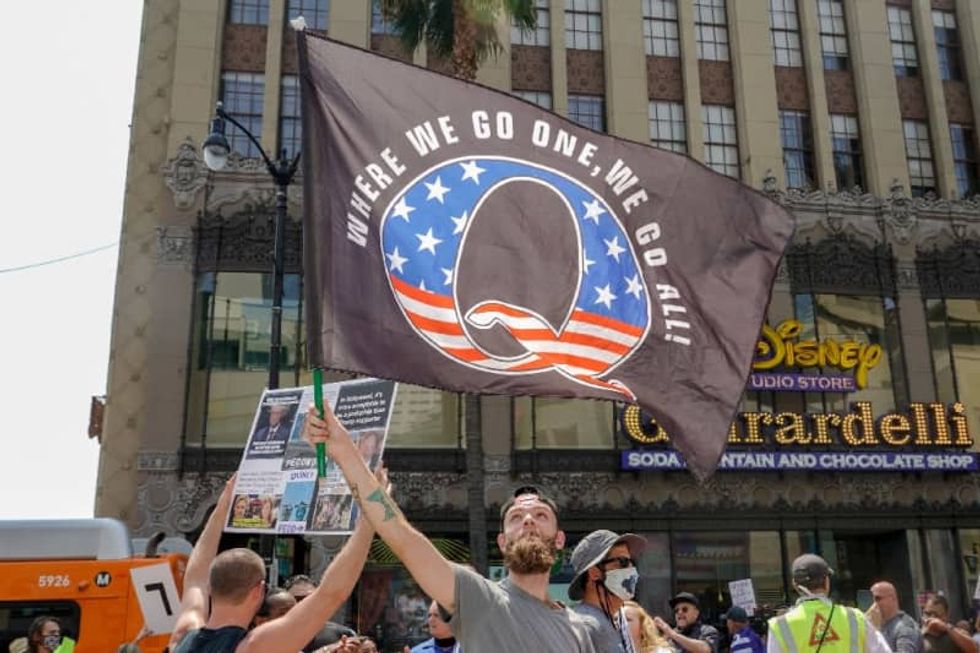 Powered by fear, anger and big tech's algorithms, the QAnon conspiracy movement has exploded from the US political fringe into the global mainstream during the pandemic.

Its influence can be seen at anti-lockdown and anti-mask rallies from Los Angeles, to London, Berlin and Melbourne -- with protesters warning, without evidence, that the pandemic is a conspiracy by a cabal of satanist paedophiles who control the world.

Experts say QAnon has grown sharply during the pandemic because it acted as a binding force -- mixing its core tenet with long-running conspiracy theories about vaccines and 5G mobile technology, anti-Semitic and white supremacist tropes, as well as far-right and libertarian politics.

"In some ways, the pandemic has created the perfect storm for conspiracy theories like QAnon to grow," Mackenzie Hart, a disinformation researcher at the London-based ISD think tank, told AFP.

ISD's analysis of QAnon-related posts on major social media platforms showed explosive growth between March and June this year -- nearly 175 percent on Facebook, 77.1 percent on Instagram, and 63.7 percent on Twitter.

This rise happened as coronavirus infections were spiking around the world, forcing governments to tighten social distancing rules and impose lockdowns of varying intensity.

While QAnon content has remained most dominant in the United States, researchers have found related social media content originating from around 70 countries.

Many QAnon followers believe the coronavirus is a conspiracy to take away people's liberties and control them using 5G and vaccines.

Some have branded it a "Plandemic", accusing prominent figures such as Bill Gates, Hillary Clinton and even Tom Hanks of involvement.

Its adherents have offered no credible evidence for any of it.

The movement is based on cryptic posts that started appearing on the anonymous messaging board 4chan in October 2017 -- later migrating to a similar site, 8kun -- by a user named "Q Clearance Patriot", who claims to be an American intelligence official with access to classified information.

Without proof, Q has said that a war is being waged by Donald Trump against the "deep state" and other elites, and his followers believe the US president is planning to go after his enemies -- including the satanist paedophile cabal.

The messages, called "Q drops", are then discussed and amplified on mainstream social media by adherents, some of whom have attempted to take matters into their own hands with threats of violence and murder, and even attempted assault and kidnapping.

The FBI has identified QAnon as among several conspiracy theories that could potentially lead to extremist violence.

But its pro-Trump followers have become increasingly visible, and have been regularly spotted at campaign rallies for the president.

"I don't know much about the movement, other than I understand they like me very much, which I appreciate," Trump said in August, describing QAnon followers as "people who love our country".

Joe Biden, his challenger in the November election, said last month that the conspiracy theory was "totally bizarre... It's mortifying, it's embarrassing, and it's dangerous."

Social media giants, who had been grappling with QAnon in the United States well before the pandemic, have now been forced to take even stronger measures as it has mushroomed into an international issue.

Their actions include tweaks to the recommendation algorithms that helped boost such content in the first place, according to tech analysts.

The firms all told AFP they have stepped up their vigilance. Some are especially monitoring for new hashtags and tweaked spellings meant to sneak past the filters.

But QAnon content is still rife online with the theories being fragmented and amplified by a bewildering array of powerful personalities who may not be fully aware of QAnon's most outrageous claims.

These characters range from politicians and entertainers to celebrity chefs, wellness gurus and Instagram influencers.

In one recent example, QAnon hijacked legitimate anti-child trafficking hashtags and campaigns, using them to bombard social media with baseless theories and accusations.

This has led to seemingly well-intentioned online influencers promoting QAnon hashtags, and bringing the fringe theory of paedophile elites preying on children into the mainstream.

Experts warned that QAnon could cause serious damage to the fight against the pandemic by undermining confidence in an immunisation campaign.

"What we're seeing is a globalisation of the anti-vaccine movement, the anti-science movement," said Peter Hotez, a vaccine scientist at the Baylor School of Medicine.

"That would be an incredible threat to public health."