'A source of inspiration' for egalitarians everywhere: Progressive International celebrates triumph of democracy in Bolivia 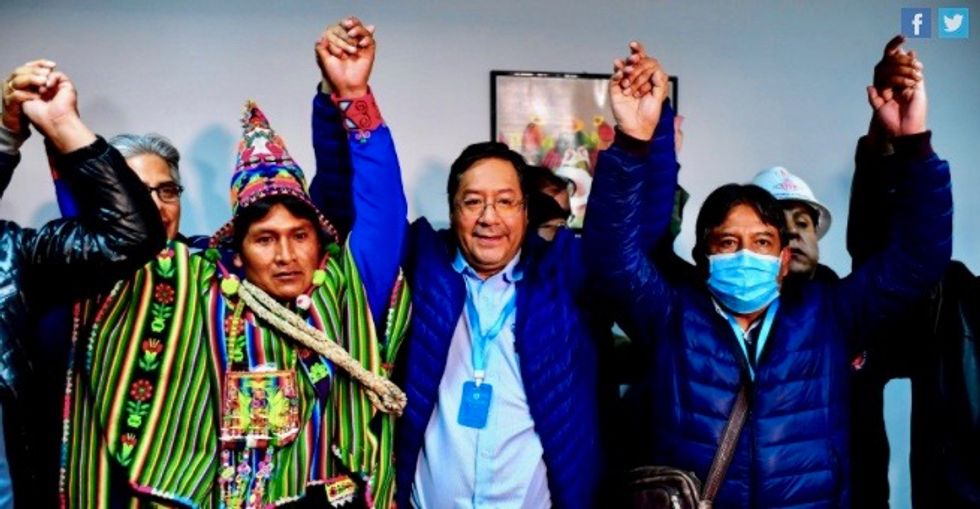 On the heels of socialist candidate Luis Arce's decisive victory in Bolivia's momentous presidential election, Progressive International on Tuesday praised the people of the South American nation for their courage, calling this week's "triumph of democracy" after last year's military coup that ousted then-president Evo Morales and installed a brutal right-wing regime a "source of inspiration for progressive forces everywhere."

"Bolivia's election not only showed the world how to defeat authoritarianism and its imperialist allies," Progressive International (PI) said in a statement. "It also revealed the power of international solidarity to defend democracy around the world."

PI, a global coalition fighting for a more egalitarian, democratic, just, peaceful, and sustainable society, used donations from the organization's worldwide membership to send a delegation to the cities of La Paz and El Alto "to ensure that the people of Bolivia exercise their democratic rights freely and fairly."

According to the accounts of members of the delegation, "Officials from Bolivia's de facto government attempted to derail the mission with escalating tactics of intimidation." The statement continues:

Marcel Rivas Falon, director general of migration in Bolivia, threatened that the PI delegation would "suffer the consequences" at the hands of his agency. Bolivian Interior Minister Arturo Murillo accused the PI delegation of being "agitators" that would be "put on a plane or behind bars," adding ominously: "We know who you are and where you are."

Despite pressure from the de facto government, the delegation remained steadfast.

"I joined the PI observation mission out of concern over possible electoral fraud or another coup d'état," said Maciej Konieczny of Poland. "The authorities tried to intimidate us, and launched a campaign of lies and deception."

"But our worst fears did not materialize on Election Day," Konieczny added. "Instead, we witnessed a true celebration of democracy."

Tessy Schlosser, another member of the PI delegation, noted that "we are witnessing the mass expression of popular sovereignty, a fundamental element of the Bolivian constitution."

"At every polling station on our route," Schlosser added, "we observed thousands of voters peacefully exercise their democratic rights."

PI described Arce's democratic triumph as a "testament to the mobilization of a powerful popular movement—not only on Election Day."

"Long before the polls opened on Sunday," the statement reads, "a sustained campaign of strikes and roadblocks, orchestrated by trade unions across the country, were critical to securing the [right to] vote."

Gerardo Pisarello, a member of PI's delegation from Spain, stated that "Bolivia has sent a resounding message—to the region of Latin America, to the United States, to Europe—that it is possible to repair our democracy."

"Following a year of repression, reprisals, and racist violence, the people of Bolivia have restored their democracy and returned the Movement Toward Socialism (MAS) to the presidency," PI said.

Sunday's election result is a rebuke to the coup-makers and right-wingers, to the Washington establishment and Western opponents of leftist governments, to the pundits and thinkers who equate democracy with liberal capitalism and excoriate deviations from that orthodoxy as populist hysteria.

Gude borrowed a phrase deployed last November by centrist commentator Yascha Mounk—who celebrated the violent overthrow of Morales' government by far-right forces as a positive development—using Mounk's own words against him in order to expose elite contempt for popular rule and redistributive policies.

"MAS's crushing victory," Gude wrote, "is 'one of the few big victories democracy has won in recent years.'"

David Adler, general coordinator of PI and a member of the delegation, called the election in Bolivia a "watershed moment" that marks the end of "the era of authoritarian impunity."

"A new wave of popular power is now rising to restore democracy and reclaim the institutions of the state," Adler added, "taking inspiration from the people of Bolivia in their heroic struggle this year."