American voters in Paris get ready for US presidential election 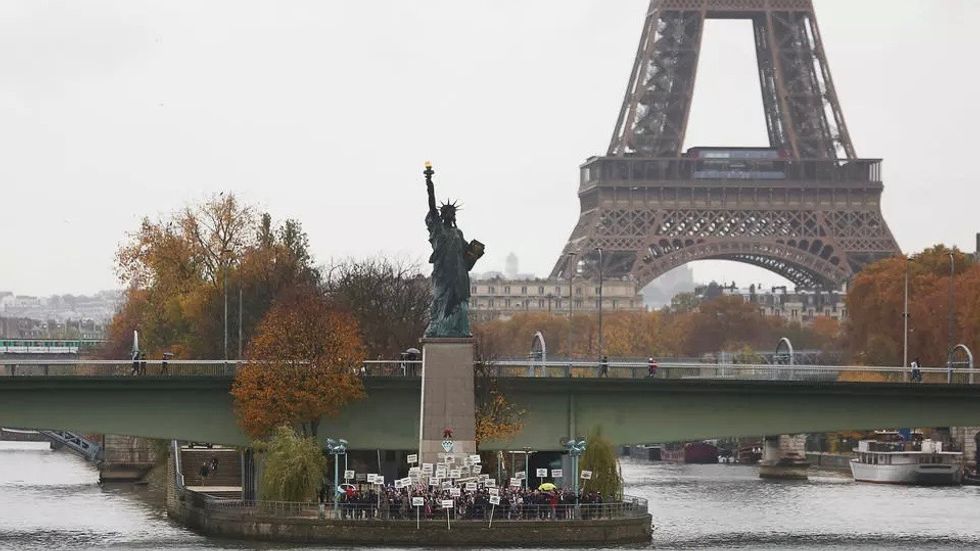 In this November 11, 2018 file photo, members of an association of dual citizens of France and the United States demonstrate against US legislation at the base of the Paris Statue of Liberty on the Iles aux Cygnes, an artificial island in the Seine river, in Paris, France. © Zakaria Abdelkafi, AFP

Politically active Americans who live in France have been registering voters, making media appearances, donating to candidates and venting to their friends in the run-up to the November 3 presidential election.

In the 2020 election between President Donald Trump and Democratic nominee Joe Biden, votes from Americans abroad could make a difference, especially in swing states like Pennsylvania and Wisconsin where Trump won in 2016 by slim margins of 44,292 and 22,748 votes, respectively, over Democrat Hillary Clinton.

FRANCE 24 spoke with four Paris-region expatriates about their activism and perspectives on the 2020 campaign.

Didier Moutou is an IT director at a Paris start-up. He moved to France 11 years ago from Massachusetts, where he helped register voters during the 2008 presidential campaign between then senators Barack Obama and John McCain.

Moutou made phone calls to help Americans living in France register to vote in 2016, and he’s now the GOTV (Get Out the Vote) officer for the Paris chapter of Democrats Abroad. In September and into October, the organisation hosted pop-up events to help Americans register and vote in front of Shakespeare and Company, the cozy anglophone bookstore across the Seine from Notre-Dame Cathedral, and at the American University in Paris near the Eiffel Tower.

Moutou said the events were nonpartisan: voters of any persuasion could receive help registering, and supporters of either major-party presidential candidate could get help correctly filling out ballots.

“We didn’t look at their ballots unless we needed to,” Moutou told FRANCE 24.

The 52-year-old said that Democrats Abroad don’t yet have a count of all the voters it helped, but from his perspective, the number was “really impressive and surprising”.

“This is something else,” he said. “I think people have awakened to what’s at stake.”

“I’m passionate about the US,” the Massachusetts voter said. “It’s very important that every citizen gets their vote counted.”

‘On our own time’

Randy Yaloz lives and practices law in Paris’s 7th arrondissement (district) and serves as president of Republicans Overseas France. He said he was participating Wednesday in a Madrid-based virtual debate on the US election, one of more than several debates he’s joined in the past two weeks.

The New York City native, who moved to France 25 years ago, said he also debated before lawmakers who are members of the French National Assembly’s groupe d’amitié France-États-Unis (France-American group of friendship) on October 20.

The appearances help Yaloz advance his view that Trump is “the man who can make things work” and can “bring the nation together” in the next four years.

“People undervalue the work he’s been doing,” Yaloz told FRANCE 24, mentioning the Trump administration’s work to achieve peace between Israel and its neighbours and the Centers for Disease Control (CDC) order to temporarily halt evictions of residential tenants to fight the spread of Covid-19.

Republicans Overseas France has also sent mailings, emails, and Facebook messages to Americans in the country, Yaloz said. He estimated that the organisation has received a few dozen inquiries from voters or potential voters “over the last few months”.

Yaloz said that next week’s election “is one of the most important” he’s ever voted in, and that his conviction that Trump is the better candidate drives his work.

“We’re volunteers,” Yaloz said. “We’re doing this on our own time.”

John Lowe, a member of Republicans Overseas and a lawyer with offices in Paris and New York, said he has done TV and radio interviews during the general election campaign.

“Not a whole lot more we can do around here,” Lowe, a sexagenarian, told FRANCE 24, saying he guesses that most Americans living in Paris are left-of-centre.

“I sort of hope they stay home,” he said, meaning not cast ballots.

He said he’s taken note of national and some state polls that favour Biden, but has “difficulty understanding why Americans would not vote for Donald Trump”.

Lowe said he understands that some voters object to the words Trump uses when he speaks and tweets. But for him, “actions speak louder than words”, and cites as reasons why he supports him the president’s decisions to exit the Iran nuclear deal and help broker the normalistation of relations between Israel and three Arab nations, as well as low unemployment rates for Black and Hispanic or Latino Americans in 2018 and 2019.

“Why are the words taking precedence?” Lowe asked.

Despite the polls, Lowe said he had an “optimistic heart”, and counted the Senate’s vote to confirm Amy Coney Barrett’s appointment to the Supreme Court – the third confirmation of a Trump appointee – as a development that could help the incumbent win a second term.

Lowe also said he was glad to send his ballot to Ohio, his last US state of residence. Trump won Ohio by 446,841 votes, an 8.1 percent margin of victory, in 2016, but a recent average of six polls puts the president ahead of his challenger by just 0.6 percent.

“My vote matters there,” Lowe said.

Kelly Harkin, a 29-year-old who works for luxury shoe and leather goods maker Christian Louboutin, moved to Paris a week and a half before Trump was elected in 2016.

“I very much existed in the East Coast echo chamber” that had concluded Hillary Clinton would win the race, she told FRANCE 24.

She said she remembers being on the phone with her younger sister, a first-time voter in Rhode Island, and crying because she believed her sibling’s vote would help elect the first woman president in US history.

“I felt all this momentum,” Harkin said.

In the days after Trump’s victory, she felt “completely dejected,” she said. “I was really in a state of disbelief.”

Harkin sent her absentee ballot to the US on the same day she received it. She donated to a fund for Democratic congressional candidates earlier this year, and to another to support racial justice activism in the wake of George Floyd’s death.

She has conversations “all the time” with friends about political developments that anger her, like Trump’s nomination of Barrett to the Supreme Court.

“I vent, get the rage out, get the perspective I’m missing,” she said.

Harkin said she does not foresee getting a full night’s sleep on election night, about four years after turning in at midnight on November 9, 2016.