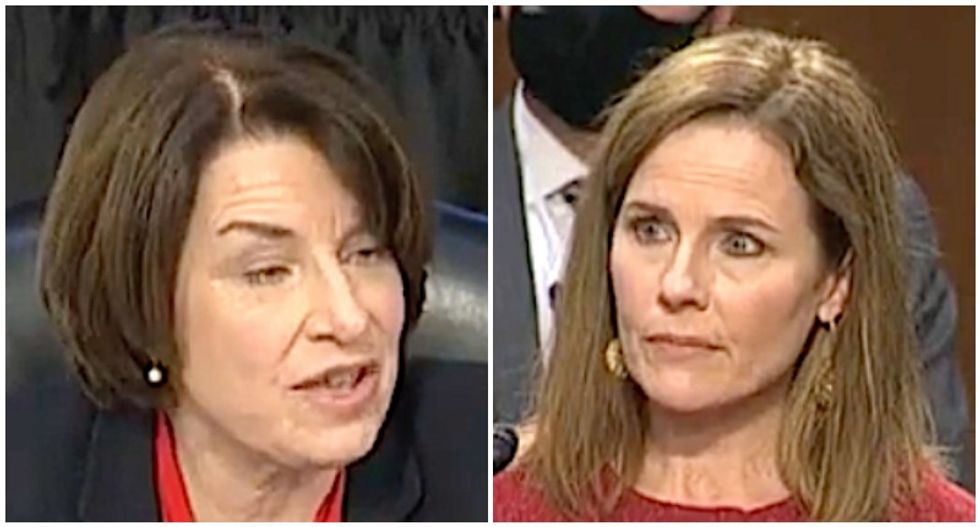 During Amy Coney Barrett's confirmation hearing this Tuesday, Senator Amy Klobuchar (D-MN) question the SCOTUS nominee on how she defines "precedent" -- or in regards to Roe vs Wade, "super-precedent."

"How would you define super-precedent," Barrett asked Klobuchar, who lobbed the question back to Barrett, saying, "I'm asking you."

"Okay -- well, people use 'super-precedent' differently," Barrett said. "The way that it's used in the scholarship and the way I was using it in the article that you're reading from was to define cases that are so well-settled that no political actors and no people seriously push for their overruling, and I'm answering a lot of questions about Roe, which I think indicates Roe doesn't fall in that category, and scholars across the spectrum say that doesn't mean that Roe should be overruled, but descriptively it does mean that it's not a case that everyone has accepted and doesn't call for its overruling."

Klobuchar then asked if Barrett considers a case such as Brown vs Board of Education as super-precedent, why wouldn't she apply the same standard to Roe vs Wade.