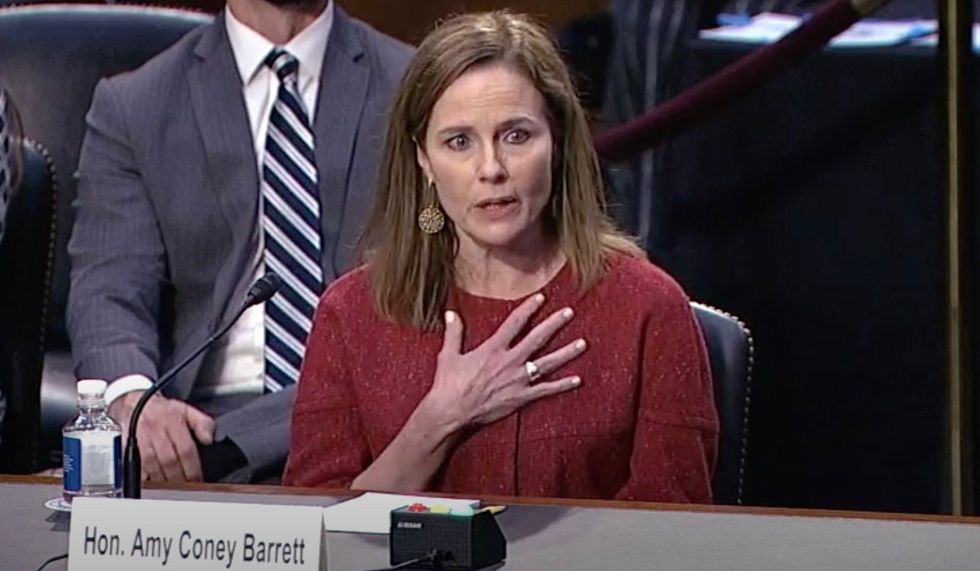 Amy Coney Barrett had a challenging day before Senate Democrats. She offended a great many people during her Supreme Court nomination hearing Tuesday when she used the term "sexual preference," instead of "sexual orientation," forcing a rare  apology from a SCOTUS nominee later in the day.

Judge Barrett claimed she would never discriminate for any reason, which is probably false as she has already in her life outside the courts, but it was one set of questions from Senator Cory Booker (D-NJ) that seemed to trip up Judge Barrett.

"Can a hairdresser refuse to serve an interracial couple's wedding, because they disapprove of interracial marriages?" Sen. Booker asked.

"Well, Loving v. Virginia follows directly from Brown, and it makes unconstitutional any attempt to prohibit or for forbid interracial marriage," Barrett replied.

"Could they refuse to serve a black couple's wedding?" Booker asked.

"Could a baker or a florist refuse to – Title VII prohibits any sort of discrimination on the basis of race by places of public accommodation," Barrett said.

But Sen. Booker didn't ask about "a baker or a florist," he asked about a hairdresser.

Coincidentally, the anti-LGBTQ hate group Judge Barrett has ties to has clients who are bakers and florists, and two of its top cases involve a baker and a florist. Not a hairdresser.

Booker continued, asking about an interfaith couple, and that's when Barrett put the brakes on.

"Well, Senator, I feel like you're taking me down a road of hypotheticals that is going to get me into trouble here because as you know I can't opine on how cases would be resolved, and I've said that whether they're easy questions or hard questions. I can't do that," Barrett insisted.

"So I'm not the lawyer that you are," Booker replied graciously. (He is in fact a highly-regarded attorney.) "But you seem to honor the precedents that are enough to protect discrimination against African Americans, interracial couples, but you stop on saying that unequivocally about people stopping on religious discrimination against a Muslim couple or interfaith wedding?"