Amy Coney Barrett's threat to Social Security and Medicare is 'what right-wing extremism is all about': Progressive senator 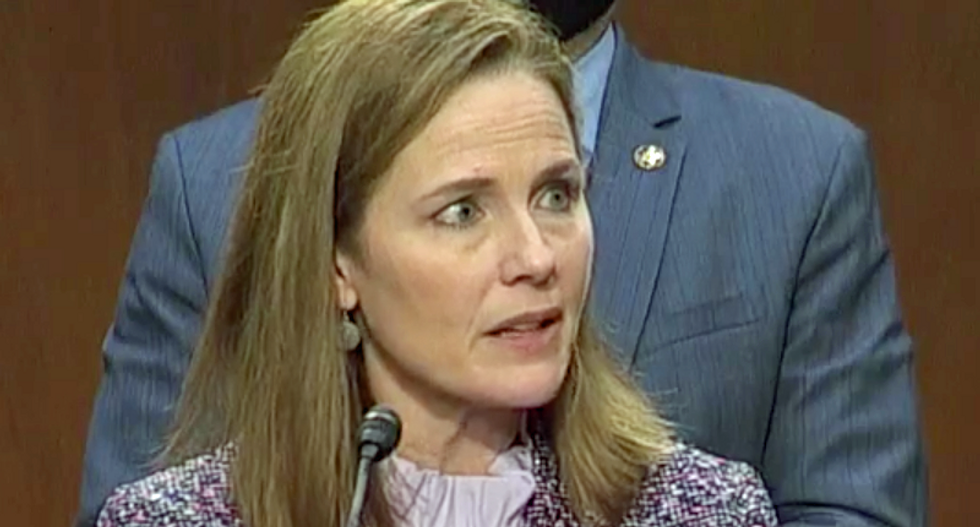 In keeping with her evasive answers on other key issues—from voting rights to reproductive rights to climate change—President Donald Trump's Supreme Court nominee Amy Coney Barrett on Wednesday refused to say whether she believes Social Security and Medicare are constitutional, prompting progressive advocacy groups and lawmakers to warn the judge's confirmation could pose an existential threat to the programs.

"Social Security has been law of the land for 85 years, Medicare for 55," Sen. Bernie Sanders (I-Vt.) said in response to Barrett's comments. "Tens of millions are dependent upon these programs for retirement security and healthcare. And Judge Barrett doesn't know if they are constitutional. Really? That's what right-wing extremism is all about."

"This is Republicans' end game: confirm conservative judges who will undermine overwhelmingly popular programs like Social Security and Medicare and rip away healthcare from millions."

Questioned by Sen. Dianne Feinstein (D-Calif.) during Wednesday's Senate Judiciary Committee hearing, Barrett would not say whether she agrees with a right-wing scholar who has argued that Medicare and Social Security are unconstitutional because they exceed the spending powers of Congress. The Supreme Court deemed the Social Security Act of 1935 constitutional in a series of rulings in 1937.

"I'm not familiar with that article," Barrett said, referring to a 2015 essay by University of San Diego School of Law professor Mike Rappaport, "so I don't know what reasoning he advances."

When pressed further on whether she agrees with so-called originalists who argue that Medicare is unconstitutional, Barrett said she "can't answer that question in the abstract... I also don't know what the arguments would be, though I assume Professor Rappaport lays out a case. But it's not a question I've ever considered before."

"It's hard for me to believe that that's a real question," Feinstein responded, "because I think the Medicare program is really sacrosanct in this country."

The senator then moved on to a different topic.

Progressive advocacy group Social Security Works warned that Barrett's remarks show she represents "a threat to our earned benefits," a sentiment echoed by Democratic members of Congress following the final day of questioning by the Senate Judiciary Committee.

Sen. Elizabeth Warren (D-Mass.) said Barrett's record "makes it clear that she'll vote to rip away healthcare. In fact, she won't even say that programs like Medicare are constitutional."

"Seniors—and all Americans—should be worried about Barrett tipping the scales of the court," Warren continued.

Adding to lawmakers' concerns is the fact that Barrett was nominated by a president who has repeatedly threatened to cut Social Security and Medicare if reelected in November.

"This is exactly what we would expect from a justice handpicked by Trump and McConnell: A corporate judge who will help them gut Social Security and Medicare," tweeted Sen. Sherrod Brown (D-Ohio).

Sen. Ron Wyden (D-Ore.) added that "this is Republicans' end game: confirm conservative judges who will undermine overwhelmingly popular programs like Social Security and Medicare and rip away healthcare from millions."

"Make no mistake: your earned benefits are on the chopping block," Wyden said.