As GDP data shows economy still in a deep hole, Trump denounced for 'trying to mislead the public by claiming an economic miracle' 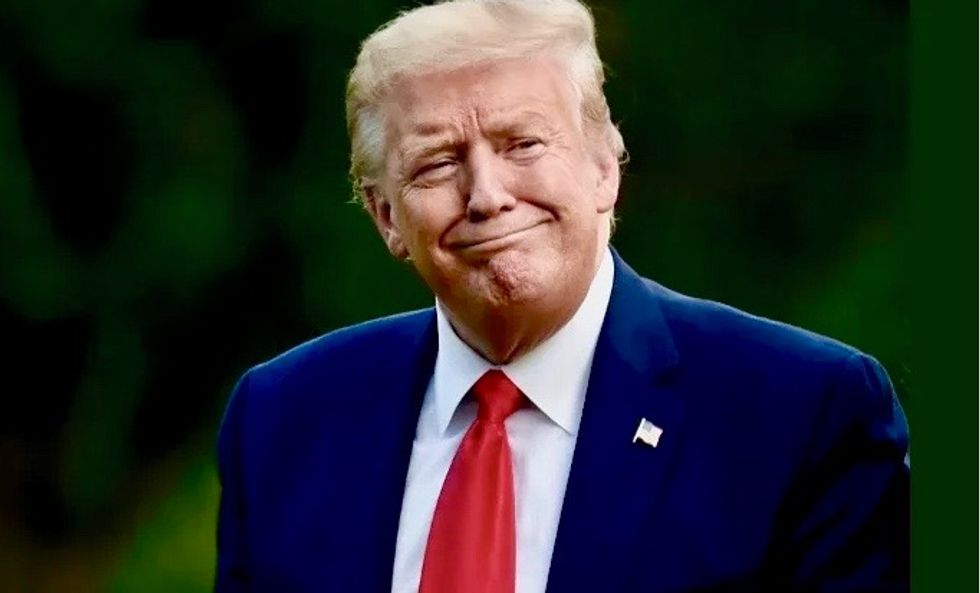 As President Donald Trump on Thursday predictably wasted no time celebrating new figures showing a record-breaking GDP surge in the third quarter and working the data into his last-minute campaign pitch, analysts and lawmakers pushed back by placing the numbers into the broader context of an economy coming off the worst quarter in U.S. history and continuing to shed jobs at an unprecedented rate.

Just after the Bureau of Economic Analysis released its anticipated report estimating that the U.S. economy grew a record 7.4% during the three-month period ending in September—a 33.1% annualized growth rate—Trump fired off a tweet hailing the "Biggest and Best" GDP jump "in the History of our Country."

"Almost one-third of adult Americans expect to lose their home to eviction or foreclosure and almost one-third say they are having difficulty paying for usual household expenses. Those Americans are not fooled when the president says he has worked magic with the economy."

"Next year will be FANTASTIC!!! However, Sleepy Joe Biden and his proposed record setting tax increase, would kill it all," claimed the president, whose reelection campaign was already running Facebook ads on the GDP figures ahead of their official release. "So glad this great GDP number came out before November 3rd."

Trump neglected to mention that even with the historic third-quarter rise in GDP, the economy remains in significantly worse shape than it was before the pandemic and has in recent weeks been trending in the wrong direction as coronavirus infection numbers soar across the nation.

"This morning's GDP report reveals a $775 billion (-3.5%) gap even after the 33% annual growth rate," tweeted economist Jared Bernstein, a senior fellow at the Center on Budget and Policy Priorities. "That's close to the worst gap of the last downturn and represents a loss of $6,000 per American household. It's also old news, representing growth earlier in the year."

Dean Baker, senior economist at the Center for Economic and Policy Research, echoed Bernstein's assessment, writing in a blog post Thursday morning that "while the record growth in the third quarter is good to see, this is largely history at this point."

"The strongest parts of the picture represented pent-up demand and a bounce back from a shut-down economy in the second quarter," Baker pointed out. "As we move into the fourth quarter, most of the factors that drove growth in the third quarter are no longer there. We have already seen most of the pent-up spending, and with the ending of the unemployment insurance supplements, tens of millions of unemployed workers will have far less to spend."

Democratic members of Congress also weighed in on the new GDP data, denouncing Trump's portrayal of the numbers as a highly misleading and desperate effort to change the narrative on the economy in the final days of the 2020 presidential campaign.

"We are nowhere near making up for the historic loss in economic output that we suffered a few months ago and to get there we would need to see a number that is at least 20 percentage points higher," Rep. Don Beyer (D-Va.) said in a statement. "President Trump knows this—it is being widely reported—but he is trying to mislead the public by claiming an economic miracle."

"Americans can believe what he says or they can believe their own eyes," Beyer added. "Millions are unemployed—they know the economy is not booming. Almost one-third of adult Americans expect to lose their home to eviction or foreclosure and almost one-third say they are having difficulty paying for usual household expenses. More than one-third say they are experiencing anxiety or depression. Those Americans are not fooled when the president says he has worked magic with the economy."

The new GDP figures came as the Labor Department reported that an additional 1.1 million Americans filed for unemployment benefits last week, the 32nd consecutive week initial jobless claims were higher than the worst week of the Great Recession.

"Most states provide 26 weeks (six months) of regular [unemployment] benefits, and this crisis has gone on much longer than that," Heidi Shierholz, senior economist at the Economic Policy Institute, wrote in a blog post Thursday. "That means many workers are exhausting their regular state UI benefits."

In a statement, Senate Minority Leader Chuck Schumer (D-N.Y.) slammed his Republican counterparts for blocking additional coronavirus relief even in the face of dire economic indicators and widespread suffering.

"Had Republicans joined us in supporting a second robust and bold relief package, the second half of 2020's recovery would be much stronger than it is anticipated to be," Schumer said, adding that the new GDP numbers "mask the reality that 23 million Americans remain on unemployment and tens of thousands of small businesses have already gone under."

"Our nation still has a long way to go before we overcome this public health crisis and our economy fully recovers," added Schumer. "Much more needs to be done."