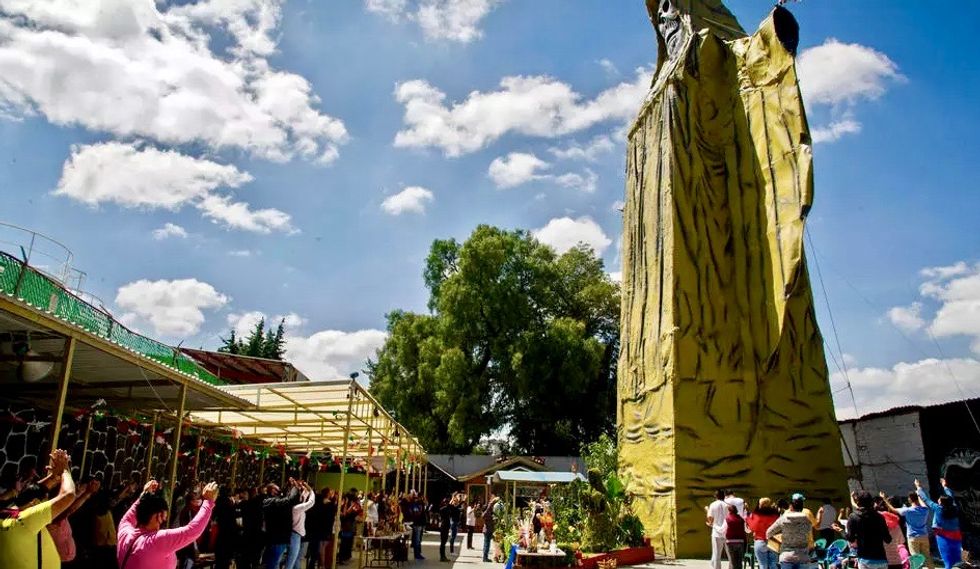 Their arms raised towards the sky, worshippers of Mexico's "saint" of death pray before a giant cloaked skeleton asking for protection from the coronavirus and its devastating economic fallout.

The Grim Reaper-like figure, whose devotees include drug cartel members as well as ordinary Mexicans, has been rejected by the Roman Catholic Church as blasphemous.

But with tens of thousands of Mexican lives lost to Covid-19, there is no shortage of followers of "Santa Muerte."

"With the pandemic, more devotees want to come to ask for health and protection," said 30-year-old Cristel Legaria, whose late mother erected the 22-meter (72-foot) fiberglass statue in Tultitlan near the capital.

Wearing a golden robe, the skeleton stands with its bony arms spread out against the blue sky, like a statue of Jesus.

Historians trace Santa Muerte back to the 18th century, when indigenous people turned images of the Grim Reaper brought by Spanish conquistadores into an icon, prompting the Church to destroy chapels devoted to the folk saint.

After many decades underground, the practise emerged from the shadows in the mid-20th century, particularly in the capital, as Mexicans arrived from the impoverished countryside.

The number of followers grew in 2001, when a woman named Enriqueta "Dona Queta" Romero displayed her Santa Muerte figure in Mexico City's rough neighborhood of Tepito.

Hundreds now visit the shrine on the first day of each month to worship Santa Muerte.

"I came to thank her for everything that she's given us this year, which has not been easy due to the pandemic," said 34-year-old stylist Suri Salas, returning for the first time after months of confinement.

"Fortunately, she's always there to support us," said Salas.

The faithful -- some shuffling on their knees -- arrived with effigies of Santa Muerte, while others offered flowers, sweets and liquor.

"Since the pandemic began I've never closed," said Romero, who welcomes visitors from as far afield as the United States and Europe after word of the saint of death spread.

Some have tattoos of Santa Muerte on their neck or chest and indoctrinate their children.

"She helps you when you're on the razor's edge, facing insecurity, economic troubles or -- like now -- health problems," said Alfonso Hernandez, a journalist and official chronicler in crime-plagued Tepito.

The worship of Santa Muerte is "an adaptation of a harsh world," but heresy for the Catholic Church, said Bernardo Barranco, a sociologist who specializes in religions.

"It's not a religion. It's a cult. You can be Catholic or Evangelical and be a follower," he said.

Some devotees are also believers in the Virgin of Guadalupe, patron saint of Mexico, the world's second-biggest Catholic country.

In 2016, during a visit to Mexico, Pope Francis alluded to the veneration of Santa Muerte when he said he was concerned about people who worship "macabre symbols."

But that does not seem to bother Rodrigo Oliva, who travels 70 kilometers (44 miles) from the capital to Tultitlan, where face masks, temperature checks and social distancing are compulsory.

The 28-year-old photographer follows the Afro-Cuban religion Palo Monte, but his temple closed due to the epidemic so he prays to Santa Muerte.

With Covid-19 "there are more people who have taken an interest in a cult," he said.

"We pray to her so she protects us, but that does not make us immune," he added.

With around 84,000 deaths, Mexico has the world's fourth-highest coronavirus toll, and many have lost a relative, friend or neighbor.

"The only thing I ask of my saint is to give me strength, health and harmony. Nothing else matters if you don't have good health," said 23-year-old shoeshiner Jonathan Flores.