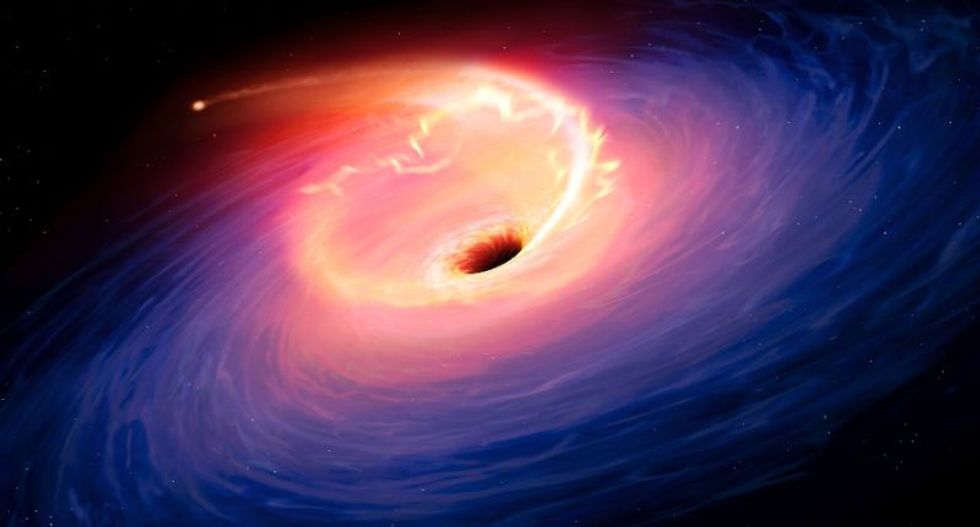 A trio of scientists were awarded the Nobel Physics Prize on Tuesday for their research into black holes, some of the most mysterious objects in the universe that gobble stars like specks of dust.

So powerful they bend the laws of nature, not even Albert Einstein, the father of general relativity, was convinced they could exist.

A black hole is a celestial object that compresses a huge mass into an extremely small space. Their gravitational pull is so strong nothing can escape their maw, not even light.

This has made these exotic entities difficult to spot. But scientists now know a lot about black holes from the impact they have on their surroundings.

There are two kinds.

The first are garden-variety black holes that form when the centre of a very big star collapses in on itself, creating a supernova.

These can be up to 20 times more massive than the Sun, but are tiny in space.

Trying to see the one closest to Earth would be like looking for a human cell on the surface of the moon.

In contrast, so-called supermassive black holes -- such as the one sitting at the centre of the Milky Way for which two of Tuesday's laureates were awarded prizes -- are at least a million times bigger than the Sun.

Last month, teams of scientists from the US and Europe detected for the first time a so-called "intermediate mass" black hole with 142 times the mass of the Sun. It was formed, they determined, from the merger of two smaller black holes.

When he released it in November 1915, Einstein's general theory of relativity upended all previously held concepts of space and time.

It described how everything, from the tiniest atom to the largest supernova, is held in the grip of gravity.

Since gravity is proportionate to mass, an extremely heavy entity has such a strong gravitational pull that it can bend space and slow time.

According to Einstein's theory, an extremely heavy mass, such as a black hole, could stop time altogether.

Yet Einstein himself was not convinced that black holes existed.

It took British physicist Roger Penrose -- honoured with the Nobel on Tuesday -- to show that general relativity could result in these enormous, all-devouring objects.

Perhaps the most famous black hole of all sits at the centre of our galaxy. At more than four million times the mass of our Sun, Sagittarius A* is a monster object responsible for the characteristic swirl of the stars in the Milky Way.

But, since black holes devour light and are therefore invisible, for decades it was impossible to spot.

In the early 1990s, physicists Reinhard Genzel and Andrea Ghez each led a team of researchers using the latest technology to gaze at the heart of our galaxy.

But even with the world's largest telescopes the teams were limited in what they could see by distortion caused by Earth's atmosphere.

The same effect that makes stars twinkle in the night sky was ruining the clarity of images taken of the Milky Way.

They used their new methods to track 30 of the brightest stars near the centre of the Milky Way.

The speed at which the stars were moving allowed both teams to conclude that it was a supermassive black hole driving the galactic swirl.