'Brazen attempt at vote buying': Trump bashed for requiring federal food aid to include letters from him taking credit 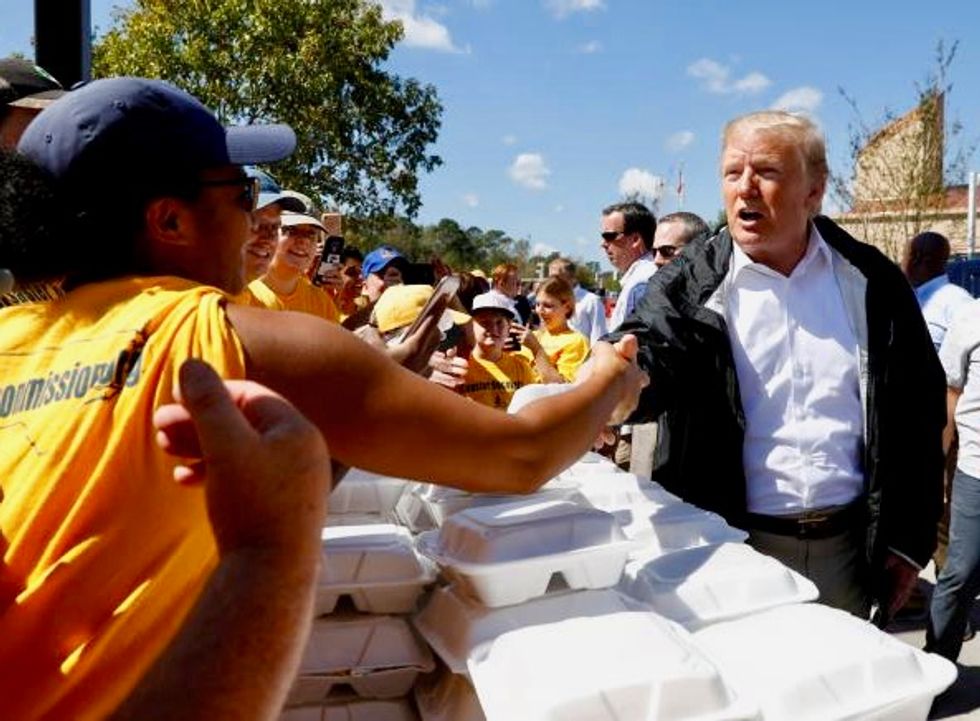 The U.S. Dept. of Agriculture is spending billions of taxpayer dollars to buy fresh food from America's farmers to give to needy families across the country, because of the coronavirus pandemic. But the Trump administration is now requiring those federal food aid boxes include a letter, signed by President Donald Trump, directly taking credit for helping to feed America's families.

Food bank operators and non-profit executives and experts are furious.

“In my 30 years of doing this work, I've never seen something this egregious,” Lisa Hamler-Fugitt, executive director of the Ohio Association of Food Banks, tells Politico. "These are federally purchased boxes.”

Politico calls it "the latest example of Trump using the levers of government and taxpayer dollars for self-promotion as he runs for re-election."

"These guys should be handing out food and instead they're talking to campaign attorneys because of these damn letters,” says Eric Kessler, founder of Arabella Advisors, a philanthropy consulting firm. Politico describes him as a "longtime player in Democratic politics."

"It's a brazen attempt at vote buying targeted at the neediest," Kessler adds.

The letters are not subtle.

“As President, safeguarding the health and well-being of our citizens is one of my highest priorities,” the letter, in English and Spanish, reads. “As part of our response to coronavirus, I prioritized sending nutritious food from our farmers to families in need throughout America.”

They are signed in Trump's famous big black marker scrawl.

The White House – not the Trump campaign – this week is promoting the program, and very clearly giving President Trump all the credit, on social media.

The $1 billion are taxpayer funds.

Some food banks are complaining they have had to consult attorneys to ensure including the mandated letters does not break the law or jeopardize their non-profit status.

“We are a nonpartisan organization,” Greg Trotter, a spokesman for the Greater Chicago Food Depository told Politico. “While the content of the letter is not overtly political, we think it’s inappropriate to include a letter from any political candidate just weeks from an election.”

The letters first came in mid-summer, in a program heralded by Ivanka Trump. But back then they were not mandatory – not a requirement of participation.

Democrats say the letters are unlawful.

One major Oregon food bank has decided to stop participating in the federal program, at least in part because of Trump's letter.

"There "are real questions as to whether food assistance organizations can ethically distribute such a message with an election looming in mere weeks,” Susannah Morgan wrote in a statement.