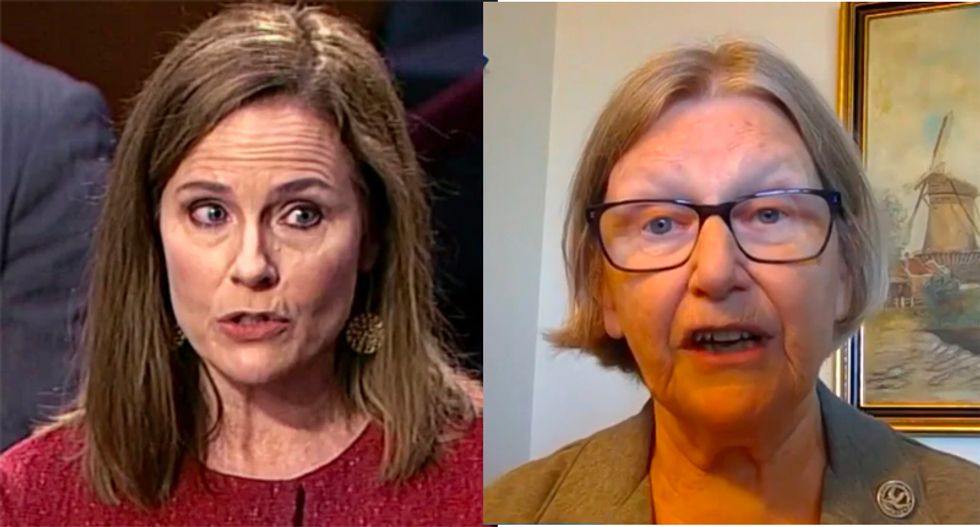 On Saturday's edition of MSNBC's "Weekends," Sister Simone Campbell, executive director of the Catholic lobbying group NETWORK, explained why her group is calling on Republican senators to reject Amy Coney Barrett's nomination to the Supreme Court.

"Let me ask you about NETWORK, which launched the ad campaign calling on Senators Graham, Ernst, and Tillis to oppose the judge's nomination, despite her strong faith," said anchor Alex Witt. "What are your biggest concerns about her convictions and faith?"

"She is a strong Catholic. That's lovely. I'm a lawyer and I'm worried about her decisions," said Campbell. "The fact is, Judge Barrett has lived in an ivory tower bubble most of her career. She doesn't know the reality of struggling people. And her approach to the Constitution is to say, we have to go back to 1789 and how they thought then, without acknowledging the changes that have occurred, the growth in civil rights, the growth in the fact that women have the vote, the growth in the fact that we as a nation have discovered a deeper sense of the common good. And so I worry about what's going to happen to voting rights. I worry about what's going to happen to the Affordable Care Act. I worry about how she sees the critical social issues of our time."

"No, because one of the issues that is really ripe right now in our conversation is about religious liberty," said Campbell. "Right now, the way the law stands, everybody can exercise their faith when it comes to the issue of abortion. Now I'm a Catholic sister, I'm not going to get pregnant. That's not an issue for me. What I know is that women, Catholic women, have the capacity to make their own choice. I don't think it's right in our diverse nation for me to force my choice, my faith onto others."

"Let's support the formation of conscience and the choices made by women, but let's make sure pregnant women have the supports they need," added Campbell. "We know in Democratic administrations that the abortion rate goes down faster than Republican administrations, because Democrats support pregnant women. That's how I care for the unborn. Let's ensure women have access to health care, nutrition, housing. All the basics they need to carry a baby to term. That matters."