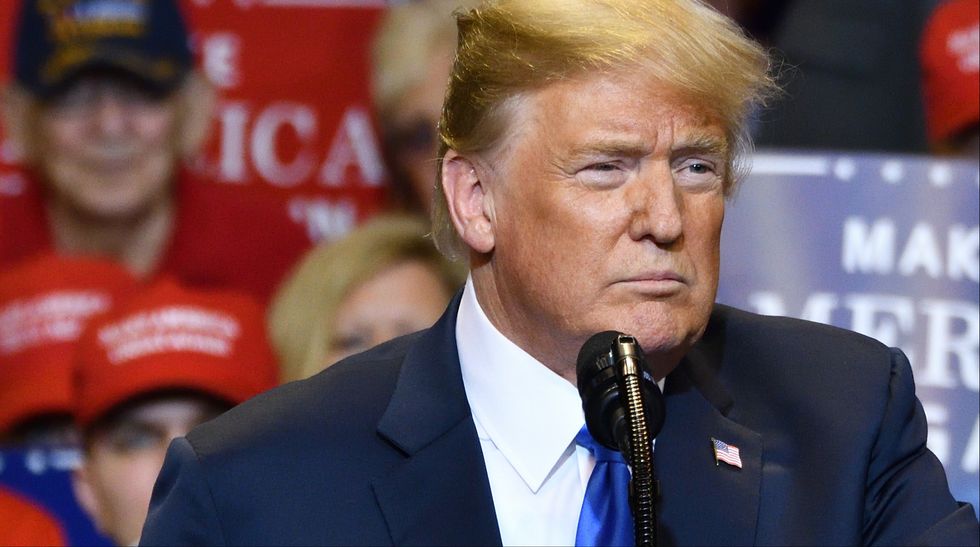 The far-right QAnon conspiracy cult not only opposes abortion — it also opposes the use of any type of fetal tissue for medical research. But in Vice, journalist Anna Merlan notes a major contradiction: President Donald Trump, who QAnon idolizes, was recently treated with a drug that was "developed using a stem cell line made from aborted fetal tissue."

When Trump was hospitalized at Walter Reed Military Medical Center in Bethesda, Maryland after testing positive for COVID-19, he was treated with an antibody cocktail from the company Regeneron — and that cocktail, Merlan notes, "was developed using a fetal tissue cell line from the 1980s."

QAnon aren't the only anti-abortion extremists on the far right who oppose the use of fetal tissue in medical research. But QAnon carries it much further, claiming that an international cabal of pedophiles and Satanists are making use of fetal tissue. QAnon believes that the cabal/Satanic child sex ring has infiltrated the federal government in the United States and that Trump was placed in the White House to combat the cabal. According to QAnon, an anonymous figure named "Q" is giving members updates on Trump's battle.

The antibody cocktail that Trump received, Merlan points out, "manages to slot with almost painful neatness into an ongoing storyline in the right-wing conspiracy verse: that powerful Democratic elites extract the lifeblood or some other vital force from children and feed on it. It's a trope with roots in the anti-Semitic medieval blood libel, and has recurred in various forms for hundreds of years."

"Among QAnon fans," Merlan notes, "that substance is commonly claimed to be 'adrenochrome,' and the claim, more or less, is that the Satanic Democrat Illuminati elites extract it from children being tortured and killed and then inject it to maintain their youthful vigor. Adrenochrome is a chemical compound that's used mainly to slow blood clotting; its mythology as a supposed intoxicating drug is almost completely derived from fiction. It's not, in any circumstances, necessary or possible to harvest it from tortured children."

Merlan observes that there is a major "irony" in the fact that Trump, QAnon's idol, was treated with that antibody cocktail when the cult opposes using any type of fetal tissue for scientific research. And she points out that Trump's supporters, including QAnon extremists, have been looking for ways to rationalize the use of that antibody cocktail when he was hospitalized.

"It's virtually certain that in the coming days, the sentiments around Trump's antibody cocktail will coalesce, and these divergent, competing points of view will be absorbed into a more dominant narrative — most likely, one that urges trust in Trump and in what his followers so fondly call 'the Plan,'" Merlan writes. "By Tuesday, in fact, there were signs that the controversy, such as it was, was simply being allowed to die away, and that the details of how Trump was 'cured' were less relevant than the fact that he'd returned to public life…. The future of QAnon, after all — a movement based on lionizing one man, putting him into the role of savior, leader of mankind, and, of course, tireless, extremely healthy strongman — depends on believing that to the bitter end."

Georgia Gov. Brian Kemp, a Republican, keeps mentioning the failed campaign to vaccinate Americans against the AIDS virus as an example of the pitfalls of healthcare mandates.

Except the AIDS vaccine doesn't exist. And there sure wasn't a failed campaign to mandate it.