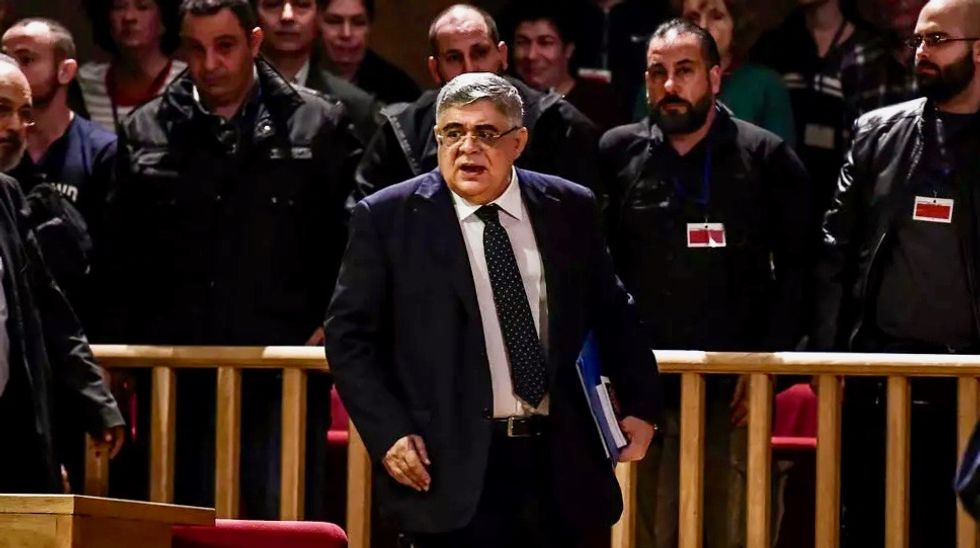 The founder of Greece's neo-Nazi party Golden Dawn Nikos Michaloliakos, who was handed a criminal conviction in a landmark five-year trial verdict on Wednesday, is a dictator's disciple, Hitler admirer, and one of the longest-running party leaders in the country.

The 62-year-old mathematician and Holocaust denier rode a wave of popular anger over austerity to steer his once-fringe party to third place in 2015 elections.

He now faces a prison sentence of up to 15 years after a court on Wednesday said he had ran Golden Dawn as a criminal organization that preyed on political opponents and migrants.

Since the trial began in 2015, prosecutors had sought to prove that the openly xenophobic and anti-Semitic group operated under a military-style leadership that encouraged intimidation beatings -- and even killings.

The probe began after a party militant murdered anti-fascist rapper Pavlos Fyssas in 2013.

A disgraced former officer cadet and devotee of Greek dictator George Papadopoulos, Michaloliakos spent time in prison in the late 1970s in connection to a spate of bombing attacks.

Making his case to court in November, he said the charges were "the result of a political plot" to stem his party's popularity.

"There is no criminal organization... I gave no order to murder. It's all a pack of lies," he told the court.

When prosecutors questioned him on his party's ideology and operations, Michaloliakos denied that Golden Dawn operated combat squads. The party's adherence to military-style discipline was "a figure of speech", he insisted.

"I did not exhort anyone to violence," he said, noting that even the French national anthem "talks about the blood of enemies spilling in the streets".

According to the prosecutors, Golden Dawn set up militia of men dressed in black who patrolled the streets.

Wednesday's sentencing was also for the beating of Egyptian fishermen in 2012 and communist trade unionists in 2013.

Initially handpicked by ex-dictator Papadopoulos to lead the youth of far-right group EPEN after the junta fell, Nikos Michaloliakos founded Golden Dawn in the mid-1980s, making him one of the longest-serving party leaders in Greece.

Michaloliakos' first elected post was as an Athens municipal councillor in 2010, where he attended sessions with bodyguards and was filmed taunting a left-wing opponent with fascist salutes.

At the time of its inception and for years thereafter, Golden Dawn glorified Adolf Hitler and the warrior ethos of Nazi Germany in its party publications.

One of the party's older texts called Hitler a "visionary of new Europe".

"Faith in the words of the Fuehrer, and faith in victory, grows in our hearts. The fight goes on, the future is ours," the text read.

This rhetoric was later toned down as the party adjusted its message to better suit Greek voter concerns with austerity and illegal immigration.

Even so, in a May 2012 interview Michaloliakos effectively denied the Holocaust, saying: "There were no crematoria, it's a lie. Or gas chambers."

In 2013, he mocked black Greek NBA star Giannis Antetokounmpo, likening him to a "chimpanzee".

After a wave of arrests in 2013, a search of party members' homes uncovered firearms and other weapons, as well as Nazi and fascist memorabilia.

Much of that came from the home of deputy leader Christos Pappas, where police found swastika flags, two German army helmets and bottles stamped with images of Italian dictator Benito Mussolini.

Formerly on the fringe of Greek politics, Golden Dawn went from 19,000 votes a few years ago to over 426,000 in June 2012 after pledging to "scour the country" clean of illegal immigrants.

Many of its voters were police officers.

Michaloliakos later said the party's voters were "the equivalent of 30-40 army divisions".

At the height of its power in 2013, the party whose slogan is "Blood, Honor, Golden Dawn" topped 10 percent in surveys, making it the third most popular party in the country.

Denying any neo-Nazi affiliation and portraying themselves as anti-corruption nationalists, Golden Dawn attacked mainstream parties as "traitors" and "thieves".

They tapped into widespread anger towards the string of conservative and socialist governments that brought Greece to the brink of bankruptcy in 2010.

They also capitalized on a perceived rise in the crime rate, which they blamed on migrants.

Michaloliakos called illegal immigration a "wound" for Greece. His wife Eleni Zaroulia, who joined him in parliament in 2012, described immigrants as "sub-humans" in a speech to the chamber, saying they had "invaded" the country bringing "all sorts of diseases".