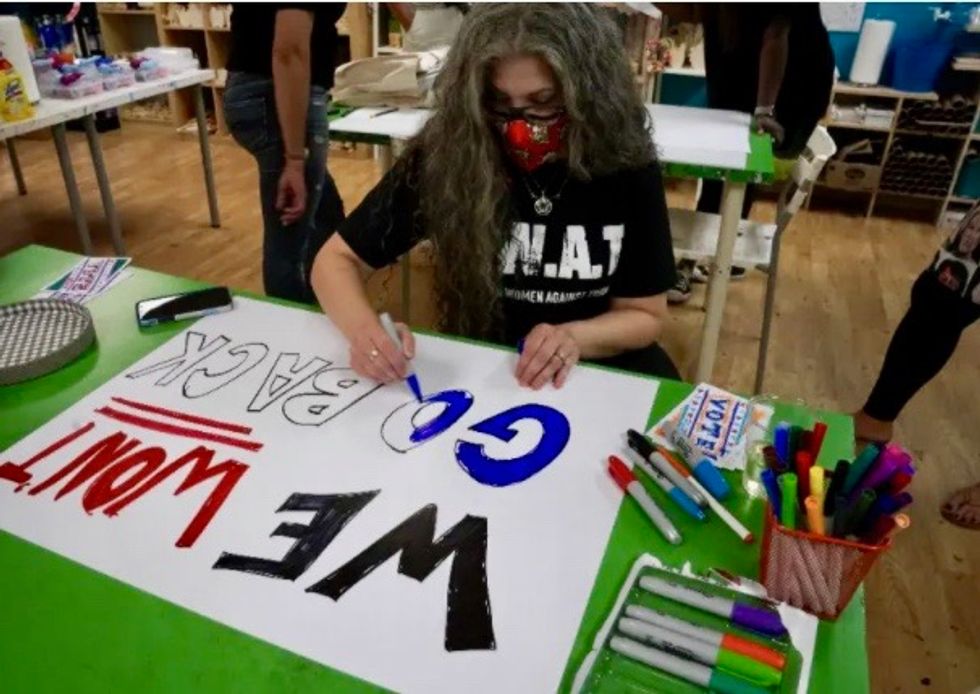 Shira Tarantino from Suburban Women Against Trump, or The S.W.A.T. Team, campaigns against the president's courting of female voters in the suburbs on October 15, 2020 in Stamford, Connecticut (AFP)

President Donald Trump is pleading with suburban American women to vote for him but with the election just four days away the polls suggest his appeal is falling on deaf ears.

"Can I ask you to do me a favor, suburban women? Will you please like me?" Trump said at a rally this month in Pennsylvania. "Please. Please. I saved your damn neighborhood, OK?"

The Republican president may insist that "women really like Trump," but the polls paint a different picture with Democratic candidate Joe Biden often leading by more than 20 points among suburban women.

Four years ago Hillary Clinton, the first woman to have a real shot at the White House, won a majority of the women's vote -- except for white women.

More than half of them supported Trump despite the release, shortly before the election, of a 2005 audio tape in which the New York real estate tycoon boasted of "grabbing" women by their private parts.

The erosion of Republican support among white suburban women gathered pace in 2018 when Trump's party lost the House of Representatives in the midterm elections.

In 2016, Trump won the overall vote in the suburbs over Clinton by 47 percent to 45 percent.

Biden, however, leads by 10 points among this key voting bloc in 2020 and according to polling website FiveThirtyEight, it is women who are driving the turnaround.

Trump's behavior, often seen as sexist, misogynistic and anachronistic, is believed to be the principal reason and he provided another example of it in Arizona on Wednesday.

During a campaign rally, he rushed Arizona's Republican Senator Martha McSally -- who is in danger of losing her seat -- on to the stage.

"Martha, just come up fast. Fast. Fast. Come on. Quick," he abruptly told her. "You got one minute! One minute, Martha! They don't want to hear this, Martha. Come on. Let's go."

Betsy Fischer Martin, executive director of the Women and Politics Institute at American University, said that research around the 2018 midterms found that Trump's "inflammatory comments" were a "source of intense concern" for women.

"Among women who identified as Republican, almost half said his rhetoric was troublesome to them personally," Fischer Martin told AFP. "And among white suburban women 51 percent said they found his language and tone 'very concerning.'"

Those who supported him despite their reservations put that down "to his actions and policies being more important to them," she said.

Two years later, "especially with his handling of the virus -– they are no longer giving him that same pass," she added.

Trump spends a good part of his rallies trying to convince suburban women to vote for him.

He has been accused of stoking racial tensions with his claims that Biden wants to "destroy" the suburbs and the "American Dream" and bring protests, crime and chaos to their neighborhoods.

The 74-year-old president also raised eyebrows this week with remarks about women during a rally in Michigan which seemed more at home in the 1950s than in the 2020s.

After saying he was getting children back in school, Trump said: "And you know what else? ... We're getting your husbands back to work!"

Pelosi added that the message "isn't even true" with millions jobless and many schools still closed due to the coronavirus pandemic.

"So completely removed from the realities of life," she said.

Women, like the US suburbs, have changed dramatically over the decades.

In 2016, stay-at-home mothers accounted for only 27 percent of American women, compared to 49 percent half a century earlier, according to a study by the Pew Research Center.

And many working women are among the victims of the Covid-19 crisis, having lost their jobs or forced to stop working to care for children.

"Today, suburban women are more concerned about Covid and the health of their families than they are of the far-off notion of protestors in their neighborhoods," said Fischer Martin.